President Obama has played a coy game on the Keystone XL pipeline, constantly delaying approval without committing himself fully to opposition. Coral Davenport and Ashley Parker today report out what Obama’s game is here: “People familiar with the president’s thinking say that in 2015 he might use Keystone as a bargaining chip: He would offer Republicans approval of it in exchange for approval of one of his policies.”

From Obama’s perspective, this plan makes perfect sense. The trouble is that Republicans almost certainly won’t trade him anything in return for the pipeline.

The superficial logic of a Keystone trade makes sense. Obama doesn’t really care about the project much one way or the other. He regards it as a sideshow with negligible effects on climate change. Republicans, on the other hand, constantly implore him to approve it. That would seem, on the surface, to lay the basis for a logical trade of one kind or another.

Uber Just Stuck a Knife in the Republican Party’s Heart
Conservatives: Let’s Shut Down and Impeach
Why Is This Bush Official Flip-Flopping on Obamacare?

The trouble is, there’s little reason to think Republicans actually care about approving Keystone. Its value to them lies entirely in its use as a talking point. The pipeline is an easy, tangible example of a thing they propose to create jobs. In fact, the number of jobs the pipeline would create is pathetically negligible — around 2,000 jobs a year for two years to build it, after which maintaining the pipeline would require about 35 jobs. But the number of jobs Keystone creates is not the point. The point is that it sounds like something that creates jobs, because describing an actual tangible project makes it easy to visualize how people would be put to work on it.

To be sure, there are policy changes Republicans actually believe would improve economic growth: cutting taxes for rich people, reducing spending on social programs, and deregulating the financial industry. The trouble is that all the things Republicans believe would actually create jobs are extremely unpopular. Keystone is a popular idea that can be sold as a Republican jobs plan. If you head over to the Republicans’ official site displaying its jobs plan, Keystone features prominently: 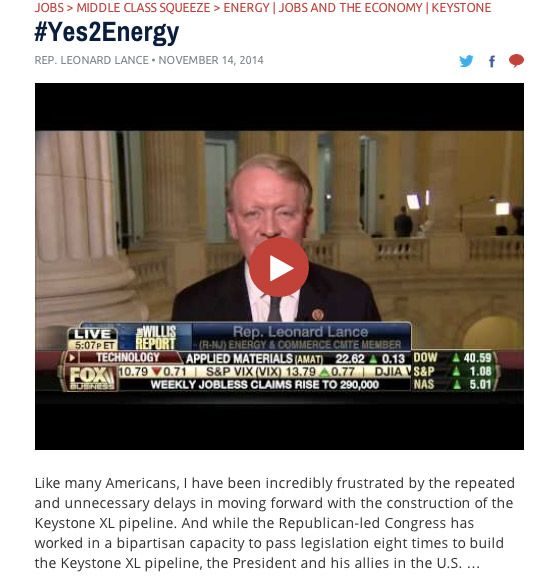 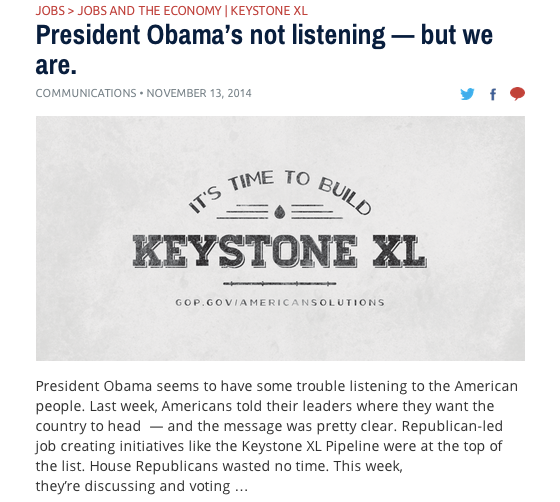 You have to ask yourself what Republicans would get out of the pipeline. It doesn’t carry much benefit for American energy firms — the benefits would flow to Canadian oil companies, who would otherwise have to find more expensive means to transport their product. The other primary benefit is almost surely that Obama opposes the pipeline. Talking up Keystone is therefore a way for Republicans to paint the president as standing in the way of economic progress. If Obama approves the Keystone XL pipeline, then Republicans pretty much have no jobs plan any more.

Republicans need to have a jobs plan. They’re much better off blaming Obama for standing in the way of the huge number of construction jobs that would be made available to hardworking Americans being blocked by the left-wing environmental agenda than they are taking credit for the pipeline. Republicans don’t like cutting deals with Obama even when he offers them something they want. In this case, the trade value of Keystone is negative. Which is to say, Republicans aren’t going to give him squat.