You win this time, Rove.

The lasting image of Fox News’s election coverage last time around was Karl Rove losing his mind when the network called Ohio, and therefore for the presidency, Barack Obama. You could practically see the smoke coming from his ears as Rove insisted that, by his math, Mitt Romney still had a chance. Megyn Kelly was forced to march back into the bowels of the network to confirm the call with the decision team as Rove melted down.

While the players were the same, the mood last night could not have been more different. Here’s Karl Rove, Chris Wallace, and Joe Trippi — “the Campaign Cowboys” — dressed, literally, as the whitest people imaginable. “I know I look ridiculous, but I figure by this time of the evening either you’re drunk or you have a sense of humor,” said Wallace. (Only the drunk part applied to Democrats.)

Megyn Kelly got in on it, too, re-creating her stroll back to the data guys. “We can see our friends from — you remember — last time,” she said, rising from the anchor desk. “You know the walk by now.” 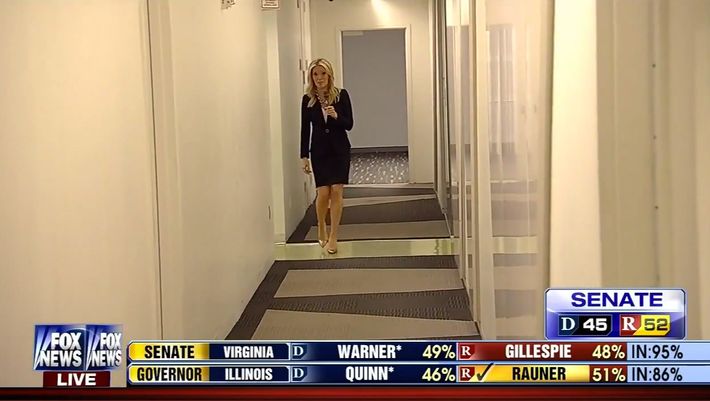 “Mr. Rove, you were the cause of this the last time — don’t think you can hide, little cowboys back there,” Kelly said on her way in, really hamming it up. “This is the long walk that a lot of people remember from 2012.” Upon arrival, she let loose an “I’m baaaack.”

As one network source put it two years ago, “This is Fox News, so anytime there’s a chance to show off Megyn Kelly’s legs they’ll go for it.” This time, it was under much happier circumstances.