Last week Jack Conte, of the treacle-sweet duo Pomplamoose, put up a post revealing the band’s tour revenue for 2014. There is none. Pomplamoose played 24 shows in 23 cities over 28 days, selling about $100,000 in tickets. But after costs, the tour ended up in the red. It is a vivid example of why you should forget your dream of being a rock star and become a programmer (or even just a Silicon Valley intern) instead. It is also a perfect encapsulation of how music’s middle class has gotten squeezed over the past 30 or so years, much as the American middle-class has.

While technology has given them a huge audience, sending several of their music videos massively viral, it has not done much to help them make a living. Fans pay nothing to watch those clips on YouTube, with the band netting only a few hundred dollars a month from the site, according to Conte. They make just $5,000 or so a month from iTunes and Loudr. And they likely make scant revenue from streaming services like Spotify.

But musicians are still making a lot of money on tour, right? Tickets to a live performance are a non-digital good that people pay a lot of money for, right? Well, here is the numbers-and-cents breakdown that Conte provided:

Granted, Pomplamoose probably could have come out in the black if they had taken fewer musicians on the road and upped their ticket prices. (A few of my music-savvy friends argued that the post showed Pomplamoose’s profligacy more than anything else, and Conte has responded to some of the controversy his numbers stirred up.) But even if they had increased their revenue from ticket sales by 50 percent and dropped their costs by 25 percent, say, the total profits would have worked out to only $10,000 or $15,000 per band member. That’s something, but not much.

The truth is that touring is hardly a big moneymaker for many bands. It’s expensive. It’s viciously competitive. It’s tiring. And not every band can command the $100 or $200 or $500 a ticket that acts like Beyoncé and Madonna can. As such, tour revenue has become more unevenly distributed among artists over time, exaggerating music’s superstar economy and contributing to the hollowing out its middle class. Per the Princeton economist Alan Krueger, the share of ticket revenue taken home by the top one percent of performers more than doubled between 1982 and 2003. In that last year, the top one percent took about 56 percent of all touring revenue, and the top 5 percent took nearly 90 percent. 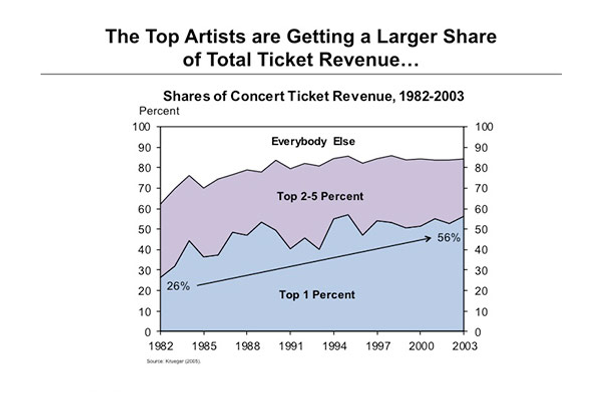 Who dominates that one percent? As with the American one percent, it is mostly old white guys (along with your big, headlining pop and country stars). Billy Joel, Bon Jovi, the Rolling Stones, and Bruce Springsteen charge a lot for tickets to a wealthy, loyal fan base that shows up, stadium after stadium, year after year.

In contrast, smaller acts like Pomplamoose are often struggling, even if they are popular and well reviewed. Conte reported that each of the band’s two members draws just a $2,500 a month salary. The Beta Band broke up in part because its members could not make a living doing what they loved, despite all their critical success. When they split a decade ago, they were close to $2 million in the red. Or take the example of Grizzly Bear, indie-rock royalty but barely getting by.

Bob Lefsetz, a music-industry analyst, argues that none of this is anything to moan about. “The middle is getting squeezed,” he writes. “Because everybody has access to the best all the time. Want to bring back the middle? Stop shopping at Amazon, stop going to Wal-Mart. Pay a grand for a flat screen. Drive miles for your music.”

But Pomplamoose points another way forward for the pinched middle. “We, the creative class, are finding ways to make a living making music, drawing webcomics, writing articles, coding games, recording podcasts. Most people don’t know our names or faces. We are not on magazine covers at the grocery store. We are not rich, and we are not famous,” Conte wrote. “We have not ‘made it.’ We’re making it.”

To that end, Pomplamoose have added another income stream to supplement the thin ones they have. They have adopted the benefactor or patron model, soliciting donations from people who love their music and videos on a Kickstarter-type site called Patreon, which Conte co-founded. It’s making about $6,371 per video.

+Comments Leave a Comment
The Music Middle-Class Is Getting Squeezed