On Wednesday, Malia and Sasha Obama donned regular teen attire — sweaters, skirts, et cetera — to once again stand behind their father as he conducted the annual Thanksgiving turkey-pardoning ceremony. It’s a corny tradition and, being teens, Malia and Sasha are allergic to corny traditions, so they made some faces and rolled their eyes a little. The girls actually handled themselves pretty well, considering they could have literally died from corniness exposure, but they still failed to meet the exacting standards of some woman who works for a Republican congressman from Tennessee.

Here’s what Representative Stephen Fincher’s communications director, Elizabeth Lauten, had to say about Sasha and Malia on Facebook: 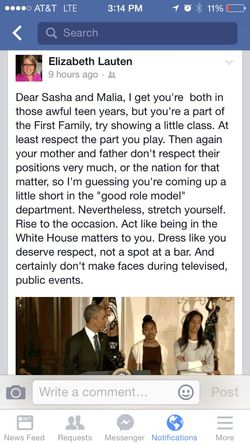 I reacted to an article and quickly judged the two young ladies in a way that I would never have wanted to be judged myself as a teenager. After many hours of prayer, talking to my parents and re-reading my words online, I can see more clearly how hurtful my words were. Please know that these judgmental feelings truly have no pace in my heart. Furthermore, I’d like to apologize to all of those who I have hurt and offended with my words, and pledge to learn and grow (and I assure you I have) from this experience.

Shortly after this all went down, Malia was overheard mocking Chuck Todd while Sasha smirked, so it seems they’ve recovered.

THE FEED
11:09 a.m.
the national interest
the national interest
How Trumpism Has Become a Cult of Losing
By Jonathan Chait
Why do Republicans still love a loser whose entire appeal was that he’s a “winner”?
10:30 a.m.
coronavirus
coronavirus
I Was a COVID-Vaccine-Site Bouncer
By Irin Carmon
The city tried to build a COVID volunteer corps. The system wasn’t prepared for the demand.
9:10 a.m.
intelligencer chats
intelligencer chats
The Political Costs of Ted Cruz’s Cancún Vacation
By Gabriel Debenedetti and Benjamin Hart
This scandal may do lasting damage to the Texas senator — but he’s got plenty of time to ride it out.

8:58 a.m.
conservatism
conservatism
The $15 Minimum-Wage Debate Clarifies the Partisan Economic Divide
By Eric Levitz
Republican “populists” oppose a $15 minimum wage because they stand for predatory small-business owners, not working people.
8:00 a.m.
politics
politics
The New CPAC Makes the Old CPAC Look Like the #Resistance
By Ben Jacobs
Trump critics are out, election truthers are in.
7:59 a.m.

Pfizer and BioNTech Studying Third Covid-19 Vaccine Dose to Fight New Strains
—Wall Street Journal
2/25/2021
the sports section
the sports section
Why Did Someone Pay $5 Million for a Baseball Card in 2021?
By Joe DeLessio
The pandemic isn’t the only reason the sports-card market has been booming lately.
2/25/2021
coronavirus vaccine
coronavirus vaccine
How to Sign Up for a COVID Vaccine in New York
By Matt Stieb
Two of the state’s largest vaccination centers opened this week at Medgar Evers College in Brooklyn and York College in Queens
2/24/2021
south dakota
south dakota
South Dakota Attorney General Reported Hitting a Deer But Fatally Struck a Man
By Matt Stieb
New details cast doubt on Jason Ravnsborg’s initial claim that he thought he hit a deer, not a person. He is now facing impeachment.
2/24/2021
sex scandals
sex scandals
Fanne Fox, Wilbur Mills, and a Tale of Washington Hubris
By Ed Kilgore
The woman involved in the implosion of one of Washington’s most bloated careers has died, and with her a golden era of D.C. sex scandals.
2/24/2021
media
media
Why Did First Look Let Go of Laura Poitras?
By Sarah Jones and Peter Sterne
A co-founder turns critic.
2/24/2021
goings
goings
Scandal-Plagued McKinsey Ousts Leader
By Andrew Rice
It is telling that partners at the elite and secretive consulting firm have chosen not to give Kevin Sneader a second term at the helm.
2/24/2021
the democrats
the democrats
Democrats Must Stop the IRS From Eating the Unemployed’s Stimulus Checks
By Eric Levitz
If Biden doesn’t forgive the taxes on millions of Americans’ unemployment benefits, they might not forgive him for their giant surprise tax bills.
2/24/2021