A mere half-century after the embargo of Cuba came into effect, the United States is moving to normalize relations with Havana — angering a lot of Cuban-Americans in the process.

“The liberalization policies aimed at easing trade and remittances to Cuba is another propaganda coup for the Castro brothers, who will now fill their coffers with more money at the expense of the Cuban people,” said Representative Ileana Ros-Lehtinen. “Even more than just putting U.S. national security at risk, President Obama is letting down the Cuban people, who still yearn to be free,” said Senator Marco Rubio.

Given the power of the Cuban-American voting bloc in Florida, did President Obama just torch Democrats’ hopes for winning the crucial swing state come 2016?

There are a number of questions embedded in that big one. Would Cuban-Americans credit or blame another Democrat for Obama’s actions? Will Democrats lose votes that they otherwise might have won owing to the shift in policy, or just harden votes that they would have lost? Is the Cuban-American voting bloc big enough to tip an election in the state?

The last question might be the easiest to answer: Perhaps, but for the fact that Cuban-Americans are becoming much less of a predictable “bloc” to begin with. According to a recent study by Pew, the proportion of Cuban registered voters who lean Republican has fallen from 64 percent to 47 in the past decade. The proportion who lean Democratic has jumped from 22 percent to 44 percent. What was once a bloc is now a divided constituency.

That shift is partly demographic, Pew found: Younger, American-born Cubans tend to be more Democratic, and there are increasingly more of them.

Is there a chance that President Obama’s policy might swing some Cuban-Americans back towards the Republican Party? Certainly, and we won’t know for sure until we get new polling data, likely in a number of weeks.

The same poll asked Cuban-American registered voters how likely they would be “to vote for a candidate for political office who supported the reestablishment of diplomatic relations.” Just more than half said they would, along with 75 percent of younger voters, ages 18 to 29.

That indicates that Obama’s radical shift in policy might not change the Cuban-American vote as much as you might think. Moreover, along with Obama’s executive action on immigration, it might help the Democratic Party to galvanize the broader set of Latino voters, with their support and turnout a crucial factor in Florida, Colorado, and a number of other swing states. 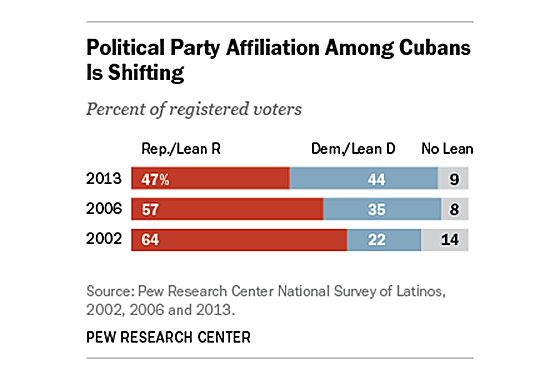