The MTA has unveiled its new “Courtesy Counts” campaign, and they are really covering the gamut of all the awful, annoying things people (note: never you!) do on the subway. While the anti-manspreader campaign has already gotten some attention, the MTA will install many different placards “bearing gentle, but firm reminders” on how to be a decent human being on your morning commute. 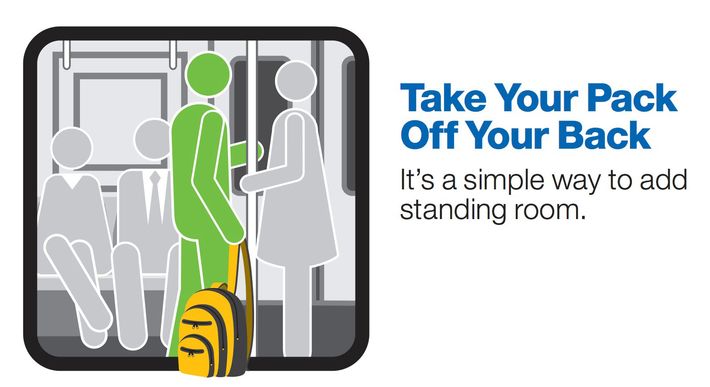 The campaign is broken down into “Do’s” — give up your seat for a pregnant lady, take off your backpack — and “No No’s” which are very gentle ways of telling riders to freaking stop doing certain things. The manspreader campaign (above) falls into this category, along with the dreaded, oft-smelly subway eater (below). Some of the other “No No’s” include blocking the doors, hogging the pole, and doing things you should do in the privacy of your own bathroom, such as clipping your nails (Slogan: “Clipping? Primping?”). Subway dancers have also landed on this list, and shall be reminded: “Pole[s] Are For Your Safety, Not Your Latest Routine.”

The MTA says the targets of the new manners campaign came largely from riders’ complaints. Expect the signs to start appearing in January on the subways, followed by buses and commuter rails the following month. Of course, if these ads fail, there’s always public shaming.