The already-strained relationship between Mayor de Blasio and the city’s biggest police union, the Patrolmen’s Benevolent Association, has gotten downright nasty. On Friday, a notice was posted to the PBA’s website. “DON’T LET THEM INSULT YOUR SACRIFICE!” it blared. “Download and sign a request that Mayor de Blasio and City Council Speaker Melissa Mark-Viverito stay away from your funeral in the event that you are killed in the line of duty. Completed forms may be given to your PBA delegate.” 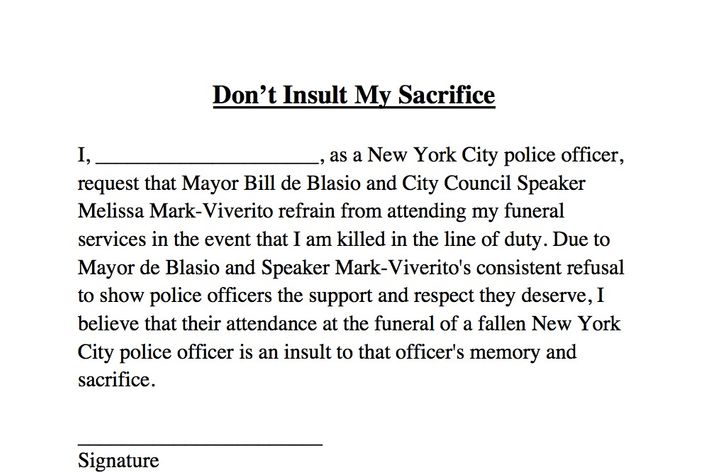 The PBA has never seemed fond of de Blasio, but the mayor’s response to the Eric Garner case seems to have pushed the union over the edge. De Blasio has declined to endorse the non-indictment of NYPD officer Daniel Pantaleo, saying only that he “[respected] the grand jury process,” and has since spoken several times about teaching his black teen son, Dante, to be careful around the police.

De Blasio and Mark-Viverito, who has backed the mayor’s effort to reform the NYPD, called the PBA’s attempt to ban them from potential cop funerals “deeply disappointing.” “Incendiary rhetoric like this serves only to divide the city, and New Yorkers reject these tactics,” they said in a joint statement. “The mayor and the speaker both know better than to think this inappropriate stunt represents the views of the majority of police officers and their families.”

On Saturday afternoon, Lynch insisted that the form reflected the feelings of rank-and-file cops. Speaking at a gathering for family members of NYPD officers killed in the line of duty, he said,  “The members said, ‘If they can’t support us now when we’re alive, they surely shouldn’t come to a funeral and have crocodile tears and sit next to my family.’” Expect to hear more of this as preparations for next week’s pro-cop rally continue.

THE FEED
9 mins ago
what we know
what we know
Salman Rushdie Is on the ‘Road to Recovery’ Following Gruesome Attack
By Chas Danner and Victoria Bekiempis
The acclaimed author was grievously wounded and remains hospitalized but was taken off a ventilator and again able to speak on Saturday.
6:29 p.m.
the city politic
the city politic
New York Times Sticks It to Progressives in New York’s Democratic Primary
By Ross Barkan
The editorial board’s backing of Dan Goldman, Jerry Nadler, and Sean Patrick Maloney for Congress also shows a disdain for identity politics.
1:58 p.m.
u.s. capitol
u.s. capitol
Man Dies by Suicide After Driving Car Into Barricade Near U.S. Capitol
By Chas Danner
The man drove into a barricade and fired a gun in the air, but police don’t seem to believe he was targeting any members of Congress.