Weeks of protests against the grand jury decisions in the Mike Brown and Eric Garner cases culminated in two massive demonstrations on Saturday. Organizers say that as many as 25,000 people showed up for the Justice for All march in Washington, D.C. Chanting “Hands up, don’t shoot!” and “I can’t breathe,” the protesters made their way from and down Pennsylvania Avenue before arriving at the U.S. Capitol, where Al Sharpton, several politicians, and family members of unarmed black men killed by police officers — including Gwen Carr and Esaw Garner (Garner’s mother and wife, respectively), Kadiatou Diallo (Amadou Diallo’s mother), and Lesley McSpadden (Mike Brown’s mother) — addressed the crowd.

Meanwhile, in New York, tens of thousands of people participated in the Millions March, which began at Washington Square Park and ended at One Police Plaza. The New York demonstration continued well into the night, with protesters streaming onto the Brooklyn Bridge and shutting down traffic for several hours.

“We’re not anti-police — we’re anti-brutality,” said Sharpton, who urged Congress to pass legislation that would make it easier for federal authorities to step in to cases involving police brutality. He also demanded that special prosecutors handle cases involving police misconduct and that the Department of Justice fund a division to deal with the issue.

“My husband was a quiet man, but he’s making a lot of noise right now,” said Esaw Garner. “His voice will be heard. I have five children in this world and we are fighting not just for him but for everybody’s future, for everybody’s past, for everybody’s present, and we need to make it strong.” 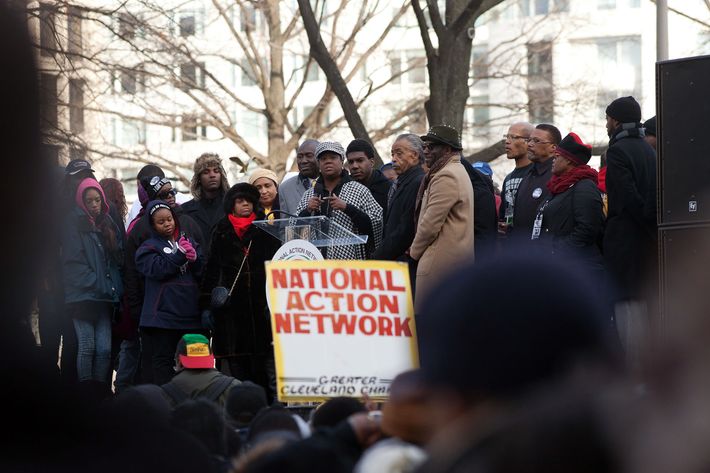