The St. Louis County police force is on a real roll. After heading up the brutal crackdown on this summer’s protests in Ferguson, as well as the comparatively less terrifying response to the demonstrations that followed Darren Wilson’s non-indictment, the department threw a fit when members of the St. Louis Rams used the “hands up, don’t shoot” gesture at a Sunday game. Apparently not content with the (overwhelmingly negative) attention they received for fighting with the Rams over the definition of the word apology, the St. Louis County cops decided to weigh in on the death of Tamir Rice.

Tamir is the 12-year-old boy who was recently shot by police officer Tim Loehmann, apparently because the cop mistook the child’s Airsoft gun for a real weapon. Of course, this happened in Cleveland — not St. Louis, or anywhere near it. Still, this what the St. Louis County Police Department’s Fenton precinct decided to post to Facebook last night: 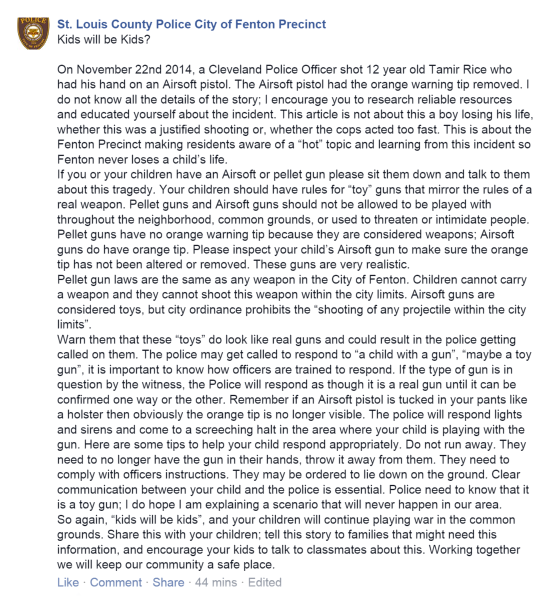 Why did the cops serving the area where Mike Brown lived  (and died) feel the need to defend the police shooting of another unarmed black kid over 500 miles away? It’s difficult to say.

The post has since been removed. A St. Louis County Department spokesperson says they’re “trying to figure out” who actually wrote the thing.

The @stlcountypd tweet/FB post on Tamir Rice was written by police officer Aaron Dilks, he tells me. I asked if he regretted it. He hung up.

“I too was a kid, and I too would have done the same thing as Tamir Rice did. I was allowed to go play with guns, and have BB guns — we didn’t have Airsofts at the time. The point of the ‘kids will be kids’is that’s what kids will do,” Dilks explained when contacted by Mediaite. “The point of putting [the post] out was to educate and make sure something like this doesn’t happen in the city of Fenton or in our area.”

He added, “It’s a tragedy. It’s a shame that a child got shot. I guess that’s all I should probably say about it.” Probably.

Update II: St. Louis County Police Department Chief John Belmar apologized for the Dilks’s Facebook post with his own Facebook post. “While the post did not originate from the Chief’s Office and I was unaware of its presence prior to its release, I realize the message was insensitive to Tamir’s family and the sorrow they are currently experiencing,” he wrote. “I want to emphasize that my officers respond to calls with discernment, and have the highest regard for human life. We train officers to take all facts and circumstances into consideration when making decisions about using force.” Belmar also announced that he had “altered” his force’s social media policy in order to “prevent future occurrences” of enraging people.