The budget (which is being called the “Cromnibus,” for reasons you don’t need to know) contains usual business-friendly provisions that find their way into every bipartisan measure. Beloved moderate Republican Susan Collins of Maine personally managed to appease the potato lobby, by exempting its starchy fare from the school nutritional standards developed by experts, and the trucking lobby, by suspending regulations designed to keep sleep-deprived truckers off the road. Senator Collins has successfully cooperated with both sides of the aisle to make our country a fatter, more dangerous place.

But those banal pro-business measures would have attracted little attention. The thing that has real potential to kill the bill is a small measure to weaken financial regulation. The budget bill would eliminate Section 716 of the Dodd-Frank financial reform, which bars federally insured banks from investing in part of the derivatives market. As Erika Eichelberger reports, this measure was drafted almost word-for-word by Citigroup: 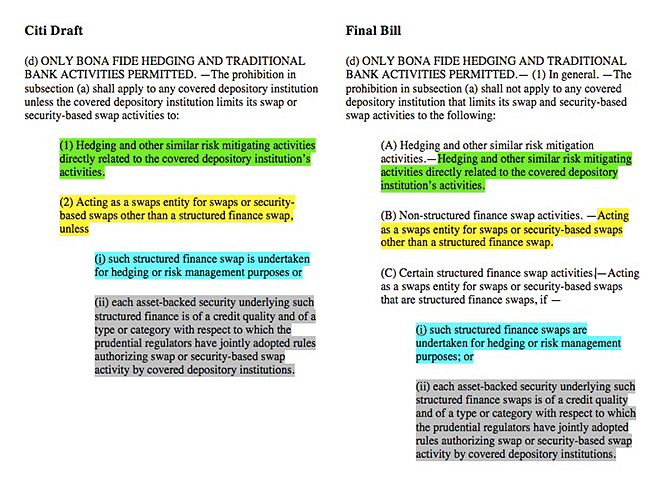 Eliminating this provision is not a world-ending measure. It’s also not a good idea. As Mike Konczal explains, eliminating this provision will increase financial risk, by encouraging big banks to engage in more risky trading. Elizabeth Warren has pledged a fight to stop the bill. The Obama administration, which previously opposed this rollback as a stand-alone measure, hasn’t said whether or not the president will veto the budget over it. John Boehner is warning that a big fight in Congress could ruin Christmas. (For Congress, not the rest of us.)

🎄⛄️❄️Boehner: "If we don't get finished today, we're going to be here until Christmas." 🎁🎉🎄#MerryMerry

The sudden discovery of the derivatives provision could actually threaten to sink the budget and shut down the government. Boehner already faces defections from conservatives, who are angry that the bill doesn’t stop Obama’s immigration reforms. (That is because Congress lacks any power to stop these executive actions, but conservatives don’t care.)

If you add the liberal defectors to the conservative defectors, you have a possible majority coalition to vote it down. Alternatively, Obama could veto the measure. It might sound crazy to veto a bill keeping the government open over a relatively small-scale financial regulation. But this is the sort of issue where the public is primed to side with Democrats. People justifiably hate big banks and distrust their ability to manipulate the financial system. Weakening financial regulation obviously has nothing to do with the budget or keeping the government open. If Obama decides to veto the bill over the proposal (which, to be sure, commands bipartisan support), he will place Wall Street’s allies in the uncomfortable spot of having to publicly defend a position they had hoped to debate quietly among friends and fund-raisers. If he signs the bill, he’ll have handed Warren a powerful cudgel to use against him. What seemed like a low-stakes, keep-the-lights-on measure has suddenly turned into a trap for both Obama and Congress.

+Comments Leave a Comment
Wall Street Giveaway Could Cause Shutdown

THE FEED
3:00 p.m.
2022 midterms
2022 midterms
Brian Kemp May Be Outfoxing Donald Trump
By Ed Kilgore
Despite Trump’s vows of vengeance against the Georgia governor, he cannot find a top-tier candidate to run against him.
11:39 a.m.
covid-19
covid-19
The Implications of the Lab-Leak Hypothesis
By David Wallace-Wells
The epidemiologist Marc Lipsitch explains the risks of the virus research done at the Wuhan Institute.
9:20 a.m.

'I was completely inside': Lobster diver swallowed by humpback whale off Provincetown
—Cape Cod Times

7:00 a.m.
the national interest
the national interest
Biden’s Biggest Danger is Congressional Democrats Afraid to Tax the Rich
By Jonathan Chait
Behind the scenes, Democrats are knifing the administration’s legacy.
6/11/2021
awards
awards
Darnella Frazier, Who Filmed George Floyd’s Murder, Gets Pulitzer Nod
By Nia Prater
The Pulitzer board awarded her a special citation, saying her video showed ”the crucial role of citizens in journalists’ quest for truth and justice.”
6/11/2021
politics
politics
Merrick Garland Unveils Plan B for Protecting Voting Rights
By Ed Kilgore
As new congressional legislation stalls, the Justice Department will utilize the powers it already possesses to fight voter-suppression measures.
6/11/2021
explainer
explainer
What’s Driving the Surge in Ransomware Attacks?
By Matt Stieb
From gas to meat, hackers keep disrupting large sectors of the economy. Here’s why the attacks are getting easier and what’s being done to stop them.
6/11/2021
nyc mayoral race
nyc mayoral race
Maya Wiley and Eric Adams Trade Jabs Over Cops and Guns
By Nia Prater
During the most recent NYC mayoral debate, Wiley declined to say whether she would disarm NYPD officers. Adams called her answer “alarming.”
6/11/2021
covid vaccines
covid vaccines
Johnson & Johnson Must Toss 60 Million Vaccine Doses Made at Troubled Plant
By Chas Danner
Only ten million J&J doses produced by Emergent BioSolutions’ Baltimore facility have been cleared for use.
6/11/2021
2021 california recall election
2021 california recall election
Why Recall Fever Is Sweeping California
By Ed Kilgore
Easy rules, intense reaction to COVID-19 restrictions, and a Republican Party with nothing better to do have all fueled a wave of recall drives.
6/11/2021
poltiics
poltiics
Will Women Be Required to Register for the Military Draft?
By Ed Kilgore
After the Supreme Court dodged the question, Congress could move to include women — or abolish registration altogether for the first time since 1940.
6/11/2021
department of justice
department of justice
Trump DOJ Seized Adam Schiff’s Records in Search for Leaks
By Matt Stieb
Prosecutors seized metadata of the top House Intelligence Democrat, Eric Swalwell, and a minor in a failed hunt to find those leaking to reporters.
6/11/2021
side effects
side effects
CDC Flags Rare Cases of Heart Swelling in Young People After COVID Jab
By Paola Rosa-Aquino
Reported myocarditis cases make up a tiny fraction of the nearly 130 million Americans who have had both doses of the Pfizer or Moderna vaccine.
6/11/2021
intelligencer chats
intelligencer chats
Why It’s So Hard to Hire Restaurant Workers Right Now
By Chris Crowley and Benjamin Hart
For one thing, the pandemic allowed servers, cooks, and others to reevaluate their place in a precarious industry.
6/11/2021

Feinstein, asked about some Dems saying they’d choose democracy over the filibuster: “If democracy were in jeopardy, I would want to protect it. But I don’t see it being in jeopardy right now.”
—@AndrewSolender
6/10/2021
politics
politics
Joe Manchin’s Silent Partners in the Senate
By Ed Kilgore
The West Virginian is happy to take the heat for Democrats who quietly oppose filibuster reform, and they are happy he’s happy.
6/10/2021
inflation
inflation
Why Inflation Is Lower Than It Looks
By Eric Levitz
Prices are returning to the pre-pandemic norm, which looks like a giant spike in annual inflation.
6/10/2021
environment
environment
Keystone XL Pipeline Canceled
By Paola Rosa-Aquino
The developer is ending the controversial pipeline project, which would have pumped 800,000 barrels of Canadian crude oil to Nebraska per day.
6/10/2021
d.c.
d.c.
Inside the Big-Donor Scramble for a Biden Ambassadorship
By Gabriel Debenedetti
“They are the closest things we have to somebody being declared a lord or a lady.” But the White House might be changing the rules.
6/10/2021
covid-19
covid-19
The People Who Transformed Themselves During the Pandemic
By Eve Peyser
Is there such a thing as post-traumatic growth?
6/9/2021
nyc mayoral race
nyc mayoral race
Where Exactly Does Eric Adams Live?
By Matt Stieb and Nia Prater
Mayoral front-runner gave a tour to the media of a Brooklyn brownstone he owns following a report that suggests he may be shacking up in New Jersey.