Our current issue invites a wide array of contributors to address the question of how the Obama administration will eventually be seen in historical retrospect. My contribution treats this as two different questions. One of them is: Should history regard Obama as a success? To which I reply: Surveying his long list of policy accomplishments and very short list of failures, absolutely so, at least to date. The other question is: Will history give him the due I believe he deserves? That turns out to be a more complicated question, because history itself is filled with myth. Indeed, if you read through the contributions from the historians surveyed in our issue, you’ll find plenty of them comparing the president to a Sorkin-esque fairy story in which the hero bends the hard interests of a hostile Congress to his will with rhetorical magic. Historical myths, I argue, can last a long time.

This point came home to me when I recently read (at the recommendation of Ed Kilgore) Stephen Budiansky’s The Bloody Shirt,a history of Reconstruction-era violence. Now, if you remember your high-school history, you know what the “bloody shirt” means. It describes how post–Civil War Republican politicians whipped up their supporters by associating the Democratic Party with bygone misdeeds. The phrase itself lives on in the political lexicon as an epithet for any demagogue who whips up old hatreds.

I had always believed the bloody shirt was the garment of a slain Union soldier, held aloft years later. In fact, Budiansky points out, the phrase was used to describe contemporaneous post–Civil War violence. In 1871, Klansmen in Mississippi accosted Allen Huggins, a northerner who had helped educate freed slaves, thrashed him within an inch of his life, and threatened to kill him unless he left the state. The bloody shirt was Huggins’s, allegedly waved by Republican Benjamin Butler on the House floor just a few weeks later. It was not the relic of an ancient feud but evidence of an ongoing epidemic of rampant violence. That the bloody shirt came to stand for unfair denunciations of violence rather than the violence itself was a triumph of southern propaganda.

What’s more, Budiansky reports, there is no evidence that Butler ever waved the bloody shirt at all. That vivid detail was a figment of white supremacists’ imagined victimization.

And yet it has entrenched itself in the American historical memory. It is not neo-Confederates who have nurtured the myth. It continues to be recycled by progressive media, like Daily Kos:

For two generations after the Civil War, the Republican Party routinely won elections by running against the Confederacy and Jeff Davis (with a healthy dose of anti-Catholicism thrown in for good measure). One particularly inventive GOP candidate even took to carrying the alleged shirt of one of his martyred comrades around to his stump speeches. At the emotional climax of his rant against the treasonous Democrats and their papish ways, he would thrust the soiled, ragged garment over his head for the audience to see — thus the phrase “waiving [sic] the bloody shirt.”

… and Salon (“Sept. 11 was to be Bush’s ‘waving of the bloody shirt,’ a strategy Republicans used in post–Civil War presidential campaigns for more than 30 years against the Democrats who were still tainted by the Confederacy.”) … and The New Republic (“In response, Republicans repeatedly “waved the bloody shirt” to remind Americans that it was they — the party of Lincoln — that had preserved the Union through the late war”).

The liberals recirculating this myth are not consciously doing the bidding of the white supremacist South. They have merely been taken in by the pernicious myths they — we — learned in school. Here’s a passage from a very mainstream 2009 high-school history textbook, The American Past, by historian Joseph Conlin: 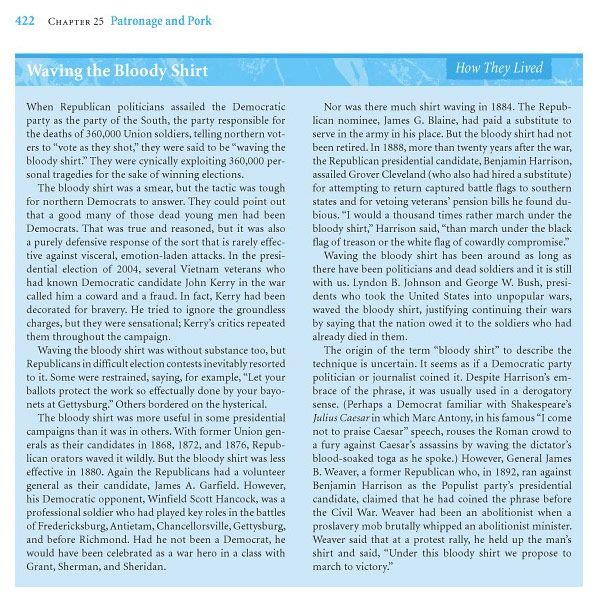 It is as if historians and even liberals 150 years in the future were repeating as fact that Obama created death panels. The bloody shirt is a lie — it is a lie in the specific detail, and it is a lie in its broader implication that Republican politicians rhetorically exploited the past crimes of the white South. But the history of this period was written by the perpetrators and allies of a white supremacist terror campaign. And their broader effort to tar Reconstruction as the corrupt, overbearing project of carpetbaggers — rather than a heroic yet doomed campaign to bring real freedom to former slaves — has itself reverberated throughout history. That is why I distinguish between the place in history Obama’s accomplishments (to date) deserve and the place they may get. History is a political argument extended over a longer duration.

THE FEED
8:00 a.m.
games
games
There Is No Fixing This
Tua Tagovailoa’s ugly injury is the latest reminder that no policy change can excise brutality from the NFL.
8:00 a.m.
the money game
the money game
Mohamed El-Erian on the Looming Recession — and What He’s Doing With His Money
By Jen Wieczner
“I don’t know how to convey it, but we came very close to a financial accident in the U.K,” says the markets guru.
10/4/2022
the sports section
the sports section
Aaron Judge Did It
By Joe DeLessio
The Yankees slugger hit his 62nd home run, breaking a still-sacred baseball mark. He’s also having a pretty good season in other categories.