The coolest pontiff in recent memory may not judge us common sinners, but he sure has some strong words for the cartoonists of Charlie Hebdo: Just because you can insult someone’s faith, doesn’t necessarily mean you should. Good thing it looks like most of them were lapsed Catholics, anyway.

Charlie Hebdo, the magazine attacked last week for publishing caricatures of the Muslim prophet Muhammad, is an equal-opportunity offender. Though its work is punctuated by a particularly strong current of Islamophobia, Jesus and the Catholic Church were also frequent targets: 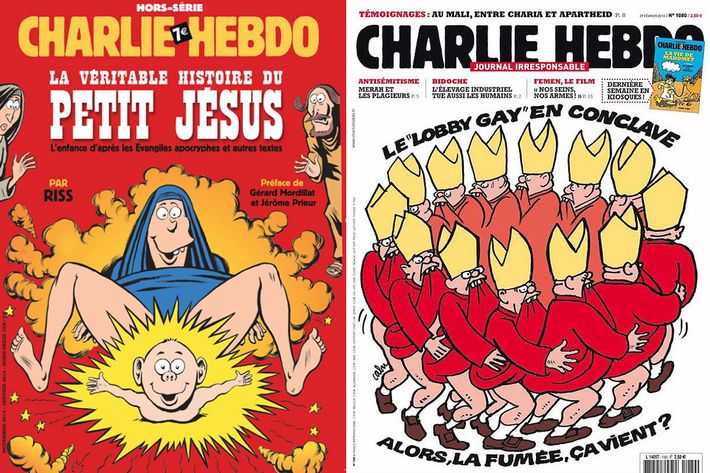 Last week, the Vatican joined with four French imams to condemn the attack. Their statement said that “the world is in danger without freedom of expression,” but urged the media to consider respecting the faiths of others while exercising that right. The pope’s Thursday statements fell along similar lines, and he condemned the attack as an “aberration.”

“There are so many people who speak badly about religions or other religions, who make fun of them, who make a game out of the religions of others,” he said. “They are provocateurs. And what happens to them is what would happen to Dr. Gasparri if he says a curse word against my mother. There is a limit.”