In Paris this week, where I thought I’d spend most of my time taking advantage of the ubiquitous half-price sales, I ended up covering a massive protest rally Wednesday night at Place de la République, hours after editors and illustrators at the satire magazine Charlie Hebdo were massacred by Islamic terrorists. I wrote that I was moved by how bravely, broadly, and swiftly Parisians turned out for freedom of expression and French secular democracy, but a bit dismayed at a crowd that, to my eyes, looked about 99 percent white — this in a city awash with people from all over the Middle East, Africa, the Caribbean, and Asia.

Today, I stood for three chilly hours on the sidewalk on Boulevard Voltaire, between République and Place de la Nation, to watch the Paris contingent of what apparently, at more than 3.7 million people nationwide, was France’s largest rally in history, topping the throngs that took to the streets when the Allies liberated the country from the Nazis. The crowds surging down the boulevard today were so big, so endless, I felt like I was watching nearly toute la France sweep by, wave after massive wave of people — young and old, proletariat and bourgeois, secular and religious (judging by their signs). The vast majority of faces were white, but there was no denying the multiculturalism of modern-day metro Paris judging from the sizable diversity in the crowd.

Yet amid the sheer size of the crowds, I was struck, yet again, by how quiet people were overall, in contrast to the steroidal, rah-rah racket of an American rally. There were no drum circles and little chanting; occasionally “La Marseillaise,” the French national anthem, was sung, but certainly not by everyone; and though the French flag dotted the crowds, it wasn’t ubiquitous in the way that the American flag was post-9/11. What was ubiquitous was the simple black-and-white “Je Suis Charlie” sign, which emerged today with all sorts of variations: “I am Charlie” plus “I am Jewish,” or “I am Muslim,” or “I am a Journalist,” or “I am a Secularist.” I saw no Islam-baiting signs unless you want to count those that bore some of the Charlie Hebdo images that courted so much controversy in the first place, including one of Mohammed gnashing his teeth over fundamentalists and another of a Muslim man and a male cartoonist making out that reads “Love is Stronger Than Hate.” 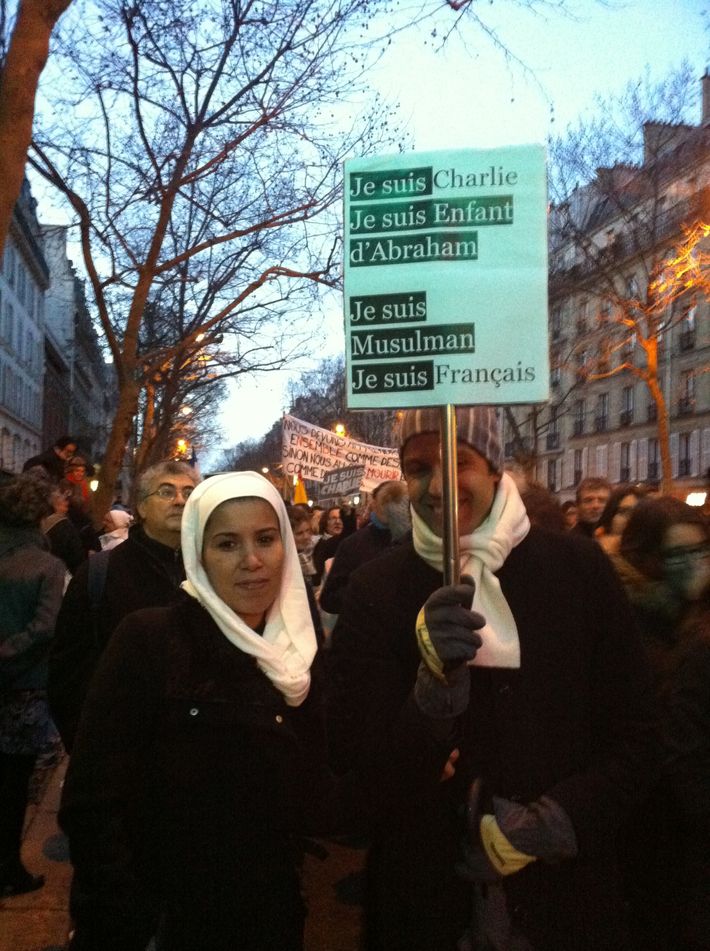 When I commented to the middle-aged woman to my left on the overall somber tone of the crowd, she said, “This is a mourning.” And indeed, it did feel as though French citizens had turned out not to swagger and boast American-style about their won’t-back-down-ness but simply to state it soberly as a giant fact to the world. Not that the mood was completely funereal: People chatted and laughed and, this being Paris, of course smoked as they marched. (They don’t seem to have selfie fever like we do in the U.S., though, mercifully. And they don’t march with venti Starbucks in hand, either.) I was standing in a Sephardic Jewish neighborhood and, every once in a while, someone would step out of the crowd to greet friends. It seemed as though if “Je Suis Charlie” were the day’s No. 1 poster, “Je Suis Juif” or “Juive” was No. 2. I found that a very moving show of resolve on the part of Paris’s Jewish population, so shaken after the Charlie killings were followed two days later by the taking of hostages and, ultimately, four deaths at Hyper Cacher, a kosher supermarket on Paris’s eastern edge. I asked a young Jewish university student if he was moved to leave France for Israel, as some 5,000 Jews reportedly did last year.

“I don’t want to leave,” he told me. “That would be showing intimidation.”

Eagerly, I waited for François Hollande, France’s beleaguered president, and leaders of dozens of other countries, in town for the march, to appear. But word made its way up Boulevard Voltaire that they’d all quickly disappeared into cars after an initial appearance together at République. Instead, the crowd applauded respectfully when the police escorted past us a contingent of families of the slain, then shouted many a “Merci!” as some of the country’s national police force, who’ve had a tough week to say the least, marched by. Another phalanx carried a towering, white-robed puppet of Marianne, the knife-wielding symbol of the French republic. Eerily, symbolically, she shook and staggered in the wind. At one point, she almost fell over, but when her handlers managed to set her aloft again, the crowd cheered. 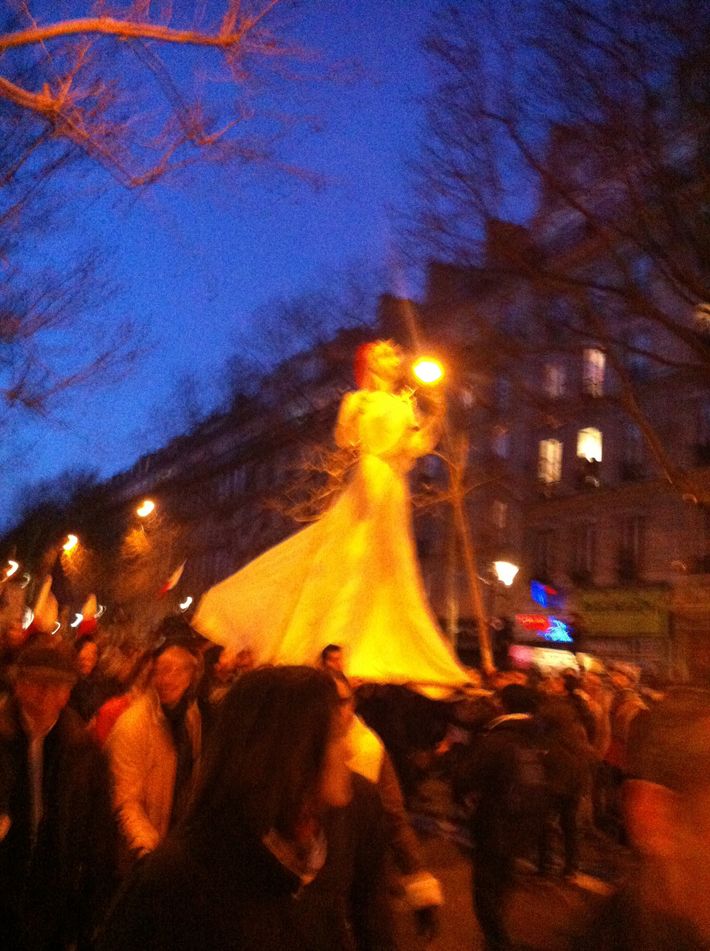 I had but one disappointment. I’d wondered if I’d see anyone who looked like the residents of Rue de la Goutte d’Or, a street in north Paris I’d lived near that, daily and nightly, teems with working-class North Africans and Arabs, the veiled women manning the weekend markets and the men hawking contraband cigarettes. Perhaps in my identity-hyphenate American manner, I’d thought how rousing it would be to see large swaths of people carrying signs that read “Je Suis Musulman et Je Suis Français.” After all, France’s right-wing, anti-immigration National Front had been banned from the march, whether you think that’s right or wrong. (And that’s far from the only way France bans free expression, for all of this week’s free-speech rhetoric.) The subways were even free today, to encourage people to participate.

I watched the march for three hours to see if such a bloc would emerge. Amid the tens of thousands who passed me, it never did. I remember seeing one older veiled woman, surrounded by girls who seemed to be her daughters or granddaughters, and I wondered if she’d had to muster courage to attend, but she was swept along in the march before I had a chance to ask her. One guy passed with a funny sign that said, in English, “I’m Muslim — don’t panic!” A sizable group of Syrian marchers received robust applause as they passed. But it wouldn’t be true to say that, at any point, I saw a large, explicit Muslim presence. Were they afraid to come? Were they alienated by it all?

Playing slightly dumb, I asked a group of fellow watchers, “Aren’t there any Muslims?”

Another man laughed bitterly and said, “It’s not worth their time!”

At one point, a man and a woman marched toward me, the woman veiled. The man held a sign that said, “I am Charlie. I am a child of Abraham. I am Muslim. I am French.”

I asked if I could take a picture and they accommodated me. “Have you been harassed at all today?” I asked bluntly.

“Not until now!” the woman shot back at me. We had a laugh. And it felt really good.

THE FEED
5:16 p.m.
the talented mr. santos
the talented mr. santos
Here’s Every Single Lie Told by George Santos
By Matt Stieb
Navigating the many exaggerations and falsehoods of New York’s newest representative.
3:56 p.m.
life after roe
life after roe
RNC Tells Republican Politicians to Stay Extreme on Abortion
By Ed Kilgore
The RNC passed a resolution scolding politicians who backed off after the end of Roe v. Wade and urging them to stay on the offensive in 2024.
2:47 p.m.
creature capers
creature capers
The Hunt Is on to Find the Dallas Zoo Bandit
By Matt Stieb
Police are looking for whoever is responsible in a strange crime wave in which animals have been killed and apparently stolen from the zoo.