In 2000, Andrew Sullivan was best known as a conservative, often brilliant, sometimes infuriating essayist and former editor of The New Republic. That summer, he began writing what was still called a weblog, posting a few items a day under the title “The Daily Dish.” He was pugnaciously pro-Bush and anti-Clinton. Over nearly 15 years, starting with no staff and ending with a small one, Sullivan shifted his politics (if not his philosophy) from defending Bush and the Iraq War to fiercely rejecting both, and from there to uneasily endorsing Kerry and eventually helping to shape the Obama narrative. The interests of his blog were both general and personal, an eclectic mix that included Catholicism, pot, beards, beagles, and especially gay marriage, the case for which he started making years before anyone believed it remotely possible. His integration of reader commentary into the blog created its own form and inspired devotion: When he revealed on February 4 that he was closing down the Dish, one fan offered an annual subscription of $5,000 to keep the site going. A dip into the archive makes a case for Sullivan’s outsize influence on the politics of the new century. 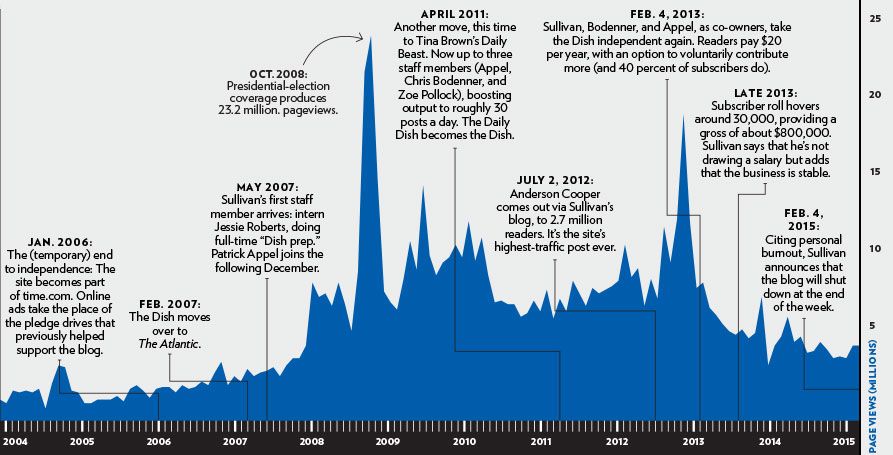 Summer 2000: Begins blogging at andrewsullivan.com, under the title the Daily Dish. (The first few months’ posts are now lost.)

Jan. 2, 2001: First archived item: a response to a Mickey Kaus column in Slate. “Kaus has an item which almost implies I was sunning with [Donald Rumsfeld] in flagrante delicto … Ahem. All I meant is that I was a vacation guest of a family close to the Rumsfelds.”

Jan. 18, 2001: New technology! “A couple of small improvements on the site … [I’m now] able to include links in the text … so you can see what on Earth I’m going on about. The other aspect is that you’ll be able to see exactly when I post items.”

Jan. 20, 2001: On the Bush-Gore Florida re-count: “Don’t hold your breath for the New York Times or the Washington Post to report this … Bottom line: Florida wasn’t stolen by anyone. It was nearly stolen by someone. And that someone wasn’t Bush.”

Jan. 16, 2001: “If civil-rights activists could sit still at a segregated lunch counter, then gay men and women can simply get married in a church or civil ceremony.”

Jan. 21, 2004: “I predict that in ten years’ time, there will be clear majorities for what is a very minor and humane reform.”

June 26, 2013: On the morning of the Supreme Court’s Windsor decision: “It is the most liberating feeling to hear your once near-solitary voice blend finally into a communal roar until it isn’t your voice at all any more. It’s the voice of justice.”

June 19, 2014: Regarding misplaced credit: “One of the more unusual aspects of the marriage-equality movement was the vital early and ­continuing role of gay conservatives … We were lampooned by the left … even earning the term homocons in the 1990s. And when you read [Ted] Olson’s arguments, you find that they contain nothing that I and Bruce Bawer, Jon Rauch, Dale Carpenter, John ­Corvino and many others hadn’t already pioneered.”

Sept. 11, 2001: “When our shock recedes, our rage must be steady and resolute and unforgiving.”

May 17, 2003: The turn. “All the signs are pointing to a serious screw-up in Iraq … A devastating account from a pro-war writer … suggests that the state of affairs there is spiraling out of control.”

Oct. 30, 2004: Endorses John Kerry. “Did I turn against Bush because of the war failures? Or because of the Federal Marriage Amendment? … Well, the great thing about a blog is that … you can see all the evidence.”

Feb. 26, 2009: Out front again: “As this ­depression leads to greater and greater questioning of this era’s Prohibition of a substance far less toxic and socially disruptive than alcohol, economists are beginning to assess the fiscal benefits of decriminalizing marijuana, especially for medical uses.”

A Conservative for Obama

July 28, 2004: After the convention speech: “I don’t know enough about Barack Obama to judge whether he will be a good senator on a range of issues, but from his speech tonight, it’s hard to think he has anything but a stellar future … Obama is the Democrats’ hope. Heck, he is the hope for all of us.”

July 17, 2007: “A small-c conservative can consider backing a liberal if all the viable ‘conservatives’ are corrupt, divisive, shallow, in hock to religious fanatics or palpably unserious about national security.”

Oct. 8, 2012: After Obama flops in his first debate with Romney: “The Pew poll is devastating. … Has any candidate lost 18 points among women voters in one night ever? And we are told that when Obama left the stage that night, he was feeling good. That’s terrifying.”

Nov. 6, 2012: Election Night. “[I’ve been] foreseeing … a real possibility of profound and necessary change in America over the next four years.

Nov. 4, 2014: The midterms: “Easy cynicism and cheap piling on are not, in my view, what he deserves. What he deserves is our support—while we are still lucky to have him in the White House. And that ­support should not end as the GOP wins tonight and as the Clintons hover in the wings.”

On Sarah (and Trig) Palin

June 13, 2011: Sullivan’s most outlandish pet issue comes to the fore. “It’s possible that Palin simply made up her drama of labor, or exaggerated it for effect … and she gussied that up into a tall tale of her pioneer spirit, guided by her doctor, who refused to take the NYT’s calls as soon as Palin hit the big time. I think that’s the likeliest explanation, given the sheer world-historical weirdness of the alternative. But it’s also possible that she never had that baby at all.”

Oct. 30, 2013: After years of outrage at Pope Benedict XVI and institutional Catholicism, a breath of fresh air: “A little boy wanders on stage with Francis and won’t let him go. I’m struck by a simple fact: This happened to Jesus a lot, and his response—even more revolutionary in his day—was Francis’s: ‘Let the children come to me and do not prevent them; for the kingdom of God belongs to such as these.’ From raping children to seating them on the papal chair. Know hope.”

Feb. 6, 2015: “Being honest means writing things that will make you look foolish tomorrow; it means revealing yourself in ways that are not always flattering; it means occasionally saying things that prompt mass acclamation but in retrospect look like grandstanding … It is a terrifying and exhilarating way to write—and also an emotionally, psychologically depleting one. But I loved it nonetheless. I relished it every day. I wouldn’t trade these years for any others.”

*This article appears in the February 23, 2015 issue of New York Magazine.