Lawrence Kudlow, the CNBC pundit and Republican adviser, has co-founded the “Committee to Unleash American Prosperity” to lobby for supply-side economic policy. CUAP recently hosted Scott Walker, who appears highly congenial to the committee’s agenda. The interesting thing about Kudlow’s continuing influence over conservative thought is that he has elevated flamboyant wrongness to a kind of performance art. He has argued continuously, since Bill Clinton raised taxes on the rich in 1993, that higher taxes on the rich must necessarily destroy economic growth, and that lower taxes on the rich must necessarily bring prosperity. As (perhaps owing largely to unfortunate coincidence) the exact opposite has happened instead, he has resorted to a series of frantic post-hoc revisions.

Today, in an interview with Jim Tankersley, Kudlow provides the updated version of his theory. Kudlow’s biggest problem is that the United States recently had a president who closely followed his economic prescriptions, and the result was a mediocre recovery with stagnant wages culminating in a worldwide economic meltdown. Does this in any way cut against Kudlow’s belief in the stimulative power of marginal tax cuts? No, no, Kudlow explains. According to Tankersley, “Kudlow blames President Obama and his GOP predecessor, George W. Bush, for expanding safety net programs and discouraging work.” Also, Kudlow “says Bush’s temporary and targeted 2001 and 2008 tax cuts failed, but that his big rate cuts in 2003 spurred a five-year ‘boom.’” So, to sum up, Bush’s supply-side tax cuts worked. But he also passed non-supply-side tax cuts (in 2001) that failed, and he spent too much.

Let us consider these arguments individually.

1. Did Bush’s 2001 tax cut fail to include supply-side incentives? No. It cut the top tax rate to 35 percent. At the time of their passage, Kudlow celebrated the 2001 Bush tax cuts as an important success:

The Bush plan is a crucial first step toward returning to the principle of supply-side tax policy that focuses on marginal tax-rate relief. As the incentive effects gradually kick in over the years ahead, economic growth will increase and inflation will decline. The dollar exchange rate will appreciate. Stock markets will recover.

2. Did Bush’s spending undermine the recovery? Funny, at the time, Kudlow was insisting the economy was undergoing a “Bush boom” that was massively underappreciated by everybody except himself and a handful of far-sighted supply-siders. As as disaster loomed, Kudlow insisted that the notion that the Bush boom might go into recession was a liberal hallucination.

3. Did Bush’s 2003 tax cuts create a “five-year boom”? Aside from the fact that the Bush recovery was one of the weakest of the postwar period, not a “boom,” there is the “five-year” problem. Why would the 2003 tax cuts get credit for everything that happened before 2008, but not after, since they continued through 2012?

Indeed, Kudlow continued to credit those tax cuts intermittently for whatever good economic news followed over the next four years. At the end of 2010, President Obama signed a two-year extension of the Bush tax cuts. A few months later, Kudlow was explaining that the Bush tax cuts had created more wonderful economic growth:

“So, did the big March jobs report put President Obama back on the road to reelection? Well, if so, guess who he has to thank — the GOP, whose tax cuts saved him from himself,” Kudlow said. “At this rate, nearly 2 million jobs are going to be created in 2011. So, the White House has got to be very happy. But here’s the sublime irony: The wake-up in job creation is a function of Republican policy. After all, for two years the Obama Democrats spent themselves into oblivion. Over trillion dollars of so-called big-government stimulus – it didn’t work. It was replaced, however by Republican tax cuts that the president signed only after a shellacking at the polls.”

Of course, the portion of those tax cuts benefiting only the richest 1 percent of taxpayers ended at the beginning of 2013. Since then, job growth has accelerated: 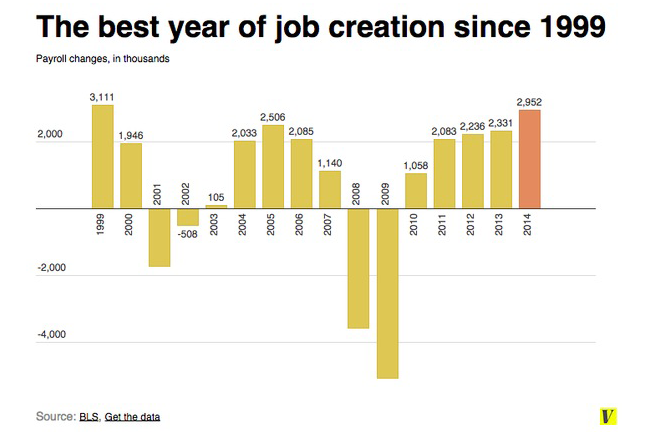 THE FEED
12:43 p.m.
early and often
early and often
The NYC Media Might Have Cost Democrats the House
By Eric Levitz
After New York outlets hyped rising crime, counties in the NYC media market voted more Republican than their immediate neighbors.
11:37 a.m.
world cup
world cup
The Five Most Dramatic Subplots Ahead of U.S.-Iran
By Benjamin Hart
As the geopolitical foes square off in Qatar, there’s a lot hanging in the balance.
8:00 a.m.
early and often
early and often
Joe Biden Is Realizing Trump’s ‘America First’ Vision
By Eric Levitz
The president is alienating allies and waging economic war on China to ensure America’s industrial supremacy.