In an interview yesterday with Vox, President Obama said something clumsy, inaccurate, and somewhat insensitive. In the course of defending his prerogative to use force against terrorism, he said, “my first job is to protect the American people. It is entirely legitimate for the American people to be deeply concerned when you’ve got a bunch of violent, vicious zealots who behead people or randomly shoot a bunch of folks in a deli in Paris.” The clumsy and inaccurate part of this is that the victims of the attack on the market in Paris were not selected at random. They were chosen because the killer believed a kosher market offered a good chance to kill Jews. The killer himself said at the time, “I have 16 hostages and I have killed four, and I targeted them because they were Jewish.”

In the wake of this sort of poorly constructed, off-the-cuff statement, government spokespeople always swoop in to do what flacks call “cleanup,” or reconciling the poorly chosen words with official government policy. Yet here is where a small bungle turned into a very large one. Both spokespeople — Jen Psaki of the State Department, and Josh Earnest of the White House — actually embraced Obama’s strange and incorrect statement rather than revise it.

So Obama Was Lying All Along About Gay Marriage. Is That Bad?
All This Talk of the Crusades Puts Bobby Jindal in a Crusading State of Mind
Paul Ryan Visited a Bookstore Once, So I Guess I Misjudged Him

Psaki, asked if Obama believed the attack on the kosher market was truly random rather than aimed at Jews, insisted, “There were not all victims of one background or one nationality.” (In fact, the victims at Hyper Cache were all Jewish.) Psaki continued to refuse to attribute anti-Semitic intent to the attacks. “I don’t think we’re going to speak on behalf of French authorities and what they believe was the situation.” (In fact, the French government has called the attack on the Hyper Cache market anti-Semitic.) 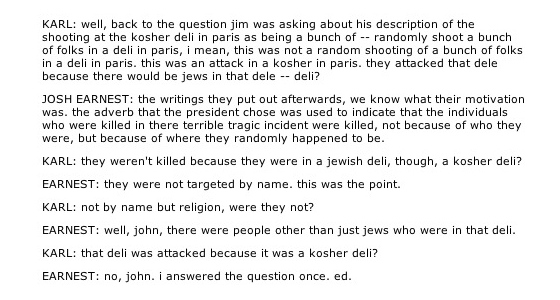 If Earnest and Psaki are to be taken at their word, the Obama administration is no longer willing to identify the attack on a kosher supermarket as anti-Semitic. Conceivably they have changed the administration’s position on the fly in order to avoid admitting that the president misspoke, turning a gaffe into an official line. More likely (following the general rule that one should not attribute to venality that which can be explained by incompetence) they both failed to anticipate the question and tried to bluff their way through with disastrous results.

The administration is already cleaning up its cleanup:

We have always been clear that the attack on the kosher grocery store was an anti-semitic attack that took the lives of innocent people.

Well, no, you haven’t. That’s the problem.

Our view has not changed. Terror attack at Paris Kosher market was motivated by anti-Semitism. POTUS didn't intend to suggest otherwise.