Yesterday, Jeb Bush commanded media attention in a highly public unveiling of his foreign-policy advisory team. The more significant development was Scott Walker’s semi-public confab with the leading lights, such as they are, of supply-side economics. Last night, the Wisconsin governor attended a dinner in New York hosted by Stephen Moore, Arthur Laffer, and Lawrence Kudlow. This is a strong indication of the policy leanings of a candidate who probably stands as strong a chance as anybody of capturing the nomination.

The backdrop to Walker’s meeting is that the Republican Party is undergoing the first serious effort to alter its domestic policy in a quarter century. In 1990, George H.W. Bush reluctantly agreed to a small tax hike on the rich in order to secure Democratic support for a major deficit-reduction plan. Conservatives revolted and opposed Bush’s deal en masse, and, since then, securing the lowest possible effective tax rates for the richest Americans has been the core tenet of party dogma. This overriding priority remained completely unchallenged within the GOP until the aftermath of the 2012 election, when some party strategists and intellectuals realized that its insistence on lower taxes for the highest earning one percent left Republicans handicapped in competing for the votes of the remaining 99 percent. The reformocons have proposed, in various ways, to move the party’s domestic focus toward more direct benefits for the middle class. Reformocon concepts have gained some attention from leading candidates like Jeb Bush, Marco Rubio, John Kasich, and, perhaps, Chris Christie.

Obamacare-Hater Can’t Find Single True Fact
Paul Ryan Visited a Bookstore Once, So I Guess I Misjudged Him
Sorry, Rand Paul, Ronald Reagan Did Not Give Us the Clinton Boom

This has left a gaping void for a Republican candidate to defend the party’s traditional (and still-reigning) dogma. Plenty of candidates can and will do that — Bobby Jindal, Ted Cruz, Rand Paul, Rick Perry — but Walker is the candidate with the strongest standing. A twice-elected blue state governor who smashed his state’s public employee unions, Walker has mainstream electoral plausibility. Walker is also an ideal candidate to carry the banner of traditional Republicanism, having been married on Ronald Reagan’s birthday, and celebrating the occasion annually with a meal of the Gipper’s favorite foods, like macaroni-and-cheese casserole and red, white, and blue jelly beans.

The supply-side ideology of Moore, Kudlow, and Laffer is a form of Reagan cultism. Supply-siders consider Reagan’s tax cuts a towering achievement, responsible for all the positive events (and none of the negative events) that have followed. They believe that cutting the top tax rate always ushers in massive prosperity, and that raising it dooms the economy to stagnation.

So, for instance, when Bill Clinton raised the top tax rate in 1993, Kudlow left absolutely no doubt that this would snuff out the recovery. “There is no question that President Clinton’s across-the-board tax increases … ” he insisted, “will throw a wet blanket over the recovery and depress the economy’s long-run potential to grow.” In fact, the economy boomed. When George W. Bush proposed tax cuts, which he claimed would still allow a margin for error for the government to continue the surpluses that emerged, Kudlow insisted the surpluses would be even bigger than Bush forecast. “Economist Lawrence Kudlow has been the nation’s most accurate fiscal prognosticator of the last decade,” explained Moore, “and he estimates tax surpluses will be twice as large as the official forecast.” In fact, revenues collapsed and never came in anywhere near as high as estimated.

Likewise, the teachings of supply-side economics assured Kudlow that the Bush Boom, whose bounties he touted relentlessly, would be sustained for years to come, insisting in the ominous fall of 2007: 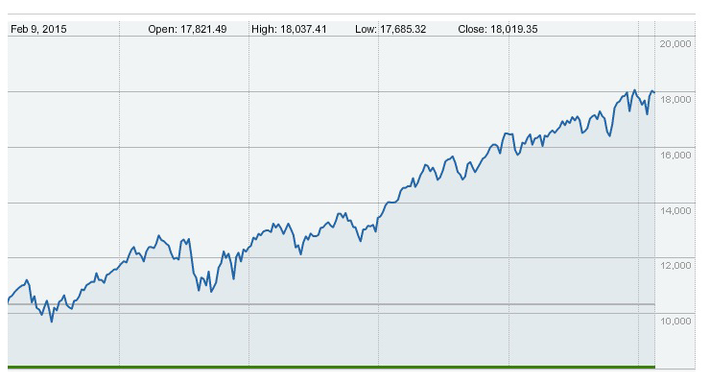 As for Moore — whom I happened to write about yesterday — well, he makes Kudlow look like a genius. His analysis is frequently based on extremely simple, grade-school-level errors. I’ve been writing about this since 1997. There is no other way of putting it: Moore is simply a buffoon.

Yet his brand of buffoonery is pervasive. When reformocon James Pethokoukis recently argued “The GOP Should Become the Party of Math,” the operating word was become — that Republican budget policy should follow mainstream economic assumptions or even arithmetic laws remains a subversive notion. The Republican anti-math wing is not going to surrender its control without a fight. And Scott Walker may be the candidate to wage it.