The Republican Party began the Obama era with a reflexive spasm of disgust against George W. Bush. The sins of the 43rd president, both real and imagined, propelled and helped to justify a wild lurch to the right. Was Bush a failed, unpopular president? This was only because he had sold out conservatism with his big-spending ways. Had Republicans turned against even policies they once supported — like TARP, fiscal stimulus, and cap and trade — in order to deny Obama any bipartisan cover? This was because those policies represented cardinal ideological error, of which the party had now cleansed itself.

The majority of the GOP now recognizes this lurch into anti-government purity was a mistake. The question is not whether the Republican party returns to Bushism, but whether its return is complete enough that this return can be led by George W. Bush’s actual brother.

Yes, George W. Bush Was a Terrible President, and No, He Wasn’t Smart
Paul Ryan’s Most Shameless Lie Ever
How Democrats Became the Child-Care Party

The return to Bushism is the inevitable outcome of a partywide reevaluation that is already under way. Some Republicans, like Paul Ryan, see the Republican error against Obama as mostly a failure of messaging, and now want to sell the old conservative wine in new bottles. They are talking a lot more about inequality, and a lot less about “the takers,” but they continue to support the same policy goals. On the other hand, some intellectuals associated with the party believe its policy direction amounted to a substantive error, and want it to abandon, or at least soften, its relentless drive to redistribute income to the richest one percent of Americans and instead focus on middle-class families.

Among conservative policy intellectuals, a sharp debate has broken out. The traditional supply-siders argue that the party’s top goal ought to be the reduction of the top tax rate, while reformicons insist that it should instead focus on tax credits for middle-class families whose wages have stagnated. The resolution to this debate is very easy to forecast: The eventual Republican candidate will simply do both — cut taxes up and down the income ladder.

The only reason Republicans can’t come out openly for a big, debt-financed tax cut right now is that they have invested heavily in an anti-deficit message during the Obama presidency. But the pattern of Republican politics since the 1970s is to inveigh against deficits during Democratic administrations, and then expand those deficits by cutting taxes when their own party regains power. As the deficit falls, Republicans have already begun de-emphasizing the deficit in their message. By the time a prospective Republican president takes office, it will be a dead issue for them.

One can see the outlines of this compromise emerging in Jeb Bush’s domestic-policy speech in Detroit. Bush framed his agenda as a new, opportunity-focused program to appeal to new, underprivileged constituencies. He did not renounce any aspect of traditional Republican doctrine. Jonathan Martin asked Bush, after his speech, how his proposals would differ from the usual fare, and Bush’s answer, or lack thereof, was revealing. “In a brief interview after his speech, he did not say whether his policy prescriptions would be tailored to help the neediest Americans or would more resemble conservatives’ traditional solution of cutting taxes across the board,” reports Martin. “He did not directly answer when asked if cutting marginal income tax and capital gains rates would help those in need.” There’s no reason to believe Jeb Bush would oppose the Republican holy grail policy of cutting taxes for the rich. He will simply de-emphasize it in favor of more popular ideas. 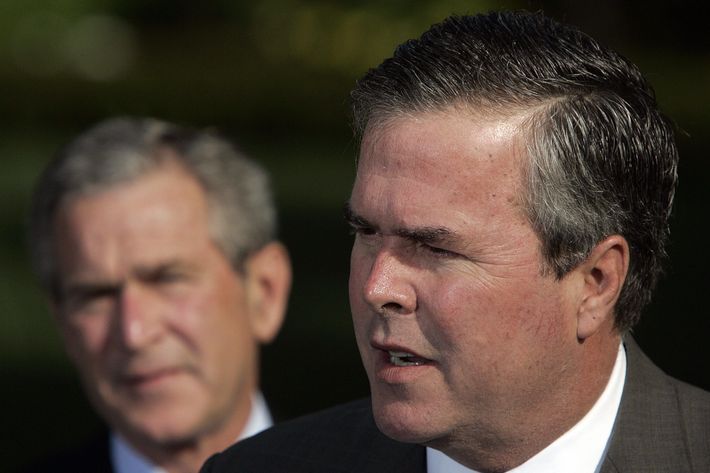 This was, of course, the plan that George W. Bush ran on in 2000. Bush framed his tax cut proposal as aimed primarily at “waitress moms,” who he claimed, falsely, would receive the greatest share of its benefits. But George W. did cut taxes for the middle class, along with taxes for the rich. Jeb Bush’s nascent message resembles that of his brother in other ways, too. Both advocate centrist education reform proposals that have the potential to gain support from moderate Democrats. Both advocate immigration reform. And both wrap their candidacies in the symbolism of racial inclusion — George W. seemed to be photographed with African-Americans everywhere he went.

This is not to say a Jeb Bush presidency would inevitably recapitulate his brother’s. Jeb brings clear and distinct advantages. He is obviously smarter — not merely in comparison to his simpleton brother, but possibly even in comparison to the average politician. His marriage has given him a genuinely multicultural perspective that the two prior presidents Bush have lacked. And he has won election in a vital swing state.

Yet alongside these advantages there sits an enormous liability: the Bush name. George W. Bush is much less unpopular today than when he left office, thanks to the general nostalgic gloss that lifts the reputations of all ex-presidents over time. Nonetheless, he is not exactly a popular figure. Polls of Bush’s favorability rating show that about as many Americans approve as disapprove — a poor showing for a figure more than six years removed from the partisan conflict. Bill Clinton’s favorable ratings are far loftier, at a ratio of about two-to-one.

This is important, because swing voters tend to have little information about politics, and the connection with a former president is likely to play a large heuristic role in their decision. A person who does not follow politics closely, asked to choose between a Clinton and a Bush, is likely to remember that the economy prospered under the first and stagnated under the second. The Bush name, among Americans as a whole, remains poor branding.

Amusingly, the Republican donor class sees it in just the opposite terms. A New York Times report from last year, describing the early movement of donors to get behind a Jeb Bush 2016 campaign, matter-of-factly notes that its sources largely see the Bush name as magic: “The family name, he said, remains a powerful draw. “They love the Bush family,” Mr. Wynn said. “They love the whole package, and they feel Jeb is just a part of the package.”

The question is whether the rest of the party is ready to go along. After having loaded all their failures onto George W. Bush’s back, and cut him adrift to save conservative ideology from the taint of his undeniable failure, can the Republicans attach themselves once again to another Bush?

8:00 a.m.
extremism
extremism
Georgia Now Grows Politicians to the Right of Marjorie Taylor Greene
By Ed Kilgore
One Republican congressional candidate is co-headlining the rally for the “political prisoners” of January 6. And he’s not the most extreme.
7:00 a.m.
the national interest
the national interest
No, the Richest One Percent Don’t Pay 40 Percent of the Taxes.
By Jonathan Chait
A misleading conservative talking point that refuses to die.
9/15/2021
space
space
SpaceX Launches First Ever All-Civilian Crew Into Orbit
By Matt Stieb
For the next three days, the tourists will live in a 13-foot-wide capsule 360 miles above the Earth.
9/15/2021
trump administration
trump administration
Did Gen. Mark Milley Actually Go Rogue at the End of the Trump Administration?
By Matt Stieb
Reporting on Robert Costas and Bob Woodward’s book suggests the journalists may have inflated the severity of a call from Milley to a Chinese general.
9/15/2021
catholicism
catholicism
Pope Francis Is Not a Fan of Conservative Effort to Deny Communion to Joe Biden
By Ed Kilgore
After some oblique warnings, Francis is clearly telling telling conservative bishops to behave like pastors, not politicians.
9/15/2021
congress
congress
Mitch McConnell Prefers Calamitous Debt Default to Helping Democrats
By Ed Kilgore
Democrats helped McConnell raise the debt limit during the last administration, but he insists Republicans aren’t going to return the favor.
9/15/2021
new york city
new york city
De Blasio Finally Acts As Deaths Pile Up at Rikers Island
By Matt Stieb
Ten inmates have died so far this year, many by suicide. Following de Blasio’s action, 20 correctional officers were suspended for going AWOL.
9/15/2021
the law
the law
What’s Next in the Legal Fight Against Texas’s Extreme Abortion Ban
By Irin Carmon
A brazenly political court let Texas ban almost all abortions. Politics may be the only thing to stop it.
9/15/2021
voting rights
voting rights
Surrendering to Republicans on Voting Rights Won’t Save Democracy
By Ed Kilgore
Joe Manchin seems to think voting-rights reforms have to be bipartisan to work. But letting Republicans run wild won’t encourage them to compromise.
9/15/2021
intelligencer chats
intelligencer chats
What Newsom’s Landslide Victory Says About National Politics
By Gabriel Debenedetti and Benjamin Hart
Among other things, voters are still taking COVID very seriously.
9/15/2021
politics
politics
California Governor Gavin Newsom Destroys Effort to Recall Him
By Ed Kilgore
Why it wasn’t even close.
9/15/2021
covid-19
covid-19
The Debate Over Booster Shots Is Getting Hotter
By Paola Rosa-Aquino
Should everyone get an extra shot, or just the most vulnerable? That question is splitting experts and even the Biden administration.
9/15/2021
explainer
explainer
What Is China Doing to the Uighurs in Xinjiang?
By Jonah Shepp
Beijing claims it’s merely fighting extremism. But it’s been accused of committing atrocities against the Muslim minority group, including genocide.
9/14/2021
justice for j6
justice for j6
Capitol Police Prepares for Potential Violence Ahead of September 18 Rally
By Matt Stieb
After failing to plan ahead in January, USCP brass is briefing officers before a rally supporting those arrested in the wake of the Capitol riot.
9/14/2021
media
media
Talking to New Yorker Archivist Erin Overbey About Her Byline-Diversity Project
By Choire Sicha
“I started in 2019 looking at our tables of contents. It really was a lengthy project. Once you get going, it’s kind of hard to stop.”
9/14/2021
politics
politics
The Vice-President Who Saved Democracy on January 6 Was … Dan Quayle?
By Ed Kilgore
Mike Pence has been hailed for resisting Trump’s calls to reject Biden votes. But a new book says the coup was thwarted by an even less likely hero.
9/14/2021
the national interest
the national interest
What If We Had a Class War and Nobody Noticed?
By Jonathan Chait
Biden’s Washington is a huge fight over whether trillions go to the rich or the working class.
9/14/2021
reconciliation bill
reconciliation bill
3 Key Divides in Democrats’ Civil War Over the Biden Agenda
By Eric Levitz
It’s not just progressives versus moderates.
9/14/2021
pivot
pivot
Apple’s Supposed Loss in Court Was Actually a Win
By Intelligencer Staff
The price Tim Cook & Co. will have to pay in their battle against Epic Games is just not very significant.
9/14/2021
covid-19
covid-19
No, COVID Vaccines Don’t Cause Swollen Testicles
By Chas Danner
Or impotence. Or infertility.
9/14/2021
filibuster reform
filibuster reform
How a Filibuster Reform for Voting Rights Could Happen
By Ed Kilgore
Joe Manchin and others Democrats could push voting rights reform through the Senate without killing the filibuster — if they want.
9/14/2021
games
games
Dave Zirin Thinks the Kaepernick Era Is Just Beginning
By Will Leitch
Talking with the veteran sports journalist about his new book, which examines how the activist quarterback transformed the sports landscape.