In an obvious attempt to persuade the Supreme Court that the latest Obamacare lawsuit would not sow massive disruption, three Republican Senators recently wrote an op-ed headlined, “We have a plan for fixing health care.” The text that follows is a refutation of the headline. It runs a mere 508 words, unusually short for an op-ed, and only a few sentences of which even purport to describe an actual plan. They “will give states the freedom and flexibility to create better, more competitive health insurance markets offering more options and different choices,” but they don’t say what those choices would be, or how any of it would be funded. Their plan would not be designed for the benefit of “the bureaucrats in Washington,” which is a shame for the bureaucrats. They go on to assure the justices or other readers, “Many of our colleagues have good ideas, and we look forward to working together,” which sounds like the opposite of a situation where you “have a plan.”

Can Hillary Clinton Manage a Presidential Campaign?
Obama Goes to Selma and Picks a Fight
Dan Pfeiffer’s Exit Interview: How the White House Learned to Be Liberal

The Republicans have had six years to develop an alternative to Obamacare. Before that, they had three previous presidential administrations (Reagan and both Bushes) since the conservative movement rose to power with which to develop a response to the decades-long American health-care crisis. They are no closer today than they were when the health-care debate began in Congress.

And the reason for the absence of a specific, partywide alternative is that Republicans don’t just have different goals than Democrats, they have different kinds of goals.

Obamacare was designed to reduce the physical, mental, and financial stress that comes with lacking access to health insurance, while also slowing down the long-term growth of medical costs. Those are specific, measurable goals. Republicans have insisted the law would fail to meet its objectives — costs would run higher than expected, workers would be forced into part-time jobs, the law would even fail to reduce the number of uninsured. None of those things have happened.

All the Republican predictions have failed. Just this week, the Congressional Budget Office once again revised down its cost projections for the law, which is now projected to cost 20 percent less than originally estimated. Given conservative certainty that the opposite would occur, you might expect some revision. But conservatives have not abandoned or even reduced their fervent opposition to Obamacare. This is because the right’s specific, measurable predictions about the law are subordinate to deeper, philosophical beliefs. They oppose the law’s methods (more taxes, spending, and regulation) on principle. They believe those methods will fail to achieve their stated goals, but even if they succeed, they oppose them anyway. Republicans cannot design a partywide health-care alternative because they cannot reconcile the specific things most Americans want from the health-care system (access to affordable insurance, protection from discrimination against preexisting conditions) with their ideological commitments.

This is not to say that the Democratic way of thinking about health care is right and the Republican way is wrong, though I personally agree with the former and not the latter. You don’t need to care that health-care reform “works” if you oppose it philosophically, and philosophical preferences are neither right nor wrong.

The asymmetry between the two parties is a longtime fascination of mine, and in recent years has drawn the attention of political scientists like Jacob Hacker and Paul Pierson, and analysts like Norman Ornstein and Thomas Mann. Political scientists Matt Grossmann and David Hopkins have written a new paper exploring the asymmetry in beliefs between the two parties. They find a great deal of data to support the case that Republican Party is simply more ideologically oriented than the Democrats.

1. It has been a truism of American politics for decades that American voters are symbolically conservative and operationally liberal: They favor small government in the abstract but they like most actual programs. As Grossmann and Hopkins point out, this allows both parties to see themselves as representing the majority. The rule also explains Obamacare — Republicans endlessly touting polling showing the law’s unpopularity, while Democrats respond that the law’s actual provisions are popular. 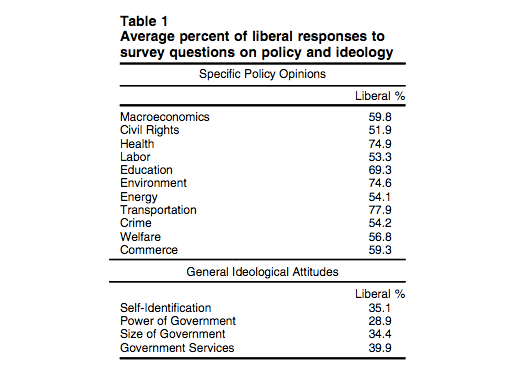 2. “For more than six decades,” they report, “the American National Election Studies (ANES) have asked a sample of Americans what they like and dislike about each major party and presidential candidate in every presidential election, recording their open-ended responses.” Republicans overwhelmingly describe their preference in ideological terms, Democrats in practical terms. This is true at the level of general voters: 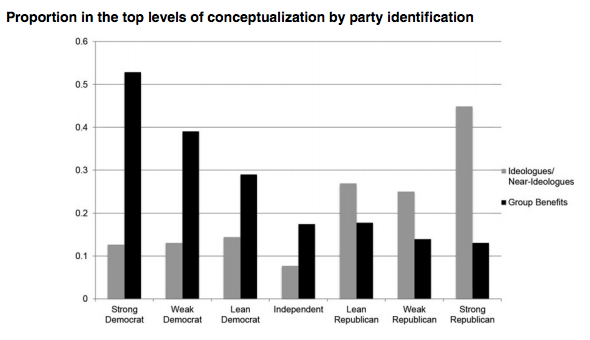 3. It also holds true among activists, among whom the Republican base is far more committed to conservative principle than the Democratic base is to liberal principle: 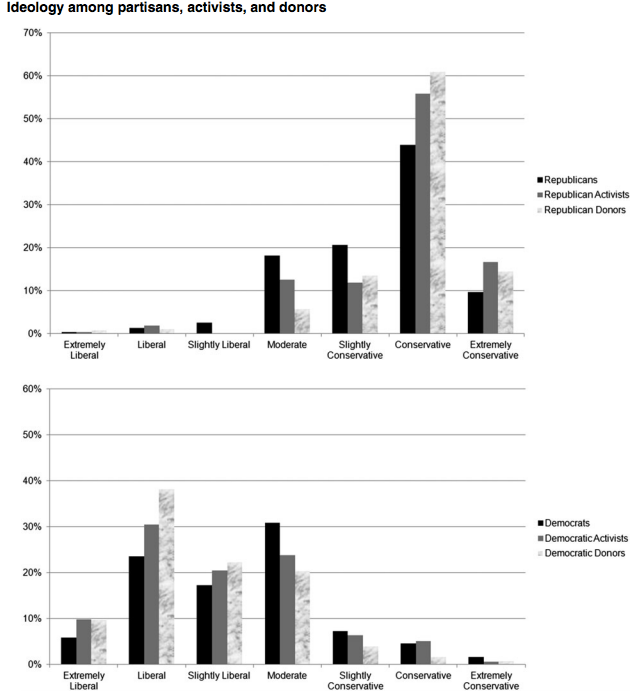 4. Democratic voters are also more committed to specific government programs than to the general idea of government. Republicans believe in cutting government in general but don’t want to cut many actual programs:

Republican consistency on broad ideological predispositions did not extend to specific policy questions, reflecting the enduring gap between symbolic and operational conservatism. For 81 percent of non-activist Democrats, the number of issue areas on which they supported an increase in spending exceeded the number of areas on which they supported spending cuts, but only 38 percent of non-activist Republicans identified more items to cut than items for which they favored spending growth. Democrats exhibit much stronger support for particular forms of government activity than for activist government as such, while Republicans are more united around broad principles of limited government than around the need for reductions in specific programs.

This, of course, explains why Republicans struggle so consistently to translate their principles into a concrete program: Even their own voters don’t support many real program cuts. This is why conservative Republican presidents have massively increased the deficit — they set tax levels to fund the government they would like in the abstract, while funding the level of government they want in the specific. 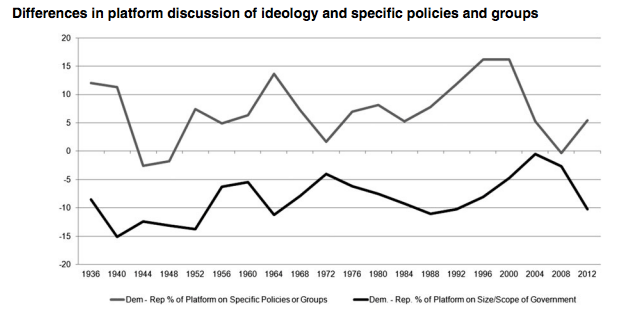 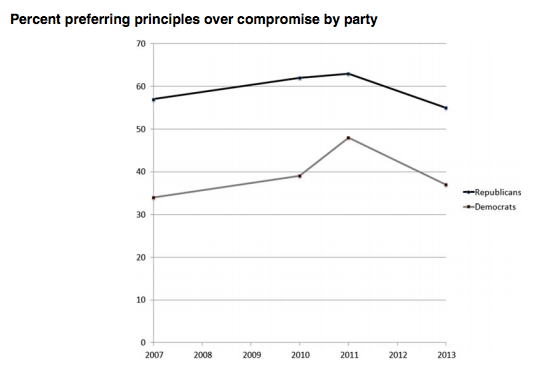 For Republicans to actually unify around a health-care plan would require them to oppose every tendency that defines their party. They would have to side with the specific programmatic desires favored by the voters rather than its abstract ideological goals. They would need to compromise with the opposing party rather than stick to principle. Republicans won’t have a real health-care plan until they become a different kind of party.