Every conservative knows that Obamacare is a bureaucratic train wreck that constitutes the greatest threat to freedom in American history by its sapping of our precious bodily fluids. But isn’t it true that, at the very least, this massive socialistic monstrosity is providing some people with health insurance? The Obama administration has a new report showing that the uninsured rate has dropped by 35 percent so far. The conservative Heritage Foundation isn’t buying it:

Critics say the report falls short because it is an extrapolation from Gallup surveys instead of being based on hard data. Edmund Haislmaier, senior fellow at the Heritage Foundation, a conservative research group, said the report also doesn’t include essential information on how many people who signed up on exchanges were previously uninsured.

Right, I mean, who can really say? Yes, there has been a sudden and extremely sharp plunge in the uninsured rates among the populations eligible for coverage under Obamacare that begins at the exact time Obamacare took effect: 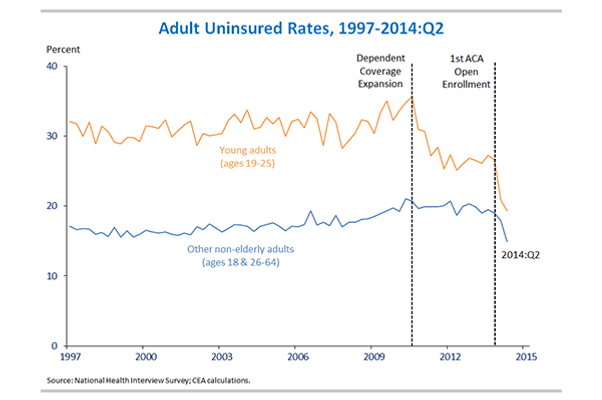 But that could be anything. Survey error. People being excited about Republicans winning the midterm. Sunspots. You never know. Probably not the sudden availability of a major new federal health-care law enrolling millions of people.