On Tuesday morning, Israeli Prime Minister Benjamin Netanyahu spoke to Congress for the third time, and Senator Lindsey Graham predicted that the event would almost be as great as a Garth Brooks concert.

Indeed, the speech lacked none of the pomp and circumstance of the State of the Union addresses that also take place in the House chamber — and unlike President Obama’s speeches, Senate Majority Leader Mitch McConnell was glowing with excitement at the prospect of hearing this one.

Here’s a quick recap of the speech, for everyone who doesn’t light up at the idea of long foreign-policy speeches or think that shaking hands is breaking news. 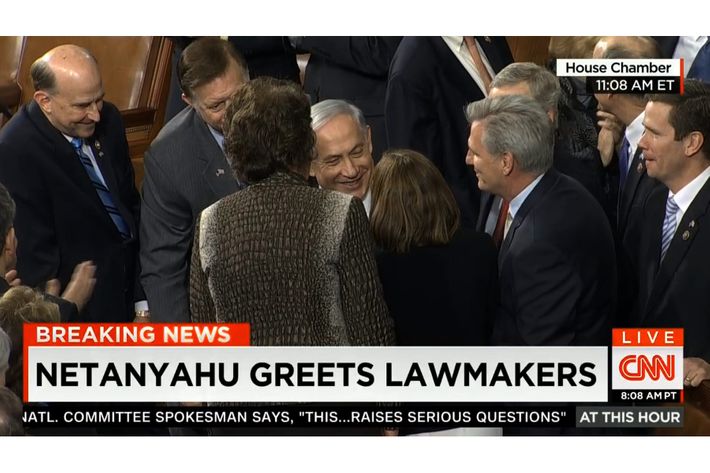 Since Speaker of the House John Boehner invited Netanyahu without asking the White House’s permission, the Obama administration and many Democratic leaders were not looking forward to this speech — especially since everyone knew that the Israeli prime minister was going to spend much of his allotted time at the Capitol blasting the ongoing nuclear negotiations between Iran and the United States.

Netanyahu began his speech by addressing these complaints — and trying to prevent the Democrats who were watching the speech from ruining his standing-ovation count.

“I deeply regret that some perceive my being here as political. That was never my intention,” he said. After listing the many ways the White House had helped him since 2009, he added: “I will always be grateful to President Obama for that support.” Democrats would clap to that, but most weren’t quite as enthused as Republicans about the rest of the speech.

Rep. Nancy Pelosi released a statement after the address saying she was I was near tears throughout the Prime Minister’s speech” and “saddened by the condescension toward our knowledge of the threat posed by Iran and our broader commitment to preventing nuclear proliferation.” She had already conveyed similar feelings on CNN during the speech.

Much of the rest of the address was devoted to denouncing the agreement that Netanyahu’s “longtime friend” Secretary of State John Kerry is hashing out this week in Switzerland, which gave Republicans plenty of chances to catch up in Washington’s athletic pursuit of choice, ideologically motivated hand-smashing.

“My friends, for over a year, we’ve been told that no deal is better than a bad deal. Well, this is a bad deal. It’s a very bad deal. We’re better off without it. Now we’re being told that the only alternative to this bad deal is war. That’s just not true. The alternative to this bad deal is a much better deal,” Netanyahu said in one of the lines that is surely going to be repeated the most in the upcoming weeks — and a reminder in campaign-ese that the prime minister’s constituents were watching the speech in Israel, deciding whether they want to vote for him in the March 17 Parliamentary elections.

Altogether, Netanyahu’s audience clapped 43 times during the speech. The prime minister acknowledged the presence of all those talking about his speech online and preparing to make GIF recaps by mentioning a “deadly game of thrones,” tweets, and the phrase, “You can Google it.”

Newt Gingrich didn’t even wait until the speech began to start clapping.

Senator Tom Cotton clapped and spoke Parsetongue, which apparently happens a lot during speeches in the House chamber.

Representative Paul Ryan especially loved the line, “So when it comes to Iran and ISIS, the enemy of your enemy is your enemy.”

Representative Ileana Ros-Lehtinen didn’t always clap, but that might have been because she was too mesmerized to do anything but listen.

Even Netanyahu couldn’t help but give his great speech a standing ovation.

… and for the moment when Netanyahu said, “But I can guarantee you this, the days when the Jewish people remained passive in the face of genocidal enemies, those days are over.”

Netanyahu ended his speech by telling Congress, “You’re wonderful,” which they had already agreed with after giving him a standing ovation when he called them “the most important legislative body in the world.”

Just before signing off and saying “God bless the United States of America,” Netanyahu reminded the legislators that Moses had been staring at them the whole time.

+Comments Leave a Comment
What You Missed in Netanyahu’s Speech

THE FEED
14 mins ago
what we know
what we know
Salman Rushdie Is on the ‘Road to Recovery’ Following Gruesome Attack
By Chas Danner and Victoria Bekiempis
The acclaimed author was grievously wounded and remains hospitalized, but was taken off a ventilator and again able to speak on Saturday.
1:58 p.m.
u.s. capitol
u.s. capitol
Man Dies by Suicide After Driving Car Into Barricade Near U.S. Capitol
By Chas Danner
The man drove into a barricade and fired a gun in the air, but police don’t seem to believe he was targeting any members of Congress.
8/13/2022
the city politic
the city politic
New York Times Sticks It to Progressives in New York’s Democratic Primary
By Ross Barkan
The editorial board’s backing of Dan Goldman, Jerry Nadler, and Sean Patrick Maloney for Congress also shows a disdain for identity politics.