President Obama’s approval ratings are hovering a few points below 50 percent, and his party is seeking a third straight term in the White House. Most analysts see this as a toss-up scenario. I see it as a highly favorable situation for the Democrats that would require a major event, like an economic downturn, to change. What accounts for the difference? At the bottom, it is about whether American presidential politics are following the same basic rules they have for decades, or whether the game has changed. I believe the game has changed, and the thing that’s changed is polarization.

The logic that predicts a toss-up election is rooted in the perfectly sound assumption that the historical models give us the best guide to the future. A third straight term from a party whose president has middling approval ratings sits right on the probability fault line, historically. As Nate Silver writes, “these cases default to being toss-ups.”

The trouble is that almost all those cases are drawn from a historic period that is very different from the current one. During the 20th century, the two parties were extremely heterogeneous. The Republican Party had a moderate wing that dominated its presidential elections for most of the postwar years until Ronald Reagan. Democrats had a powerful southern conservative wing. In that environment, the old folk wisdom, “Vote the man, not the party,” made a great deal of sense. In that environment, large chunks of the electorate swung easily from one party to the other depending on transient factors, like the current state of peace and prosperity, rather than deeper values.

The splitting of American politics into two coherent ideological parties with very little programmatic overlap changes things. Voters who are fundamentally attached to one party or the other are not going to abandon their team merely because their party has held onto office for too many terms, or because the other party’s president is presiding over a nice recovery. Those factors are not meaningless because some swing voters do still exist. And performance can change voter perceptions to a degree; a deep recession might make some Democrats doubt their party’s economic program. But these temporal effects are muted.

Emory political scientists Alan Abramowitz and Steven Webster have a new paper, not yet available online, exploring the nature of the new polarization. The paper is filled with interesting findings, but the major one is an attempt to resolve a paradox. Measured by self-identification, partisanship is actually declining — growing numbers of Americans describe themselves as “independent” rather than loyal to one of the parties. But measured by actual voting behavior, the opposite is happening: Straight ticket voting continues to grow. This matches what operatives like Dan Pfeiffer have seen, and what Karl Rove saw a decade before — the swing voter had nearly vanished.

One common explanation is that it has become increasingly vogue, especially among college-educated voters, to describe yourself as independent, which implies that you form educated judgments about politics rather than blindly following the dictates of a party. Abramowitz and Webster add to this by introducing a phenomenon they call negative partisanship. That is to say, voters form strong loyalties based more on loathing for the opposing party than on the old kind of tribal loyalty (“My daddy was a Democrat, his daddy was a Democrat …”) that used to prevail. The party system has split along racial, cultural, and religious lines, creating a kind of tribal system where each party’s supports regard the other side with incomprehension and loathing. 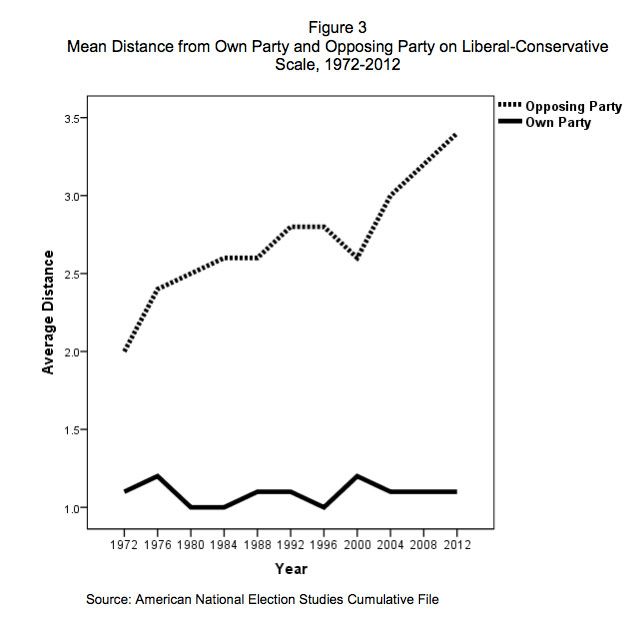 Correspondingly, the proportion of voters who believe there are important differences between the two parties has soared: 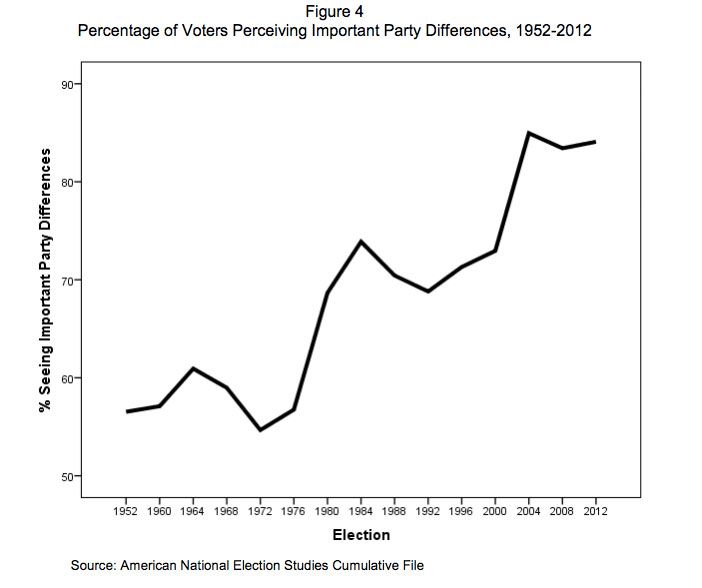 Measuring how this new, negative partisanship has changed presidential politics is hard because only a handful of presidential elections have taken place in the polarized era. It’s easier to measure the impact at the Congressional level, though, since the data set is much larger. And the impact is absolutely transformative. As split ticket voting has disappeared, House races have become almost perfect reflections of their districts’ presidential votes. As Abramowitz and Webster write, “the correlation between the Democratic share of the House vote and the Democratic share of the presidential vote in districts with contested races averaged .54 between 1972 and 1980, .65 between 1982 and 1990, .78 between 1992 and 2000, .83 between 2002 and 2010 and .94 in 2012-2014.” 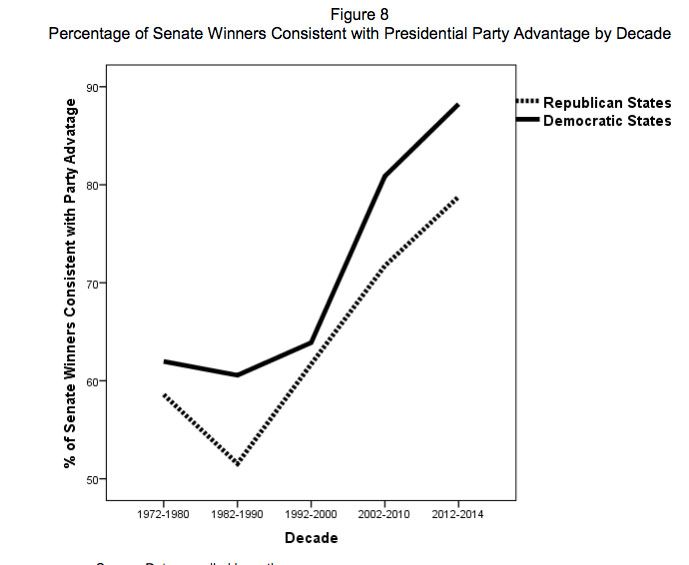 People used to vote for Congress based largely on personal qualities. (Good ol’ Senator Jones once shook my hand at the county fair, and he got that bridge built.) Those things still matter a little, but they matter much less. Now these races come down almost entirely to party. This is why, for instance, Mitch McConnell won reelection easily despite the fact that he was deeply unpopular. However much they loathe him, Kentucky’s voters detest the national Democratic Party too much to send one of its members to the Senate. Polarization has made voting in Congress a very different thing than it used to be.

Abramowitz and Webster don’t extend their analysis to presidential forecasting. But their notion of negative partisanship would certainly explain how the Democrats might hold a relatively solid advantage in presidential elections despite relatively modest approval ratings. Obama’s approval rating now is just about the same point it was in the summer of 2012. His approval did rise by a couple points in the final weeks of the campaign. (Likewise, George W. Bush’s approval did the same in 2004.) The theory of negative partisanship might imply that an election forced the president’s disappointed partisans to take a side, and that having a president with an approval rating in the high 40s is a much stronger position today than it was several decades ago.

It also suggests that the electorate is much less fluid than it used to be, and is more easily understood as hardened blocs defined by shared cultural identity (or shared mutual cultural antipathy). To be sure, as noted before, it is possible for the Democratic bloc to shrink and the Republican bloc to grow. Analysts like John Judis have suggested that this is happening — that white voters are moving toward the GOP. (Andrew Prokop endorses Judis’s argument that Democrats’ “support among working- and middle-class white voters may be declining more quickly than its support among racial minorities is growing.”)

But the polling evidence suggests this is not the case. White support for the Democrats did drop slightly from 2008 to 2012 — accounting for Obama’s narrower margin of victory — but it did not drop from 2012 to 2014. What changed from 2012 to 2014 was which parts of the electorate showed up to vote, not the electorate’s underlying loyalties. This chart via Pew Research shows that political views have held constant during Obama’s second term: 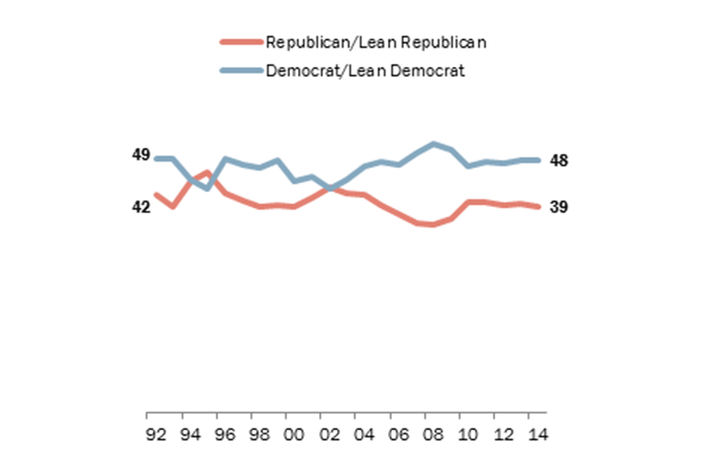 In this trench-warfare atmosphere, the fact that the bloc of voters loyal to the Democrats is growing steadily would seem to loom large. It is surely true that eventually, the alignment of the two parties will change, either because the Republicans move to the center or the Democrats move away from it. It is also probably true that the Democratic advantage is narrow enough that a major short-term event, like a recession or a huge scandal, could disrupt it. But the understandable reliance on the models of the past, and the assumption that nothing ever changes, may be missing the fact that something very important has.