My Week in New York: A Saturday newsletter from the Editors.
Sign Up
|
Snapcash is Snapchat’s money-transfer venture. (No, your cash does not immediately vanish.)

If social media is all about what’s happening in the world right now, then Product Hunt is a platform that shows us what’s coming next. One glance at the site’s homepage gives a glimpse into Silicon Valley’s id — 3-D-printed jewelry, smart kitchen devices, and a Drake-only version of Google. Launched as a newsletter in 2014 by a former product manager named Ryan Hoover, the Reddit-style forum is simply a list of products submitted by the companies’ founders and then ranked by users’ votes. But it’s quickly become a dynamic, influential community devoted to figuring out just which tech gadgets and services we’ll all be lusting after next.

Last year, Product Hunt featured more than 11,000 items, ranging from Instagram’s Hyperlapse to Hive, a free, unlimited cloud-storage service — and 23 million unique visitors showed up to gawk at them. The site strikes such a chord in part because obsessing about tech products has become more mainstream as the churn and growth of the tech industry have made it harder to parse what’s going on. Before he created Product Hunt, Hoover says, “I didn’t know of an online destination for this discovery and discussion.” A CliffsNotes version of the market itself, the site provides an instant sense of being as in-the-know as any venture capitalist.

Unlike gadget sites driven by editors and ads, Product Hunt is all about the engagement of its users, who are often entrepreneurs themselves. The site is particularly beneficial for founders, who effectively receive free feedback and market-testing. Popularity on the platform means potential high demand, and insider comments often provide insight. “What we’re trying to do is help enable makers that build something people want,” says Hoover.

Take Meerkat, for example, the live-streaming video app that piggybacks off Twitter to allow users to become their own broadcasters. Early approval from Product Hunt’s expert community drove attention to the company, which has gone viral in recent weeks; Madonna even used it to debut a music video. Recently, HBO Now has climbed high on Product Hunt’s list; an app for collecting cocktail recipes and a video-sharing platform are popular as well. But that’s just what happened to be up. We asked Hoover to pick out seven products that have made it to the top of the list by inspiring the most up-votes on Product Hunt — a hint at what might be the must-have technology of tomorrow. 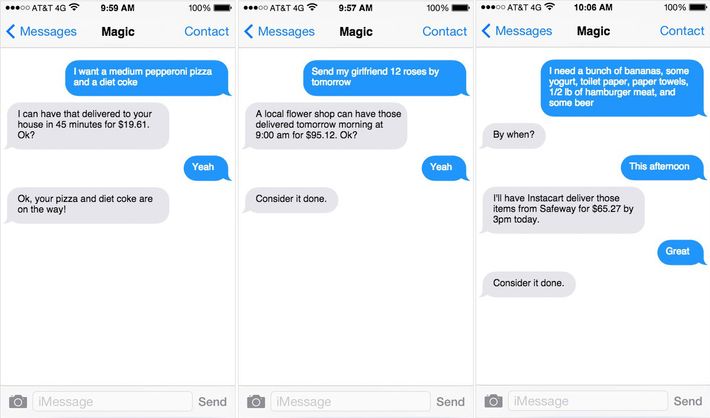 Magic is an aggregator of other services, an Uber for Ubers: Send a regular text message to the phone number 83489 with literally any request, and the company will do its best to serve your needs immediately, following up via on-demand platforms like Uber, Homejoy, and Mechanical Turk. “Magic is one example of many on-demand virtual-assistant services that use a combination of humans and machines to perform micro-tasks,” Hoover says. This company, however, takes the choosing out of the equation by figuring literally everything out for you. Of course, this trick is hard to pull off successfully. It’s “a bold claim that has yet to be proven as a scaleable business model,” he adds. 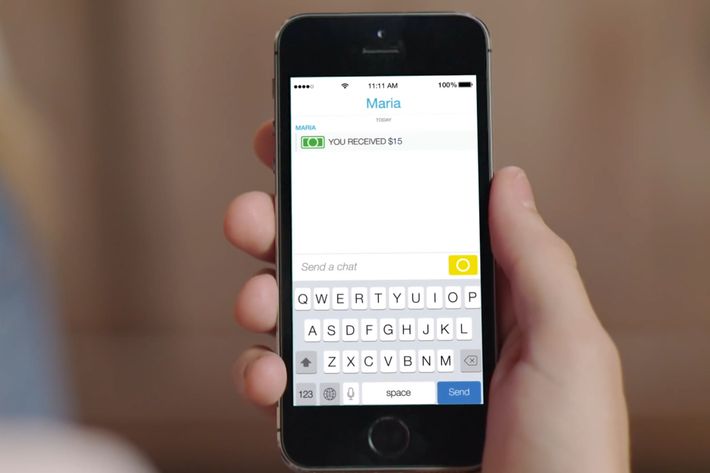 Square, Facebook, and Google are all betting big on digital money transfers, and now Snapchat’s in the game, too. Unique among payment apps, Snapcash leverages its access to one of the largest preexisting user bases in the world, around 200 million active users every month exchanging ephemeral images. That means the app doesn’t have to sell itself just as a wallet replacement, since it’s already close to their hearts (and pockets). “This becomes particularly interesting as it relates to the future of media and monetization for content creators,” Hoover says. Plenty of platforms have tried to enable writers, video broadcasters, and other independent creators to generate revenue online through microtransactions, he points out. But that model rarely works outside niche interests, like gaming. Given Snapchat’s huge popularity and burgeoning community of creative talent, you might just soon find yourself paying for Snaps from creators. 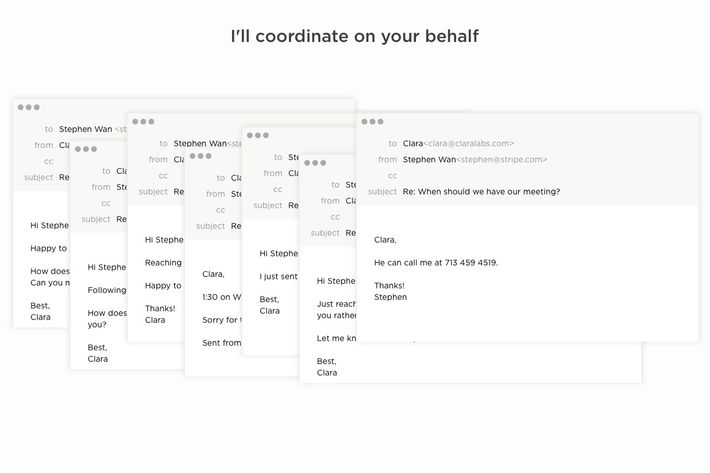 Clara is a robot that books your meetings for you — handling all that messy back-and-forth of finding openings and rescheduling cancellations. “It replaces much of the work of an executive assistant, increasing productivity and reducing possible head count,” Hoover says. 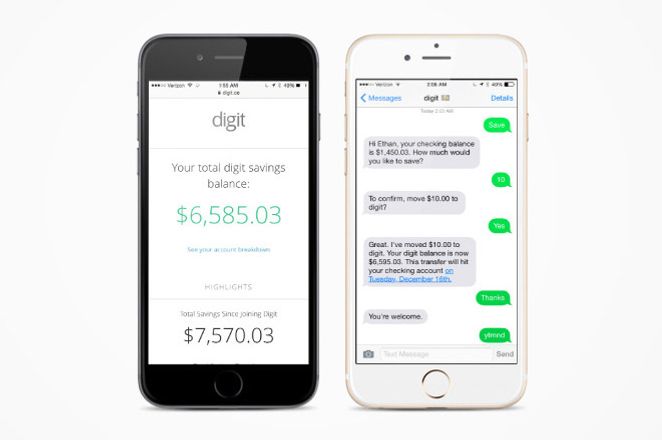 Consumer banking as we know it is breaking apart, and many people are saying good riddance—transfers are hard to do, and managing your own money is far from transparent. Digit is one of a group of apps intended to augment your accounting practices. It’s an “invisible app that automatically transfers money between your savings and checking account to save you money,” Hoover says. After you set your spending priorities, the app takes away the need to think about how much or when to save — it just happens automatically. 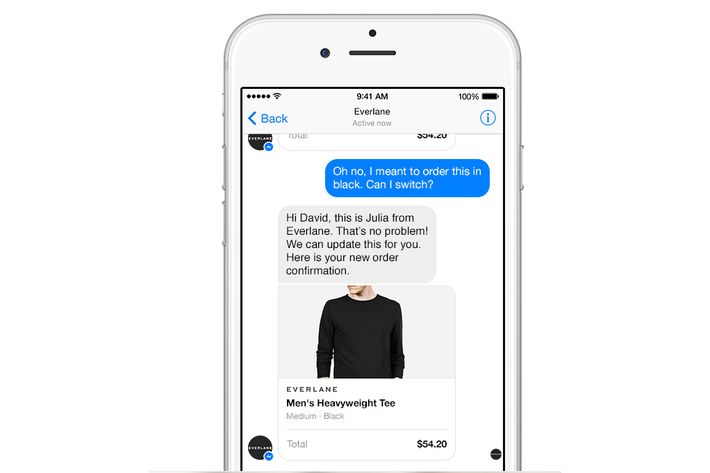 “There has been relatively little innovation in consumer-to-business communications,” Hoover says. Even though most of us barely phone our friends these days, we’re still stuck calling a local salon to schedule an appointment. Facebook’s Business for Messenger builds a familiar-looking digital link — just like Facebook’s own chat function, driven by a devoted app — between businesses and their clients. 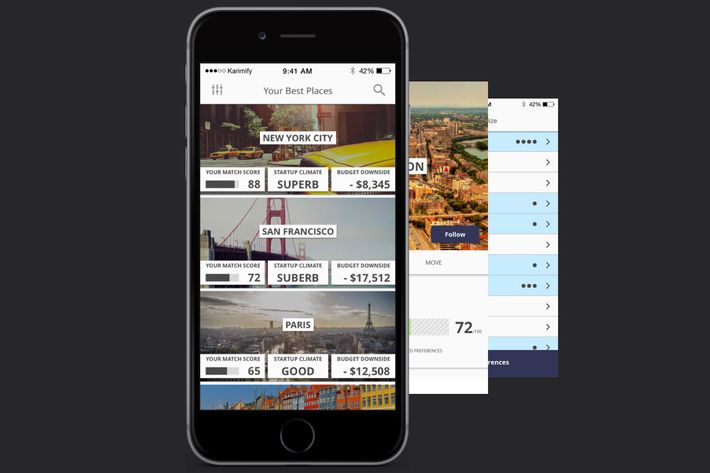 Given that many entrepreneurs and technology employees can work from anywhere, they may want to choose a place to live based on the needs of the business itself. Teleport, “an app for digital nomads and those evaluating where to live,” Hoover says, is kind of like a Tinder for cities. Select your criteria — how friendly a place is to start-ups, how urban, how expensive — and Teleport’s concierges will help you find the best spot for your business of one. 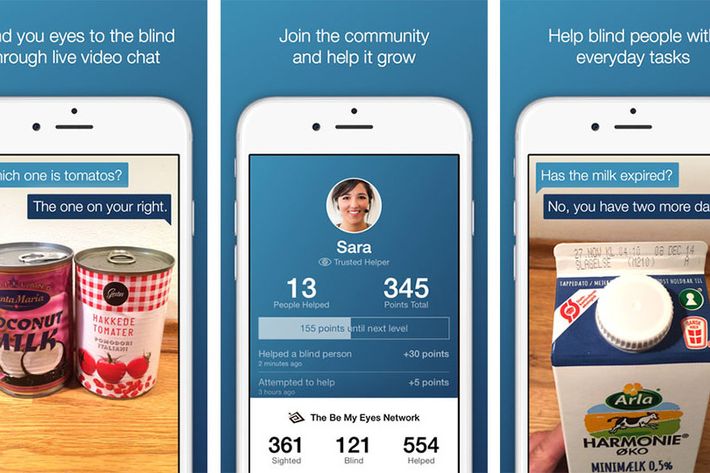 Be My Eyes, which Hoover says was one of the most up-voted products on Product Hunt when it launched, pairs a blind person with a sighted person via smartphone. With the help of the phone’s camera, the sighted person then helps the user see in real time. “This is a fascinating example of how technology can be used to connect people and build empathy among strangers,” Hoover says. Be My Eyes has already helped over 66,000 blind people, according to the service’s website, and attracted over 190,000 volunteers.

Be My Eyes might not be the most universally applicable app found on Product Hunt, but it is one of the most innovative, demonstrating a new way we might interact with technology with the goal of becoming better people, not just more distracted ones. That’s also the advantage of Product Hunt itself. Under Hoover’s care, it’s just highlighting the next great gadgets, but leading the way for us users to rethink our relationship with technology itself. It’s a reminder that the future is already being made — today.

THE FEED
15 mins ago
politics
politics
The Most Powerful Weapon for Police Reform Is Back
By James D. Walsh
Biden’s Justice Department takes out a tool shelved by Trump to force local law enforcement to change.
4:29 p.m.
the national interest
the national interest
Steve Scalise’s Ignorant, Racist Case Against D.C. Statehood
By Jonathan Chait
Republican from murderous, corrupt state says D.C. has too much crime and corruption to be a state.
4:01 p.m.
coronavirus vaccine
coronavirus vaccine
How to Sign Up for a COVID Vaccine in New York
By Matt Stieb
All New Yorkers over the age of 16 are now eligible to sign up for a shot.

2:57 p.m.
power
power
Manhattan Drops Prosecution of Consensual Sex Work
By Claire Lampen
The DA will still pursue charges for visiting sex workers and for sex trafficking.
1:48 p.m.
immigration
immigration
Reconciliation May Not Solve Democrats’ Immigration Woes
By Ed Kilgore
As with the $15 minimum wage, a path to citizenship could succumb to a Senate parliamentarian’s ruling. And then there’s Joe Manchin.
12:47 p.m.
politics
politics
Justice Department Launches Probe of Minneapolis Police Practices
By Nia Prater
Merrick Garland announced a probe into whether the department has engaged in a pattern of “unlawful policing” a day after the Derek Chauvin verdict.
12:01 p.m.
the national interest
the national interest
Why Should Black Protesters Trust a Senate That Underrepresents Them?
By Jonathan Chait
Peaceful police reform means taking democratic reform seriously.
11:22 a.m.

Perhaps the future of the increasingly Trumpy GOP is … a guy Trump soundly beat in 2016?

… Christie, whose 2016 bid for the nomination was short-lived, has told friends that he’d be the only person in the 2024 field with executive experience who has run a presidential race before.

That’s a clear shot at one potential rival, Florida Gov. Ron DeSantis, who’s enjoying a surge of popularity from Republican voters for his handling of COVID-19 and his sparring with the media but hasn’t yet endured the scrutiny of a presidential bid.

Christie could run on a reputation for toughness that appeals to Trump’s base minus the former president’s recklessness, said one source. Another said he has a mix of combativeness and charisma that Republicans are looking for to take on President Biden and Democrats.

Derek Chauvin has been found guilty on all counts

The jury has reached a verdict in the Chauvin trial

BREAKING: Jurors in the Derek Chauvin trial have reached a verdict and it will be read between 3:30 & 4CT today.

We will not know what the verdict is until then.

Things may be looking stable in America, but not so much worldwide

WHO: More than 5 million coronavirus cases were reported worldwide last week, the most in a single week so far.
—@ryanstruyk
4/20/2021

Spare a thought for the forgotten victim of the Trump presidency: Trump himself

I miss the most, helping people. That’s why I did it. Look, this has been very traumatic. I had a great life, great company, great business, no problems and now all I do is, people go after you. It’s vicious, it’s horrible but you know what? I loved doing it because I helped people. And I’ve helped them more than any president.

—Former President Donald Trump, during a Monday night appearance on Hannity
4/20/2021
games
games
Why Everyone Is Enraged About the European Super League
By Will Leitch
Europe’s top soccer teams are forming an exclusive new league just for themselves — and even their biggest fans are now in open revolt.
4/20/2021
covid-19
covid-19
Shots in Little Arms: When Can Kids Get the Vaccine?
By Paola Rosa-Aquino
All adults are finally eligible, but that’s not enough, according to experts.
4/19/2021
derek chauvin trial
derek chauvin trial
Chauvin Judge: Waters’s Comments Could Result in ‘Overturned’ Verdict on Appeal
By Matt Stieb
The judge said Maxine Waters’s statement that protesters must be “confrontational” could result in an overturned guilty verdict “down the road.”
4/19/2021

BREAKING: Walter Mondale has died at 93.

He transformed the role of U.S. vice president while serving under Jimmy Carter and was the Democratic nominee for president in 1984. https://t.co/oR0FIxFRAq
—@axios
4/19/2021
joe biden
joe biden
If Biden Walks Away in 2024, He’ll Make History
By Ed Kilgore
With the arguable exception of Calvin Coolidge, past presidents who didn’t run for a second term were following a one-term pledge or ran and lost.