A few years ago, there was a tremendous amount of hand-wringing about teenagers abandoning Facebook, dumping the ancient, ugly social network for its younger, sleeker, smartphone-native peers.

A new study from the Pew Research Center should help to counter that false impression — or at least to complicate it. Facebook remains the dominant social network in the United States, including for the kids. But the study provides a lot of nuance about who uses what social networks and how often they use them. 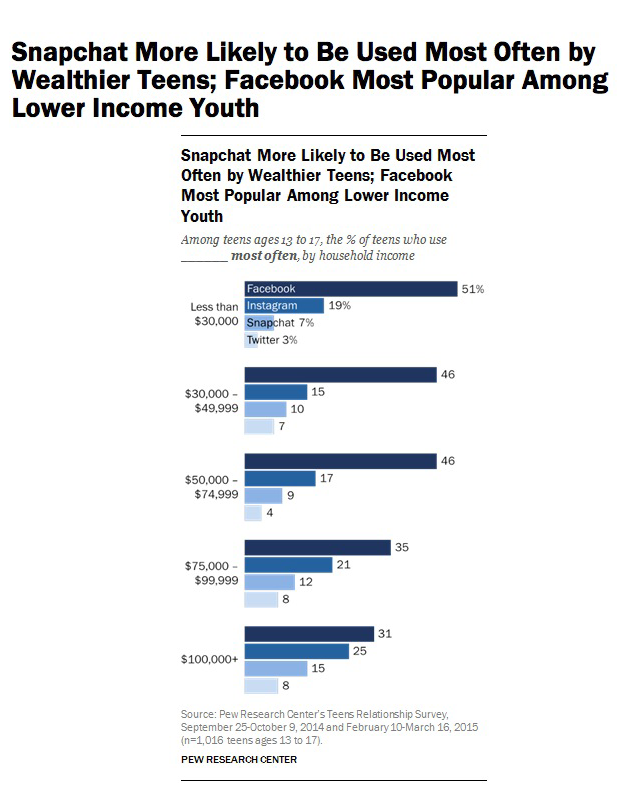 Stepping back, the study confirms that all teenagers are using the internet all the damn time. About nine in ten teenagers go online daily, with 24 percent saying they are online “almost constantly” and only 2 percent saying they go online less often than once a week. Much of that internet use is facilitated by smartphones, which three quarters of teens have or have access to, including 81 percent of black teens, who are online more frequently than their white and Hispanic peers.

Once they’re wired, teens are most likely to sign on to Facebook. But teenagers are diversifying their use of social networks, with seven in ten saying they use more than one site. And six in ten teens say that they most often use a platform other than Facebook, such as Instagram, Twitter, Snapchat, Tumblr, or Vine. “Facebook remains a dominant force in teens’ social media ecosystems,” the study concludes. But it’s not the dominant force.

Moreover, certain groups of teens are heavier users of Facebook — among them, kids from low-income families, boys, and older teens. Indeed, there are pretty stark differences in teenagers’ use of social media depending on income. More than half of poor teens use Facebook as their primary social network. Just 31 percent of high-income teens do. They’re much more likely to be Rich Kids of Instagram, or big users of Snapchat or Twitter.

But I can’t imagine that bothers Facebook too much. Its dominance remains secure. And it owns Instagram, after all.

THE FEED
11 mins ago
tremendous content
tremendous content
Don Jr. Is Ready to Laugh About the ‘Trump Baby’ Balloon
By Margaret Hartmann
While the Chinese spy balloon is no more, its cranky little brother is getting pampered by the Museum of London, giving Trump’s son a chuckle.
11 mins ago
what we know
what we know
Horrifying Footage Continues to Emerge From Turkey and Syria: Updates
By Chas Danner
The powerful earthquakes have flattened thousands of buildings in the region, and the death toll continues to mount.
2:47 p.m.
substation attacks
substation attacks
A Pair of Nazis Allegedly Wanted to Blow Up the Baltimore Grid
By Matt Stieb
The alleged plot is part of a surge in far-right extremists looking to take out the electrical grid.

1:28 p.m.
ftx fallout
ftx fallout
FTX Even Had a Woo-Woo Life Coach
By Matt Stieb
Sam Bankman-Fried hired his own psychiatrist to coach staffers about “happiness” and to encourage them to go on dates.
10:12 a.m.
the talented mr. santos
the talented mr. santos
Here’s Every Single Lie Told by George Santos
By Matt Stieb
Navigating the many exaggerations and falsehoods of New York’s newest representative.
10:00 a.m.
the national interest
the national interest
Michael Lind, Case Study in the Perils of Discourse-Poisoning
By Jonathan Chait
How an intellectual talks himself into believing the GOP is the left-wing party.
9:03 a.m.
what we know
what we know
Did China’s Alleged Spy Balloon Mission Backfire? Updates
By Chas Danner
It’s possible the whole saga will end up being a U.S. intelligence win.
9:00 a.m.
just asking questions
just asking questions
Should a 13-Year-Old Have Bariatric Surgery?
By Benjamin Hart
Sandra Hassink on what the new pediatric obesity guidelines she co-wrote do and don’t say.
8:00 a.m.
the economy
the economy
America’s Labor Shortages Are Good, Actually
By Eric Levitz
The upside of longer lines and faltering customer service.
2/5/2023
early and often
early and often
Has Pete Buttigieg’s Dream Job Turned Into a Nightmare?
By Ed Kilgore
It turns out Transportation secretary won’t be a quick and easy layover on the way to higher office for Mayor Pete.
2/4/2023
early and often
early and often
The Democrat Who Could Take Down Kyrsten Sinema
By Ben Jacobs
Ruben Gallego will try to fulfill the left’s dreams by challenging Arizona’s newly independent U.S. senator.
2/3/2023
early and often
early and often
House Republicans’ Assault-Weapon Pins Aren’t Just a Taunt
By Ed Kilgore
Owning the libs may be an added bonus, but Second Amendment absolutists clearly intend them as a threat against those who challenge gun rights.
2/3/2023
creature capers
creature capers
The Hunt Is on to Find the Dallas Zoo Bandit
By Matt Stieb
A suspect was arrested after police received a tip that the alleged bandit was visiting the aquarium.
2/3/2023
just asking questions
just asking questions
What Could a Chinese Spy Balloon Over the U.S. Do, Exactly?
By Matt Stieb
Arms-control expert Jeffrey Lewis examines whether the Chinese spy ship over the West is an accident or a geopolitical middle finger.
2/3/2023
poll position
poll position
Trump’s Lead in 2024 Polls May Be Thinner Than We Thought
By Ed Kilgore
The ex-president looks weaker against Ron DeSantis and other likely Republican rivals in the polls that were most reliable last year.
2/3/2023
tremendous content
tremendous content
Trump Knows How to End Ukraine War ‘Immediately,’ But It’s a Secret
By Margaret Hartmann
Trump revealed there’s something he could say that would “guarantee” that the fighting ends now. Sadly, he won’t tell unless we reelect him.
2/3/2023
horrible bosses
horrible bosses
Working for George Santos Is As Crazy As It Sounds
By Matt Stieb
A former aide recorded his conversation with the congressman as he was getting fired. Santos wasn’t all that nice about it.
2/3/2023
crime
crime
New Jersey Councilwoman Shot and Killed Outside Her Home
By Nia Prater
Eunice Dwumfour, a 30-year-old member of the Sayreville Borough Council, was found shot dead on Wednesday night.
2/3/2023
the economy
the economy
The Fed Can Stop Choking the Economy Now
By Eric Levitz
The statistical and moral case for easing up on the interest-rate hikes.
2/3/2023
2024 presidential election
2024 presidential election
What on Earth Are These 2024 Long Shots Thinking?
By Ed Kilgore
It’s not inconceivable that someone like Nikki Haley could become a contender. But don’t count out sheer ego as motivation.
2/3/2023
just asking questions
just asking questions
What It Takes to Give Abortion Seekers (Actually Good) Advice Online
By Irin Carmon
The Online Abortion Resource Squad’s Ariella Messing on fighting disinformation in a post-Roe world.
2/2/2023
early and often
early and often
Trump Reminds Republicans He’s Willing to Ditch the GOP
By Ed Kilgore
Even if he doesn’t formally launch a third-party bid, Trump could doom the 2024 Republican presidential nominee.
2/2/2023
royals
royals
Australia Banishes King Charles From Its Banknotes
By Margaret Hartmann
In the battle to succeed his mother on Australian $5 bills, Charles loses to the First Australians.
2/2/2023
early and often
early and often
The Hunter Biden Counteroffensive Begins
By Matt Stieb
Tired of being a GOP punching bag, he threatened Fox News with a defamation suit and encouraged the DOJ to investigate how his laptop became public.
2/2/2023
the national interest
the national interest
The GOP Attack on Ilhan Omar Trivializes Antisemitism
By Jonathan Chait
Elevating Marjorie Taylor Greene exposes the hypocrisy.