Karl Rove tries to remember what happened from 2001 to 2008, but only flashes of light and horrible pain follow. Photo: Brooks Kraft/Corbis

Karl Rove is a Wall Street Journal opinion columnist, Republican fund-raiser and strategist, and occasional on-air critic of election results. He is also the victim of a severe psychological trauma that has rendered him unable to recollect anything that transpired between January 2001 and 2009, when he masterminded one of the most disastrous presidencies in American history, an ordeal that is the possible source of his trauma. Thus, Rove wanders the Earth in a haze, experiencing hazy flashbacks to a history he cannot recall and expressing his anguish in the form of op-ed columns, like today’s:

Rove knows that something terrible happened, but he is unable to identify it. So, for instance, Rove is unaware that the last president presided over the weakest economic expansion in postwar history. (Look at the two bars on the right — they’re both from the Bush administration.) 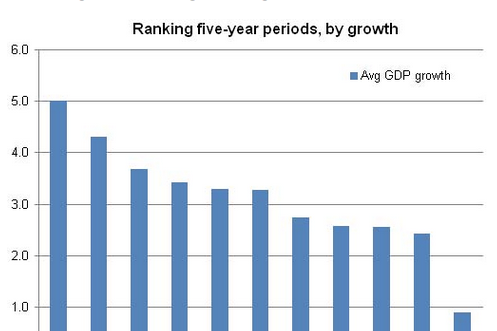 And now he is decrying the “feeble 2.9%” average growth in Gross Domestic Product under President Obama.

Likewise, Rove assails the rate of job growth during the current recovery, sadly unaware of this, via Paul Krugman: 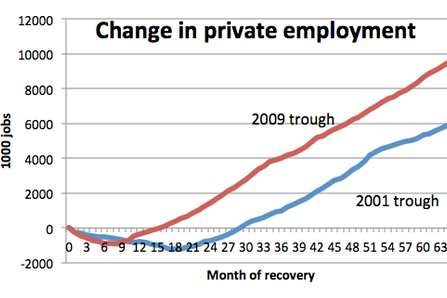 Having left his successor with a deficit well over $1 trillion, having passed a huge tax cut, a new Medicare entitlement, and a giant defense buildup without any budget offsets, Rove knows something terrible happened. He is expressing his trauma by blurting out things like “The ballooning debt reflects the administration’s — and the Democratic Party’s — deficit spending” and “The president squandered six years by refusing to make modest reforms to hold down growth in entitlement spending while giving people time to adjust.”

So deep is the trauma that Rove is not even able to recall any of the foreign events that took place during this period. After castigating Obama for leaving his successor with a mess to clean up, Rove writes, “This is only a partial list of the domestic challenges Mr. Obama will pass on to the next president and doesn’t include the long roster of international problems he has created, ignored or messed up.” Perhaps Rove is better off not knowing.