Each week, Daily Intelligencer will assemble a selection of the most amusing or simply bizarre details about the campaign season that are entirely lacking in news value. This week’s crop of less-than-important election news — which stood apart in a week during which the internet spent an inordinate amount of time discussing lunch and logos — includes mentions of Nicki Minaj, Iowa-themed T-shirts, and a shirtless Marco Rubio.

Ready for Hillary … to Start Drinking
As her campaign began on Monday, Hillary Clinton announced that she was ready to “drink my way across Iowa.”

Note to Candidates: Beware Children Who Live in Iowa and Wear Passive-Aggressive T-Shirts
Hillary Clinton took a photo with a 5-year-old boy wearing a T-shirt that said, “Iowa: Wave the next time you fly over.” His mom knew that they would reminisce about that moment for decades. “I’ll say that my son took his picture with the first woman president, which is very cool. That’s why we came today.”

Ben Carson Flip Flops
A week after publishing an essay in the Washington Post noting that “selfies are dangerous,” Ben Carson sent a selfie to a reporter.

Marco Rubio Probably Sad He Missed Coachella
Senator Marco Rubio announced his presidential campaign and revealed his love for Nicki Minaj and EDM to TMZ. He bragged that this wasn’t the first time he had talked to TMZ about music. However, not all the bands he named appreciate Rubio’s endorsement. Axwell ^ Ingrosso released a statement after Rubio’s presidential announcement saying they no longer wanted him to play their music. 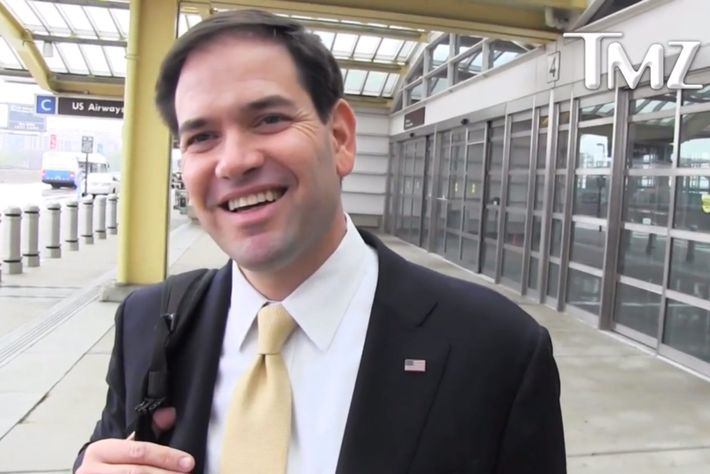 Lindsey Graham Already Planning White House Renovation
Senator Ted Cruz’s presidential campaign mailed out fund-raising letters that said owning guns is “the ultimate check against government tyranny.” Senator Lindsey Graham, himself thinking about a presidential bid, disagreed. “I think an informed electorate is probably a better check than, you know, guns in the street.” Lindsay Graham also said that if he becomes president, he will build a Chick-fil-A drive-through at the White House.

If a Burrito Is Eaten in the Woods and No One Notices …
Someone in New Hampshire asked George Pataki if he planned to run for president. “I’ve got to be careful,” he replied. “There’s a lot of cameras here.” He also went to Chipotle.

His Workout Mix Probably Doesn’t Include Nicki Minaj
Rand Paul pumped up for his trip to New Hampshire by going for a run around the National Mall — while wearing a “Live Free or Die” T-shirt.

I went on a great monument run today in my 'live free or die' t-shirt. Getting pumped for my visit to #NH tomorrow! pic.twitter.com/Seip3r64mM

The Crucial Bitcoin-Using Demographic
Rand Paul, the first 2016 presidential candidate to accept Bitcoin, will appear at a Bitcoin event this weekend.

Still Young at Heart?
Former Texas Governor Rick Perry held a youth town hall summit in New Hampshire. “Along with a half-dozen young people Mr. Perry’s aides shepherded into the front row of a classroom,” according to The Wall Street Journal, “he spoke to 21 people, 14 of whom had white or silver hair.”

Exclusive
The New York Observer published an exclusive story on Marco Rubio’s past. “The son of a bartender and a housekeeper who emigrated from Cuba, Marco Rubio’s life story reads like something out of a fairy tale,” the reporter begins. “Less well known is Mr. Rubio’s skill as a burlesque performer.”

+Comments Leave a Comment
This Week in Weird 2016 News

THE FEED
3:35 p.m.
early and often
early and often
2022 Midterms: A Guide to the Races Worth Watching
By Ed Kilgore
A cheat sheet to keep track of all the crucial races, primary upsets, and campaign drama — Trump-fueled and otherwise — from now through Election Day.
3:30 p.m.
early and often
early and often
Trump Wants to Make America Vote Like It’s the 1960s
By Ed Kilgore
His demand that all voting occur on Election Day, in person, and via paper ballots would radically restrict voting nationwide.
2:55 p.m.
what we know
what we know
Top-Secret Documents at Trump’s Mar-a-Lago: What We Know
By Intelligencer Staff
The search warrant used by the FBI was unsealed, and it shows potential violations of the Espionage Act.