Barack Obama, fortunate beneficiary of precipitous drop in the uninsured that has unexplainably occured despite his disastrous health-care plan. Photo: Bloomberg/Getty Images

Not long ago, the hypothesis that Obamacare would substantially reduce the uninsured rate was a point of fierce ideological disagreement. The National Center for Policy Analysis, a major conservative health-care think tank, predicted in 2013, “the massive law that was enacted to solve the problem of the uninsured in America is more likely to worsen it.” “At the end of the day, for all of the rhetoric and promises about what Obamacare would achieve, the health law’s most ardent supporters have stuck to their guns because of one thing: coverage expansion,” wrote Avik Roy, a leading Republican health-care adviser, in 2014. “But new data suggests that Obamacare may fail even to achieve this goal.” Obamacare would result in “essentially the same number of uninsured,” insisted Charles Krauthammer in February 2014.

The point of this little walk through the past is that Gallup has a new survey out today, and lo and behold, the uninsured rate has fallen again: 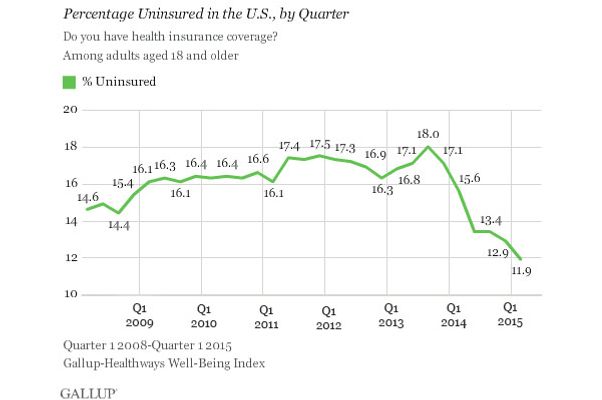 It is starting to look possible that this trend is not some random fluke that has happened six straight quarters but is somehow related to the enactment of Obamacare. So any day now, we can expect conservative politicians and intellectuals to begin publicly rethinking their analysis of this law.

THE FEED
13 mins ago
what we know
what we know
5 Memphis Cops Arrested for Murder of Tyre Nichols
By Chas Danner
Footage of Nichols’s arrest and “savage” beating will be made public Friday.
9:00 a.m.
guns
guns
Coming Soon to Stores: The AR-15 for Kids
By Matt Stieb
Next month, an assault-style rifle could wind up in the hands of children unless regulators step in.
8:00 a.m.
early and often
early and often
The Data-Driven Strategy Behind Democrats’ State-Level Success in 2022
By Eric Levitz
The president’s party almost always loses state-level power in midterm elections. Here’s how Democrats bucked that trend last year.