Now that he is no longer the chairman of the Federal Reserve and is now a blogger, Ben Bernanke is free to point out certain obvious truths he couldn’t say previously, such as the fact that The Wall Street Journal editorial page is run by crazy people. Bernanke is not quite putting it in those terms, alas, but his blogging career is young. In response to a Journal editorial calling for higher interest rates to tame inflation, Bernanke notes that the Journal has been wrongly forecasting higher inflation for nine years now:

It’s generous of the WSJ writers to note, as they do, that “economic forecasting isn’t easy.” They should know, since the Journal has been forecasting a breakout in inflation and a collapse in the dollar at least since 2006, when the FOMC decided not to raise the federal funds rate above 5-1/4 percent.

The singed Journal editorial page replies today that this is not fair. According to the Journal’s editors, their editorials haven’t been forecasting higher inflation. “We’re not always right,” replies the Journal, “But we’ve been careful not to join some of our friends in predicting inflation from the Fed’s post-crisis policies. We’ve written that we are in uncharted monetary territory with risks and outcomes we lack the foresight to predict.”

So the Journal’s very tightly constructed defense is that they have published a continuous stream of op-ed columns by their ideological allies (“our friends”) hysterically predicting hyperinflation. And the editorials themselves have warned about “risks” and “outcomes” — i.e., rising inflation — without actually making a concrete prediction that inflation will rise.

First of all, the lay of the land, in case you missed it, is that inflation has stayed historically low for a very long time. This, via Paul Krugman, is a nice chart because it gratuitously ridicules inflation-hysteric Paul Ryan: 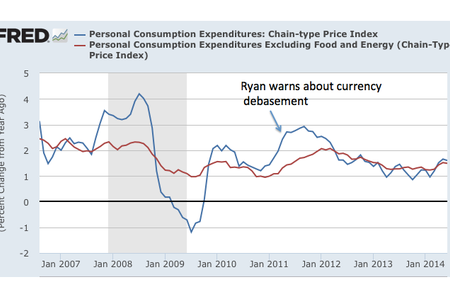 Bernanke links to a 2006 Journal editorial castigating the Fed for ignoring the threat of inflation. The Journal wrote:

The Fed’s Open Market Committee decided not to raise interest rates again — not because inflation is contained but because it says the economy is slowing.

as we all learned the hard way in the 1970s, inflation can increase even when growth slows if the Fed has printed too much money and pricing pressures continue to pass through the economy.

And yesterday’s data for second-quarter productivity and labor costs were far from reassuring on that score. …

Mr. Bernanke no doubt hopes that yesterday’s pause is one that refreshes; we fear it has only postponed the ultimate day of reckoning.

According to the Journal, this was not a forecast of higher inflation. It was merely a series of warnings that higher inflation seemed to have arrived or would arrive soon. Likewise, the Journal editors mused in 2009, “No wonder the Chinese and other dollar asset holders are nervous. They wonder — as do we — whether the unspoken Beltway strategy is to pay off this debt by inflating away its value.” This was also not a forecast. It was mere “wondering.

Then in 2011, the Journal editorialized:

Last September, the committee declared that it wanted prices to rise more rapidly, and on that score it has succeeded. The question now is whether the Fed’s success in promoting inflation is undermining the economic recovery it claims to be supporting. …

As for Mr. Bernanke’s confidence that inflation will be transitory, we hope he’s right. But we also recall his confidence in May 2007 when he declared that “Given the fundamental factors in place that should support the demand for housing, we believe the effect of the troubles in the subprime sector on the broader housing market will likely be limited.” We know how that turned out.

The headline to that editorial read, “Bernanke’s Inflation Paradox: The Fed said it wanted higher prices. Voila!” It would take a team of lawyers and literary deconstructionists to make the case that this was not a forecast of higher inflation.

But let us assume the Journal is actually right about this. They did not forecast higher inflation. They merely denounced policies to reduce unemployment on the grounds that they were inflationary, warned that inflation was a serious danger, and claimed that the Fed had “succeeded” in “promoting inflation.” Somehow this did not amount to a falsifiable prediction, because the Journal avoided using the explicit terms that, according to its team of lawyers and linguists, amounted to a technical “forecast.” Indeed, the Journal was, in its own words, “careful” to avoid committing itself to the conclusion that any sentient reader of its editorials might have reached, in much the same way that a mob leader, suspecting his phones might be tapped, would avoid explicitly ordering a crime. That’s a helpful defense if you’re trying to stay out of jail, but not if you want anybody to take your ideas seriously.