“If Hillary Clinton wins the presidency in 2016 she will not only be the nation’s first woman president but our second affirmative-action president,” writes Joseph Epstein. This may sound like Epstein is making the outlandish claim that Clinton and Obama are uniquely lacking in merit as compared to previous presidential candidates in American history. That is exactly what Epstein is claiming. In a bizarre, rambling essay that the Weekly Standard has deemed worthy not only of publication but of its cover, the esteemed conservative scholar asserts that presidential elections used to be based on intrinsic merit, until 2008. “How have we come to the point,” Epstein asks, “where we elect presidents of the United States not on their intrinsic qualities but because of the accidents of their birth: because they are black, or women, or, one day doubtless, gay, or disabled — not, in other words, for themselves but for the causes they seem to embody or represent, for their status as members of a victim group?”

Yes, that’s right. America used to elect presidents on “intrinsic qualities” rather than “accidents of their birth.” And this process resulted in the election of forty-three consecutive white men, an outcome Epstein must regard as an extreme coincidence. The last president to be elected on the basis of intrinsic qualities rather than accidents of birth was George W. Bush, whose birth circumstances, Epstein apparently believes, had no bearing upon his career trajectory. 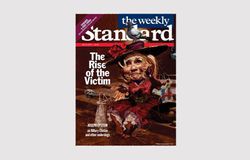 The whole essay is a remarkable testament to the level of delusion of right-wing identity politics. Epstein does not merely claim that pockets of left-wing thought in academia and elsewhere have allowed social-justice ideology to go too far, an argument with which I sympathize. He argues that white men as a whole have become a subaltern class. Epstein is attempting to intellectualize a sentiment coursing through the right and given daily expression in such places as Fox News and talk radio, but in so attempting serves only to demonstrate its sub-intellectual character.

On its face, the idea that white men have become a victim class is hard to square with the ethnographic composition of the economic and political elite, which remain far more white and male than the population as a whole. Epstein clearly believes this to be the case. Apparently unaware of a vast trove of evidence proving the continuing existence of traditional race and gender discrimination, he refers to it in the past tense. (“Everyone knows of the travails of slavery and beyond, the battles of women for equality in the workplace and elsewhere, the mocking and shunning of homosexuals, and the degrading of other victim groups; it was genuine, and painful.” Emphasis added.) Epstein likewise asserts, “Today it is the victim who is doing the bullying.”

After a painful meandering tour through Epstein’s view of contemporary America, he returns at the conclusion to his premise about Clinton as an affirmative-action hire, which he has not bothered to substantiate. Here is Epstein’s evidence that Clinton plans to run a campaign based on victimhood:

Given the large constituency of victims in America, Hillary Clinton, as a woman, has already climbed aboard the victim train in the hope of riding it to the presidency. “When women are held back, our country is held back,” she said in a recent speech. “When women get ahead, everyone gets ahead. Our mothers and sisters and daughters are on the front lines of all of these battles. … But these are not just women’s fights. These have to be America’s fights and the world’s fights. We have to take them on, we have to win them together.” What a rich ragout of victimhood and virtue in those words!

Not only do these Hillary Clinton quotes contain no hint of personal victimhood, they contain an explicit appeal to common interest. The argument Clinton makes in this passage is that policies that prevent women from fulfilling their potential harm men and women alike, by depriving society of the ability to develop the potential talent of half its population. This is the most representative quote Epstein is able to find to support his thesis, and it instead makes the exact opposite of the point he claims.

In a larger sense, of course, the very existence of Epstein’s piece serves to disprove its thesis. If it is still possible for a white man to write an incoherent farrago of self-pity whose only shred of evidence directly undercuts its thesis, and have such drivel thrown onto the cover of a national magazine, then white men are probably still doing okay.