Yesterday, Hillary Clinton surprised immigration advocates, and nearly everybody else, by taking an unexpectedly liberal stance on executive action and comprehensive reform. There’s no reason to doubt that Clinton, like most Democrats, genuinely believes in the humanitarian and economic merits of these policies. But it is also a power play that demonstrates how swiftly the immigration issue has moved in her party’s favor, and how she plans to box in her opponents.

As recently as 2012, it was possible for analysts like Sean Trende to deny that the white vote was steadily shrinking as a percentage of the electorate. But as Mitt Romney’s campaign labored to assemble a majority coalition, it dawned upon his strategists that they positioned themselves on the short end of a hardening demographic trench war, with a vanishing margin for error. “This is the last time anyone will try to do this,” confessed a Republican strategist, in reference to the task of a Republican campaign reliant on a supermajority of white voters.

Nobody really disputes anymore that the white vote is shrinking steadily. This chart, via Rob Griffin, William H. Frey, and Ruy Teixeira, displays the trend of eligible voters by race: 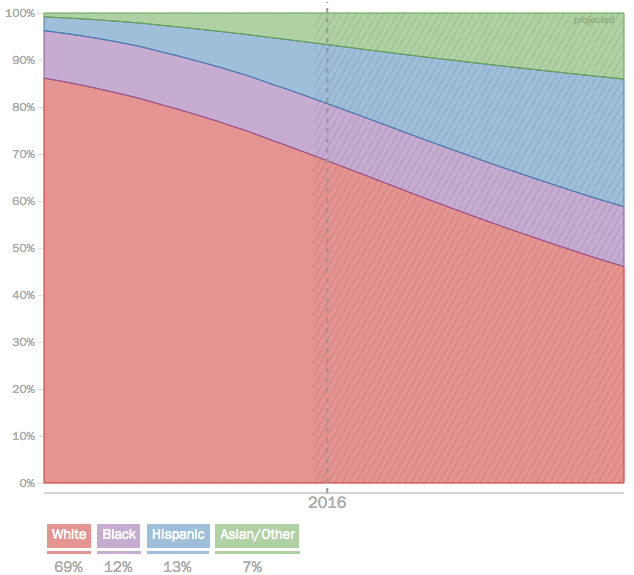 Now, it is true that Republicans could compensate for this adverse trend by continuing to increase their share of the white vote, but that strategy runs into a second problem: The youngest white voters are also the most liberal and Democratic, and the oldest white voters the most conservative and Republican. On its own, cohort replacement will make it harder, not easier, for Republicans to build their white supermajority. The straighter line to majority status would seem to be tamping down the Democrats’ huge margins among nonwhite voters.

After the election, that became the Republican plan. The party would take immigration off the issue table by, as quickly as possible, cooperating to pass a major reform, and thus giving the party a chance to appeal to Latinos and other immigrant communities. Even such previously opposed partisan stalwarts such as Sean Hannity and Charles Krauthammer, frightened by 2012, signed on.

But the immigration-reform effort, spearheaded by Marco Rubio, collapsed in Congress. Then President Obama used his executive authority to effectively liberalize immigration law, placing Republicans in a bind: Now their voters would not only demand that they oppose a Rubio-style immigration-reform plan, but also that they pledge to overturn Obama’s executive action. Candidates like to fudge promises by hiding behind Congress, whose cooperation is normally required, and that can shield them from accountability. But executive action is unilateral; it’s hard to fudge a promise you can carry out alone on your first day in office.

Obama’s move set up the dynamic between the two parties leading up to 2016. Democrats are trying to define the immigration issue as starkly as possible. Republicans are trying to do the opposite. The game now is for the Republican candidate to make it through the primaries with the maximal leeway to move to the center on immigration policy after the nomination is secure, and for Democrats to make that as difficult as possible.

Jeb Bush, of course, is running openly as an advocate of comprehensive reform. Rubio has renounced his own plan, but he is being very cagey. In an interview with Univision last month, he promised not to overturn Obama’s executive action until a legislative solution would be put in its place. (Rubio’s advisers initially told conservative media that his interview, which took place in Spanish, was mistranslated, but ultimately conceded that the initial interpretation was fundamentally correct.)

Likewise, in an interview with NPR at the time of his announcement, Rubio reduced his immigration position to “Obama is bad”:

Aside from generalities, like the need to control the border before helping current illegal residents, Rubio has thus far avoided policy commitments he could not wriggle out of as a nominee. The endgame of Rubio’s plan seems to be to emphasize the re-sequencing of his immigration stance to Republican voters — secure the border first — and then, if nominated, resume talking about the parts that happen after the border is secured.

Even Scott Walker has left himself space to maneuver. Walker used to favor immigration reform, then flip-flopped. He obviously has little interest in the issue as policy. Recently, Walker mused about reducing legal immigration levels, a controversial and unusual position that branded him as the candidate of restrictionists. But Walker may have had a more clever game in mind. By opening up the issue of legal immigration, he wins restrictionist favor without committing himself to anything irreversible. Walker only said “the next president and the next Congress need to make decisions about a legal immigration system that’s based on, first and foremost, protecting American workers and American wages.” He could always decide as the nominee that current levels of legal immigration are protecting American workers just fine. Meanwhile, while he opposes “amnesty” and demands border security first, Walker is also quietly leaving the door open to give illegal immigrants a path to citizenship.

That is the door Clinton is trying to close. She is advocating a broader application of Obama’s executive strategy, expanding the number of undocumented immigrants who would be eligible for lenient treatment. She further has denounced “legal status,” a favorite Republican term of art that attempts to fudge the treatment of illegal immigrants. “When they talk about ‘legal status,’ that is code for second-class status,” asserted Clinton. This is accurate, and also clever. Clinton’s issue stances will force Republicans to respond. By clarifying the questions Republicans would like to keep muddled, she is making the conversation as uncomfortable for them as possible. She is likewise demonstrating how quickly the political power of the immigrants-rights movement has blossomed.