In 1972, the neoconservative intellectual Irving Kristol defended existing income inequality on the ground that it simply reflected the natural distribution of human ability. “Human talents and abilities, as measured, do tend to distribute themselves along a bell-shaped curve, with most people clustered around the middle, and with much smaller percentages at the lower and higher ends …” he argued. “This explains one of the most extraordinary (and little-noticed) features of 20th-century societies: how relatively invulnerable the distribution of income is to the efforts of politicians and ideologues to manipulate it. In all the Western nations — the United States, Sweden, the United Kingdom, France, Germany — despite the varieties of social and economic policies of their governments, the distribution of income is strikingly similar.” This was a comforting story for the right. The level of inequality in the United States happened to be a perfectly optimal reflection of the talent of the populace.

Kristol happened to make this case at just about the exact time when inequality had reached a nadir. In the four decades since Kristol wrote that, the gap between rich and poor has soared: 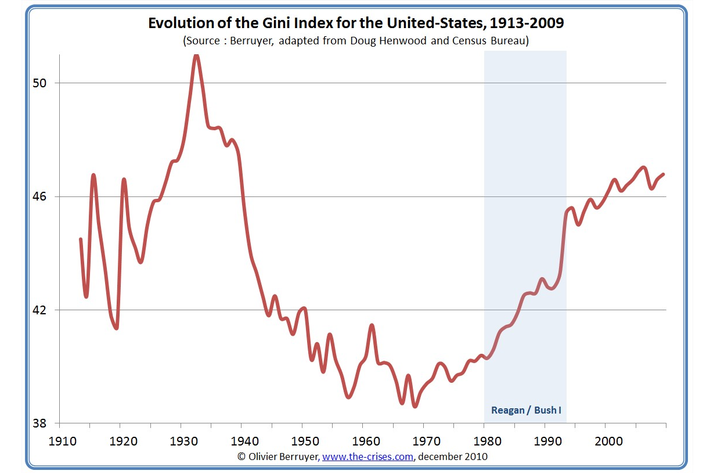 So, if Kristol was correct in 1972, and prevailing inequality reflected natural differences, then in the interim, either the distribution of innate talent has somehow changed dramatically or his argument has become very wrong. Indeed, the dramatic change in inequality is one of many pieces of evidence that patterns of inequality are neither natural nor immutable. Different social and governmental patterns can create varying opportunity for the poor to get rich or vice versa.

And yet the impulse to justify existing patterns of income distribution is powerful. Kevin Williamson reiterates the hoary case in National Review. Much of Williamson’s essay is dedicated to the straw man argument that liberals propose “eradicating” inequality, as opposed to the actual liberal position, which is to ameliorate it slightly while still accepting not only significant inequality but more of it than nearly any other advanced economy. Still, Williamson hits the familiar pro-inequality points. There’s the ritual mention of “Harrison Bergeron,” the Vonnegut short story about a dystopian society in which a “Handicapper General” levels down the smart, beautiful, and otherwise fortunate. There’s the likewise mandatory reduction of inequality to the fact that very short people can’t become basketball stars. And of course there are the paeans to the inescapable natural sources of inequality.

If inequality simply reflects individual qualities, why can we observe such stark differences in its level over time, not to mention between different countries? The answer, of course, is that public policies shape the distribution of both market and post-tax and transfer income.

Abstract thought experiments and references to old novels are a more attractive way for conservatives to frame their defense of existing economic privilege than engaging with the actually existing debate over inequality. The context of this debate is that the tax and transfer system in the United States does less to reduce market inequality than the systems in nearly any other advanced economy. Via Lane Kenworthy: 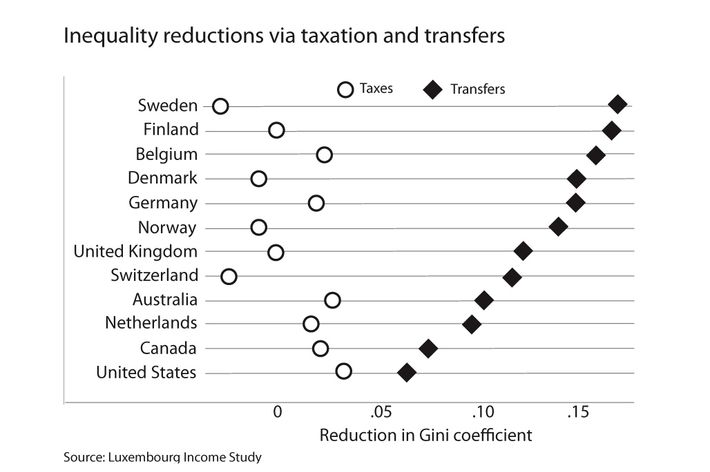 Inequality is the major theme of the American political debate because inequality is the major theme of the policy debate between the two major parties. The conservative economic agenda at the federal level is built around reducing the portions of the tax code that fall most heavily on the rich and spending that flows most heavily to the poor, and at the state level, to shift the financing structure of government onto the most regressive tax base. The liberal agenda has pushed in the opposite direction.

It is true that liberals talk explicitly about inequality much more than conservatives do. But to conclude that inequality is simply an issue that liberals care about far more than conservatives do (like greenhouse gas emissions, say) is mistaken. The agenda of both American parties is centered on firm beliefs about inequality. The main difference is that Democrats are more prone to frame their inequality-reducing policies as such, while Republicans (understandably) prefer not to frame their inequality-increasing policies in those terms.

And when conservative intellectuals do make inequality the text (as opposed to the subtext), they have a taste for framing the question in absolutist terms. The work of Ayn Rand is of course their favorite, but “Harrison Bergeron” runs a distant second. (Previous right-wing references to this story include this, this, this, this, this, and innumerable others.) Yet this story tells us nothing about actually existing liberal policies on inequality. The story describes an anti-inequality crusade so extreme it bears not the slightest resemblance to the actual United States. Vonnegut himself was a socialist, which might clue you in to the fact that he did not see this particular story as evidence that rampant egalitarianism had overtaken American government. If conservatives want to construct a persuasive defense of inequality, they need to locate their egalitarian dystopia not in old novels but in the world around them.

+Comments Leave a Comment
Conservatives Use Novels to Justify Inequality