In the Harper’s cover story on the Obama presidency, “What Went Wrong,” David Bromwich recapitulates mostly familiar grounds of left-wing disenchantment with the administration. (It is not available online for non-subscribers because Harper’s hates the internet.) Bromwich, though, arrives on creative new ground when he gets around to denouncing Obama’s policy toward Russia, which involves such crimes as “the defamation of Vladimir Putin”:

Victoria Nuland, the assistant secretary of state for European and Eurasian affairs, boasted in December 2013 that the United States had spent $5 billion since 1991 in the attempt to convert Ukraine into a Western asset. The later stages of the enterprise called for the defamation of Vladimir Putin, which went into high gear with the 2014 Sochi Olympics and has not yet abated.

Sadly, Bromwich does not spell out the details of this campaign of defamation, leaving his readers to imagine. Poor Putin, viciously smeared by Obama. His only crime was loving the eastern portion of Ukraine a bit too much, and, perhaps, shirtwear too little.

Bromwich explains that the campaign to defame Putin reached its nadir when Obama’s minions descended upon Putin’s own country to arm his enemies with cookies:

When Nuland appeared in Kiev to hand out cookies to the anti-Russian protesters, it was as if a Russian operative had arrived to cheer a mass of anti-American protesters in Baja California.

Right, it’s exactly as if Russian operatives had come to greet anti-American protesters in California. Except there aren’t anti-American protesters in California, largely because California is part of the United States of America. Kiev, on the other hand, is not part of Russia. It is part of Ukraine, which is a sovereign state. Don’t take my word on this. Go to the U.N. list of member states and scroll down to the Us: 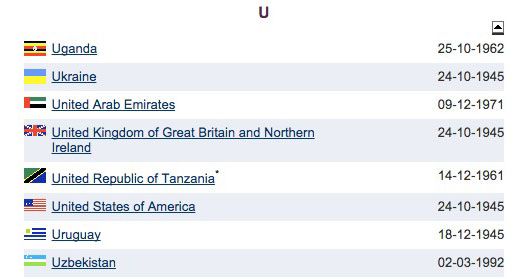 So this is one small, technical difference between the U.S. sending agents to Kiev and Russia sending agents to California*. Also, Ukrainians have this crazy paranoid idea that Russia is threatening them with a military invasion, and similar fears have yet to take hold in California. Other than that, it’s a good analogy.

*Update: I completely skipped over the “Baja” part of the sentence, which obviously changes the meaning, since Baja is part of Mexico, not the United States. Still, the point stands that there are not anti-American protests in Baja because the U.S. is not threatening to invade and annex it, whereas Russia is threatening to invade and annex more of Ukraine. Apologies for the hasty error.