You like me! You really, really… okay, you can tolerate me. I’ll take it. Photo: Ethan Miller/Getty Images

Hillary Clinton has been the subject of withering media coverage of her and her husband’s financial irregularities, that are either sloppy (if you’re generous) or overtly corrupt (if you’re suspicious) or utterly beyond reproach (if you’re Joe Conason). Has the coverage harmed Clinton’s popularity? Politico has an alarmist story predicting trouble. Matthew Yglesias dismisses the whole thing and calls Clinton “the most popular politician in America.”

What is actually going on here?

1. Politico’s measure isn’t terribly fair. It contraposes Clinton’s current favorable ratings with her ratings while she served as secretary of State, which reached as high as 69 percent. But most of Clinton’s fall has nothing to do with financial issues and has happened merely because she has returned from the non-partisan realm. Figures outside of partisan conflict can enjoy wide popularity (which is why former presidents tend to get more popular — Bill Clinton remains highly popular, despite the fact that he is more culpable than his wife in their financial troubles). The Clinton campaign was inevitably going to drag down Clinton’s popularity.

2. Yglesias’s measure isn’t fair, either. He cites one measure to support his contention that Clinton is highly popular: head-to-head polls in which Clinton defeats every Republican candidate.

That doesn’t make her popular, let alone the most popular politician in America. It just makes her more popular than the Republicans.

3. The most important force in American politics is “negative partisanship” — people forming nearly unshakable habits of voting for one party or the other based not on affirmative loyalty but on antipathy toward the opposing party. In a world of negative partisanship, high levels of popularity are nearly impossible, and/but also not required in order to win.

4. The country may be divided into mutually antipathetic blocs, but those blocs are not of equal size. People are pretty meh on the Democrats: 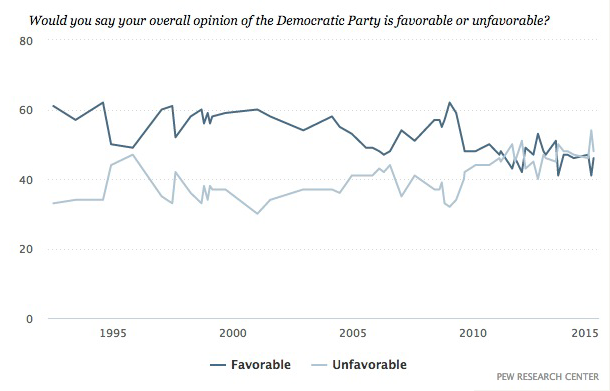 But they absolutely loathe the Republicans: 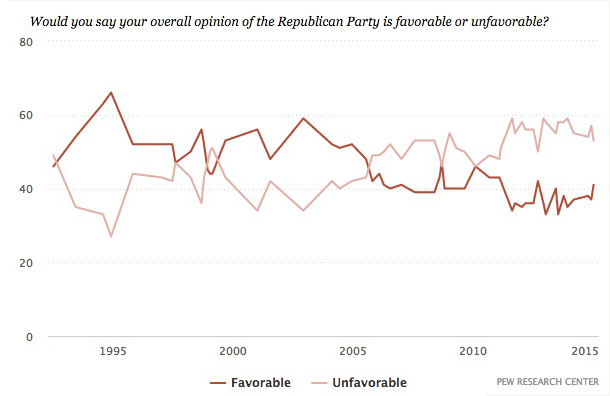 So that explains why Clinton is leading the Republican candidates.

5. But what about her personal contribution to this lead? One measure is to compare Clinton’s popularity with Obama’s. Obama’s favorable rating is modestly positive:

… and Clinton’s is modestly negative:

So Clinton is definitely not the most popular (or, to put it more accurately, least unpopular) politician in America. She’s a bit less popular than Obama, which may reflect her spate of bad press, or the fact that Republican messaging has begun to shift its emphasis from the horrors of Obama-ism to the horrors of Clinton-ism. She’s also probably not unpopular enough to lose.