The war on drugs is over, and weed won? D.A.R.E., the organization designed to plant a deep-seated fear of drugs in the minds of every late-20th-century middle-schooler, published an op-ed calling for marijuana legalization (which they now say was published by mistake, see the update at the bottom of this post).

Written by former deputy sheriff Carlis McDerment in response to a letter in the Columbus Dispatch, the op-ed explains that it’s impossible for law enforcement to control the sale of marijuana to minors. “People like me, and other advocates of marijuana legalization, are not totally blind to the harms that drugs pose to children,” McDerment writes. “We just happen to know that legalizing and regulating marijuana will actually make everyone safer.”

Anyone who suggests we outlaw everything dangerous to children would also have to ban stairs, Tylenol, bleach, forks and outlet sockets and definitely alcohol. Those things harm children every day, but anyone championing that we ban them would be laughed at.

I support legalization precisely because I want to reduce youths’ drug use. Drug dealers don’t care about a customer’s age. The answer isn’t prohibition and incarceration; the answer is regulation and education.

For a program that pioneered the questionable “just say no” policy, this is a breakthrough. 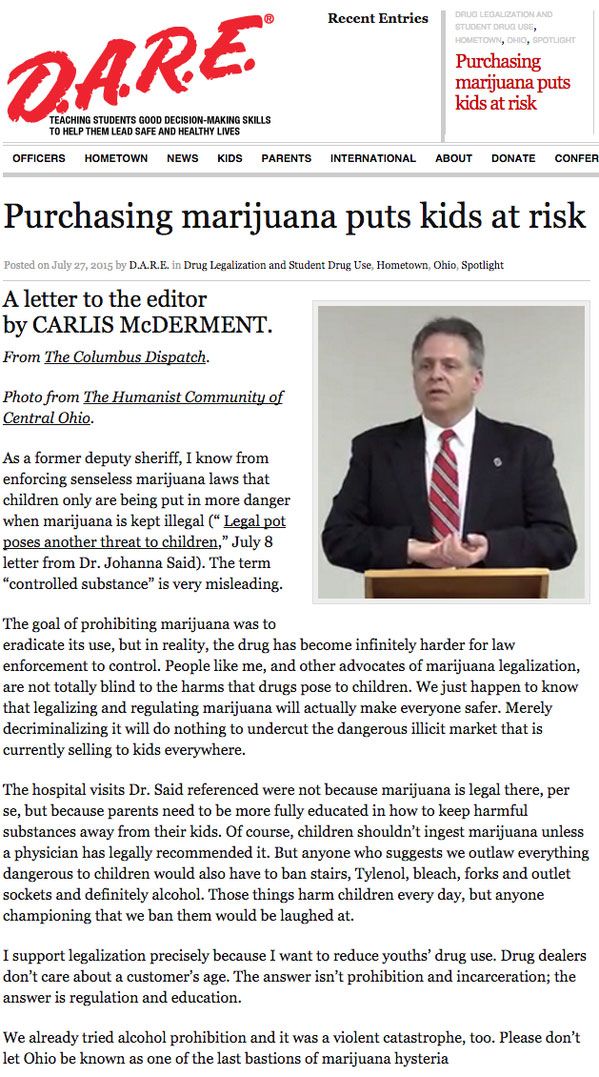 Update (7/31): D.A.R.E. appears to have removed the op-ed from its website. Here is the screenshot of the original post:

The article you wrote about was mistakenly posted on our website by a service we use. We have not changed our stance of being opposed to the legalization of marijuana.