The creation of high-achieving urban charter schools is one of the most impressive triumphs of American social policy. For all the success of the New Deal and the Great Society in ameliorating the hunger and deprivation of deep poverty, it has had but modest success breaking the power of social systems that allow affluent families to sustain their children in the same social class, while poor children cannot escape theirs. In a short period of time, urban charters have yielded impressive, even astonishing, success at closing the academic achievement gap between the poorest children and more privileged ones. The management of charter schools varies widely, but in urban centers, where education reformers have concentrated most of their energy, their performance has been especially strong. A major study earlier this year, carefully comparing equivalent student populations, found that urban charters on the whole produce an extra 40 days of classroom learning — eight weeks — in math, and 28 days of extra classroom learning in reading per student per year.

The Republican Plans to Replace Obamacare Have Been Tried, and They Failed
Is Neighborhood-Based Education Liberal?
Uninsured Rate Falls Again for Random Reason Totally Unrelated to Obamacare

Nowhere has this revolution had a more dramatic impact than in New Orleans, because nowhere has reform been carried out with such breadth. Ten years ago, Hurricane Katrina wiped out huge swaths of the city’s infrastructure and displaced its population, a disaster that paradoxically gave the city the chance to redesign its failing school system. Rather than re-create the neighborhood-based schools that had recapitulated generations of poverty, the city created a network of public charter schools. The charters, which have open admission and public accountability, have produced spectacular results. Before the reforms, New Orleans students — like overwhelmingly poor students in most places — lagged far behind more affluent students. Since the reforms, the achievement gap has nearly closed. The proportion of New Orleans students performing at grade level, once half the rate of the rest of the state, now trails by just 6 percent: 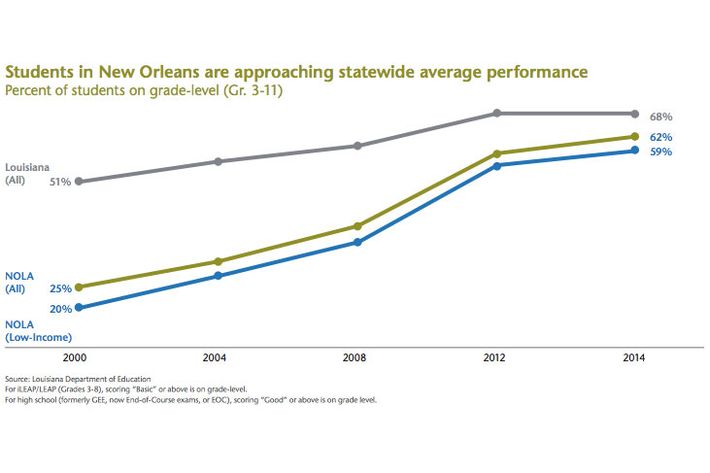 Economists at Tulane University’s Education Research Alliance for New Orleans compared the performance of New Orleans students with those of students in other Louisiana districts affected by Katrina. The contrast — between a school system that imposed a dramatic overhaul and those that merely rebuilt their pre-Katrina systems — was dramatic: 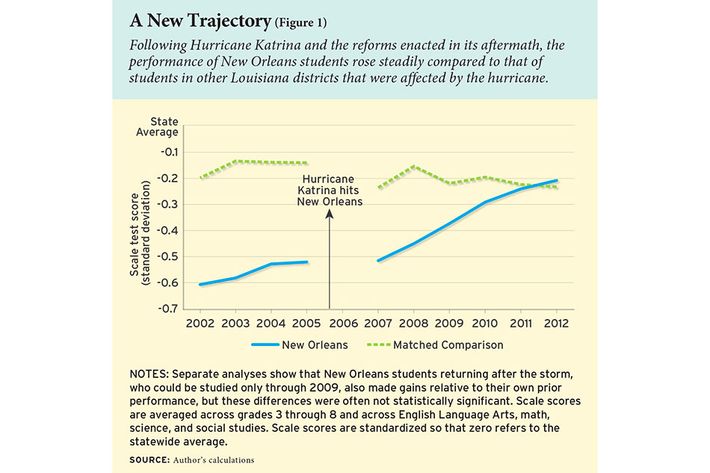 New Orleans provided the largest-scale experiment in charter education in the United States — a complete overhaul, undertaken all at once. The results have vindicated the strategy. As the authors concluded, “We are not aware of any other districts that have made such large improvements in such a short time.”

Unlike private schools, public charter schools cannot turn away applicants. Researchers studying the enormous gains registered in New Orleans have been able to rule out the usual sources of skepticism. The schools are not using stricter discipline to expel higher numbers of troublemakers — the city’s suspension rate is lower than it was before 2005, and also lower than the statewide average. (The system has a citywide process for major discipline, eliminating even the ability of principals to use suspensions to push out low performers.) Nor is New Orleans shortchanging students with disabilities, whose graduation rate in the New Orleans system (60 percent) dramatically exceeds their graduation rate statewide (43 percent). Nor is there any reason to believe the gains have come from schools “teaching to the test” — student performance on tests that have no accountability measures for the staff (such as the ACT) have also risen, as have graduation and college entry rates.

New Orleans is the breakthrough in social equity liberals have been waiting for. “We tried to make urban districts better for 50 years. We tried more funding, more accountability, more pipelines of talent, more [professional development], more training, more certification rules, and on and on and on. After all of that time, and all of those cities, we still don’t have a single high-performing urban district in America. Not one,” Andy Smarick, an education-policy analyst, told me. “But the very first time we try an all-charter system, the first time ever, we get dramatically better results in only a decade.” And some liberals, like the Obama administration, have encouraged and praised its success.

But in many precincts of the left, school reform has provoked unrelenting opposition. That is because their structure cuts crossways through the liberal ideal of governance. On the positive side, charters break the link between property and school assignment. Students can choose to attend their school of choice within their city rather than be assigned into neighborhood schools, whose boundaries reflect the deep racial and socioeconomic segregation of entrenched housing patterns. In neighborhood-based systems, guaranteed enrollment in a school in a wealthy neighborhood is a valuable perk that is itself priced into housing — wealthy parents literally buy access to the best public schools.

But charters also break the traditional union model of teacher compensation. That model gives teachers high, and virtually absolute, levels of job security, and pays them based on years of tenure. There is no empirical basis to believe that this is an optimal method to recruit and retain quality teachers. Evidence shows that experience improves performance only after the first few years, after which longer tenure does not produce better outcomes. American teachers are much more likely than the teachers in other, higher-performing countries to graduate from the bottom tier of their college class, and the hiring process for teaching is far less competitive than for other fields. But teacher unions and their allies have lionized the old neighborhood-based model and its inflexible contracts.

Andrea Gabor, a severe longtime critic of charter schools, has an op-ed in Sunday’s New York Times purporting to debunk the “myth” of New Orleans’s successful reforms. Gabor’s argument, as Peter Cook shows, is riddled with important factual errors. She dismisses Louisiana for having low state standards, ignoring its implementation of the Common Core; she claims “no agency is responsible for keeping track of all kids,” when in fact two agencies perform this very function; she charges the charters with “leav[ing] little room for African-American leadership,” when in fact more than half the leaders of the city’s charters are African-American; and so on. Gabor advertises her bad faith by describing charters as “privatization” — an inaccurate term rejected by supporters and one that confuses readers by describing a different policy. (Privatization is a term used to describe using public money for private-school vouchers.) Her op-ed uses a mix of anecdotes and unsubstantiated generalizations to create the impression that she is refuting New Orleans’s proven gains.

Obviously, charter schools have not solved the problem of entrenched poverty in America. What they have demonstrated is the ability to develop the academic potential of the most underprivileged children, defying the fatalism of the right and the left. They have not proven the ability to scale up their successes to every single urban school district in America for the simple reason that it is impossible to prove something that has not yet happened. The debate at this point lies between those who want to build on the movement’s demonstrable progress and those determined to deny, in the face of mounting evidence, that it is even possible.

*Full disclosure: My wife (and chief intellectual influence on education reform), Robin Chait, has worked as a public-school teacher and an education-policy analyst, and works for a public charter school network in Washington.