An ISIS-released image of the Temple Baalshamin allegedly being blown up.

In May, when ISIS overtook and captured Palmyra, Syria, the world feared not just for the human toll, but also for the historical one: The desert city is crowded with impressive Roman monuments and a huge collection of ancient treasures.

ISIS’s extreme ideology considers many of these structures, which predate Islam, to be idolatrous and anathema to its strict interpretation of the religion. Militants set out to destroy artifacts — or loot and sell them for profit.

On Sunday, Syrian officials confirmed that ISIS had destroyed the Temple Baalshamin. It is a protected UNESCO World Heritage site and one of the city’s most important structures, built in the first century in honor of a Phoenician god. ISIS militants ringed explosives around the temple and detonated them, damaging the inside of the temple, and sending columns careening down around it. ISIS destroyed in seconds what had stood, mostly preserved and intact, for 2,000 years. 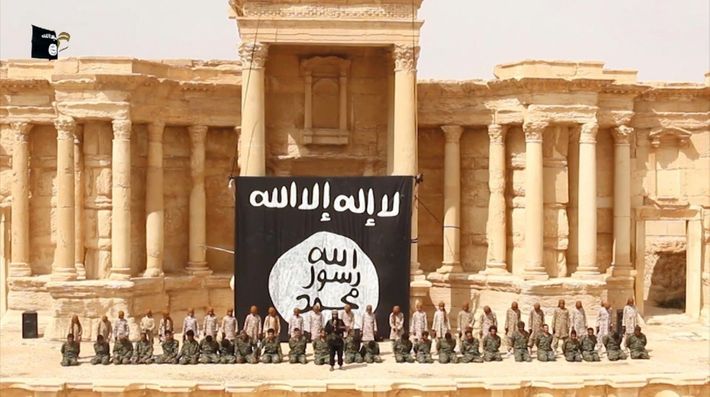 There are competing accounts of the temple’s destruction, with one group saying it had been bombed last month. But the head of Syria’s Directorate of Antiquities and Museums, Maamoun Abdelkarim, insists that reports point to the site being blown up this weekend. “We have said repeatedly the next phase would be one of terrorizing people,” he told the Times, “and when they have time they will begin destroying temples.”

UNESCO echoed Abdelkarim’s distress, calling the destruction of Baalshamin a “war crime.” Since ISIS took control of Palmyra, reports have trickled out, from both the Syrian state and extremist media, of ISIS attacking the city’s antiquities, including raiding and ransacking tombs. In July, it was reported that ISIS tore down the Lion of Al-Lāt, or the “Lion Statue of Athena,” another 2,000-year-old structure showing a lion guarding a gazelle — a “protective figure of  the ancient city” — that had stood outside the city’s museum. Around that time, ISIS jihadists also took sledgehammers to six statues from Palmyra.

ISIS has also attacked the keepers of these antiquities. Last week, militants brutally executed the retired chief archaeologist and historian Khalid al-Asaad — known as “Mr. Palmyra.” The militants had detained the 83-year-old, apparently questioning him about the whereabouts of the city’s most valuable historic treasures, some of which had been saved from the museum by historians as ISIS advanced on the city this spring. After the apparent interrogation, the militants dragged the academic to the town square and beheaded him, then strung his mangled body from a telephone pole, his head below his feet, with extremist media calling him the “director of idolatry.”

Also last week, southwest of Palmyra, in the town of al-Qaryatain — which ISIS captured from the government just two weeks ago — militants bulldozed the Mar Elian, a 1,500-year-old Christian monastery, and its church; kidnapped the priest and more than 250 Christians; and allegedly exhumed the remains of Saint Elian, who was martyred in the third century at the place where the monastery once stood.

Many of Palmyra’s most important and impressive structures remain intact, but ISIS’s zealousness and the incalculable worth of Palmyra’s ancient treasures have kept historians on edge. According to the Times, many monuments in the city, and across Syria, have been hit by fire and shells in the fighting between government forces and the Islamic State — collateral damage in the ongoing civil war.

Abdulkarim, Syria’s antiquities chief, said that a network of employees — modern-day “Monuments Men” — have managed to salvage and protect 300,000 historical objects. Yet some 10,000 archealogical sites across Syria remain vulnerable.

The historical carnage in Palmyra comes after ISIS has both taken down and obliterated ancient artifacts in cities from Homs and Aleppo in Syria to Mosul and Nimrud in Iraq, where ISIS blasted 3,000-year-old ruins this spring.