Jeb Bush just launched his campaign store on Wednesday. Like all campaign-store launches, there is one item that has attracted the most attention from the internet: a $75 guacamole bowl with no apparent branding to associate it with the former governor of Florida’s presidential bid. It is unclear why the bowl costs $75; as the website notes, “Jeb’s secret guacamole recipe not included … yet.”

@BKcolin Exact same bowl, half the price. I'm onto you, Jeb http://t.co/pnf8jN9hwK

*jeb speech writer furiously scribbles "America is not just a melting pot. It is a guacamole bowl."

Bush did some product placement for his soon-to-be-opened campaign store at a forum in New Hampshire on Monday. “My dad is probably the most perfect man alive, so it’s very hard for me to be critical of him,” he said during an answer. “In fact, I’ve got a T-shirt that says, uh, at the Jeb swag store, that says I’m the, um, I’m the, my dad’s the greatest man alive. If you don’t like it, I’ll take you outside.”

This T-shirt does exist, although the campaign’s pro-Bush messaging could get confusing if anyone besides Jeb and Dubya wears it. It is also unclear if Jeb Bush will now have to take all supporters who wear the shirt — tacitly acknowledging that their dad, not George H.W. Bush, is the greatest man alive — outside.

The “swag store” also features a bald appeal to millennials, who, rumor has it, will buy any article of clothing with a mustache on it. His vintage tank’s description notes that “He may be a clean-cut grandfather now, but back in the ‘70s, Jeb had a sideburn-mustache combo that would make Burt Reynolds blush. Wear this tank on South Beach to make sure he doesn’t forget it.” 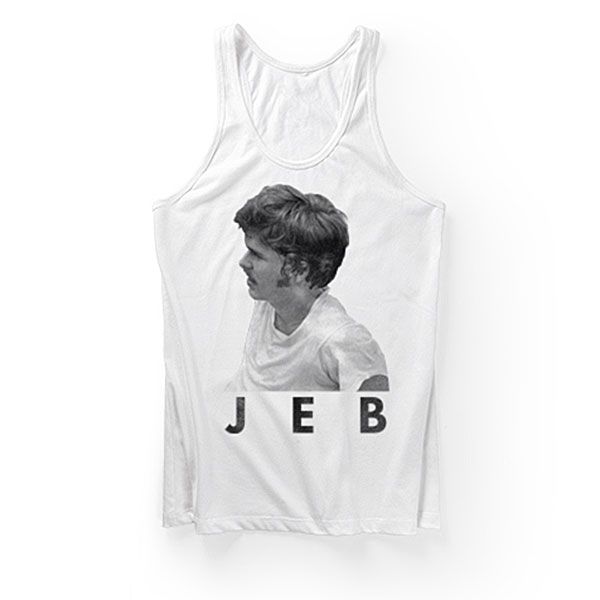 In 2012, Mitt Romney was luckily able to outsource his hipster merchandising to Urban Outfitters, which prevented his campaign from having to try too hard at looking cool.