A policeman and a gendarme stand next to a piece of debris from an unidentified aircraft found on the French Indian Ocean island of La Reunion, on July 29, 2015. Photo: Yannick Pitou/AFP/Getty Images

The discovery last week of what appeared to be a piece of Malaysia Airlines Flight 370 on the shores of Réunion Island seemed at first blush a giant leap toward solving the famously perplexing mystery. Officials declared that, based on photos, the part could only have come from a Boeing 777. And since only one 777 has ever been lost at sea, physical evidence of the vanished plane seemed at last to be irrefutably in hand.

This marked a huge break in the case, since before now not a single piece of wreckage had ever been spotted. The only evidence that the plane had gone into the ocean was a series of difficult-to-decipher signals received by the satellite company Inmarsat. The incongruity led some, including me, to question whether the plane had really wound up in the Indian Ocean at all. Back in February, I explained in New York how sophisticated hijackers might have infiltrated the plane’s electronic bay in order to spoof the satellite signals and take the plane north to Kazakhstan. MH370 wreckage on the shores of Réunion makes such explanations unnecessary.

Investigators hope to glean from the six-foot-long chunk important clues about where and how the plane went down. The piece, called a flaperon, forms part of the trailing edge of the wing, and was located just behind the right engine. The front part of it looks dinged up but more or less intact, but pieces on the side and much of the rear part have been ripped away. That damage might have taken place in the ocean, but if on inspection it appears to have been caused by high-speed airflow (as a plane might experience in a steep dive) or impact with the water, it could shed light on the flight’s final moments.

The fact that the debris was found on Réunion itself provides a hint as to where the plane went down. The island lies on the far side of the Indian Ocean from the suspected crash area, a distance of some 2,500 miles. The ocean’s strongest east-to-west current, the South Equatorial Current, runs about a thousand miles north of where searchers are currently looking. Should the search area be moved up? In the coming weeks oceanographers will be refining their models in order to figure that out. To lend a hand, biologists will examine the barnacles and other sea life found living on the debris in order to determine how long it was in the water and what part of the ocean it passed through. 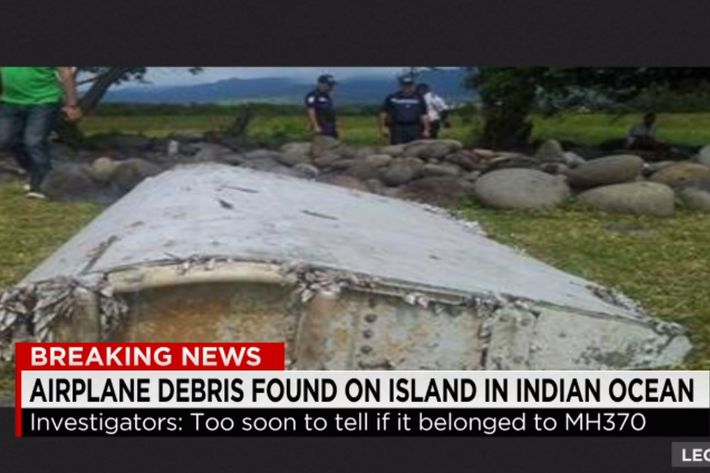 But, as if steeped in the weirdness of all things MH370, the Réunion flaperon came wrapped in an unexpected layer of ambiguity. All airline parts carry identifying labels, much as cars carry Vehicle Identification Numbers etched on the engine block. In the normal course of things, this plate should have been attached to the rib end of the flaperon and allowed investigators to make an instantaneous identification. As fate would have it, the plate is missing.

That’s why a hastily convened team of investigators from Malaysia, France, and the United States is meeting this Wednesday in Toulouse to open the sealed container in which the flaperon has been dispatched from Réunion. In the absence of a serial number, they’ll have to look for peculiarities of materials or construction that will allow them to say definitively that the flaperon came from MH370 and isn’t, as some have suggested, a discard from a parts factory in India.

It’s going to be a tricky job, and the stakes are high: MH370 has unnerved the aviation community like no crash before. Until we can figure out what took it down, the danger is ever-present that it could happen again.

While the world’s attention is on the flaperon, however, the sonar-scanning of the seabed on the other side of the Indian Ocean promises to tell us even more about MH370’s fate. If the small flotilla of search ships can locate the plane’s primary debris field on the ocean floor, they’ll likely find the black boxes that can tell us exactly what happened to the flight. But even if they don’t, they’ll reveal something important about what happened.

The area they’re scouring was defined through analysis of the Inmarsat satellite data. Part of the data tells investigators that the plane must have wound up somewhere along a broad arc 3,000 miles in radius. Another part, subjected to a new and complex form of analysis, showed that the plane headed in a generally southern direction. Where, exactly, depends on how it flew. If the plane flew slowly it would have taken a curving path and wound up north of a subsea feature called Broken Ridge. If it flew fast, its path would have been straighter and taken it south of Broken Ridge.

Among the attractions of the latter option was that it fit with an easy-to-imagine scenario: that, after flying up the Malacca Strait, whoever had been in control became incapacitated and the plane flew straight south on autopilot as a “ghost ship” until it ran out of fuel. Once that happened, the plane would have quickly spiraled into the ocean within a few miles of the final arc, meaning that the debris would have to be located within a fairly small area of seabed.

Last October, after months of internal debate, Australian officials decided that the straight-and-fast scenario was more likely. They laid out a 60,000-square-kilometer search grid and hired contractors to begin scanning. Their confidence in their analysis was so great that they reportedly kept a bottle of Champagne in the fridge, ready to be popped at any time. The longer they searched without finding the plane, officials said, the more their confidence grew, because they knew the plane had to be inside that box.

As time went by, however, a problem emerged: The plane wasn’t there. After six months, there was a 99 percent probability that the search had covered the calculated end point, and that number only kept climbing toward 100. Authorities stopped talking about how sure they were that it was in the 60,000-square-kilometer area, and announced that they would expand the search zone to twice that size.

What went unremarked upon in the general press was that there was no theoretical justification for the authorities to continue the search in this way. To get so far from the final arc, the plane would have to have been actively piloted, because only a conscious pilot could have kept the plane out of a death spiral. So the ghost-ship scenario was out the window. A plane held in a glide by a conscious pilot could travel for a hundred miles or more, far too huge an area of ocean to scan. The only reason to search the extra 60,000 square miles was that, for the authorities, it was better than admitting they had no idea what they were doing.

It also kept them from having to contemplate other unattractive alternative scenarios. Perhaps the plane didn’t fly straight and fast, but slow and curvy, and wound up north of Broken Ridge. It’s hard to imagine why someone would fly like this, but then again it’s hard to imagine why someone would sit patiently on a six-hour death flight to nowhere. If a slow, curvy flight was what happened, then again a terminal death spiral could by no means be assumed, and the required search area would be impossibly large.

To be sure, none of these scenarios make a lot of sense. But then, so much of what we know about MH370 is baffling. If the perps flew into the southern Indian Ocean because they wanted to disappear, why didn’t they just fly to the east instead of turning back over the Malay peninsula? If the aim was suicide, why not just put the nose down and crash right away, like every other suicide pilot we know of? And why did the perps turn off the satellite communication, and then turn it back on again, a procedure that — by the way — few airline pilots know how to do?

Though it has earned much less attention from the world press, the failure of the seabed search actually tells us a lot about what did or did not happen to MH370. And what it tells us is that this case is as weird as ever.

Jeff Wise is the author of the Kindle Single Fatal Descent: Andreas Lubitz and the Tragedy of Germanwings 9525.

+Comments Leave a Comment
MH370: Debris or No, This Case Is Still Weird