A six-hour standoff between federal marshals and the Staten Island man they hoped to arrest early this morning is now over. The man — who barricaded himself inside his basement apartment before setting it on fire — shot at officials with an assault rifle (wounding one firefighter) and posted Facebook updates while the standoff was ongoing; he is now dead.

Authorities have not yet confirmed how the man died, although reporters and residents nearby heard many gunshots shortly before officials announced the standoff had ended.

Thirty-eight-year-old Garland Tyree was the founder of Real Write Publishing, which, according to its website, is “dedicated to bringing you realistic Urban Fiction, filled with action, drama and most of all thought provoking material.” He had 18 prior arrests and several felony convictions. Federal marshals reportedly were arresting him this morning for violating his probation. An hour after the marshals showed up, he posted a short message on Facebook: “Today I die.” His friends quickly responded, first saying things like, “U will never die bro,” and then posting links to coverage of the standoff. “They kicked in my door and it popped off,” Tyree responded. 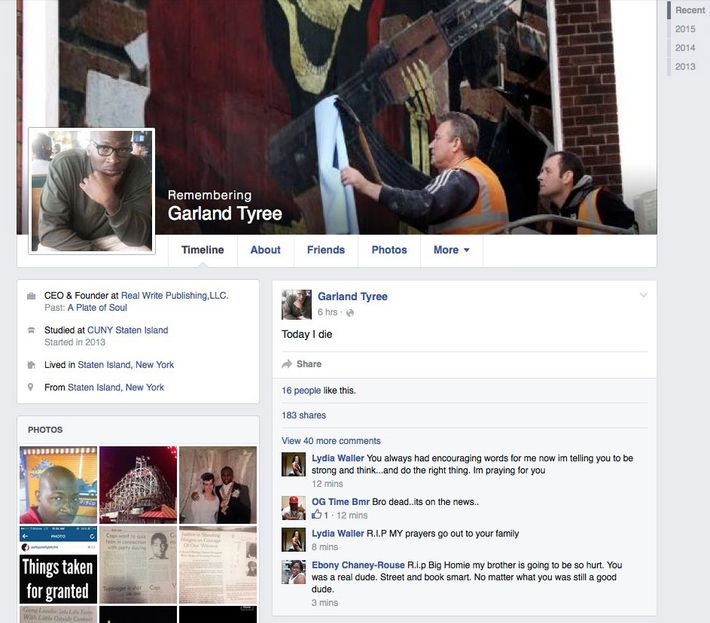 The Staten Island Advance reports that Tyree’s family is at the scene, yelling at police and crying. The family members were brought to the apartment to help NYPD’s hostage negotiators. The officers managed to talk to Tyree a few times on the phone before he hung up, saying his cellphone battery was low. Police Commissioner Bill Bratton was also in Staten Island at the end of the standoff.

The firefighter, who has worked for FDNY for more than 30 years and was at ground zero after 9/11, is expected to make a full recovery. Fire Commissioner Daniel Nigro told reporters that Hayes was the first firefighter shot in the line of duty in 21 years.

#FDNY Lt James S. Hayes, 53, of #Engine158 was shot responding to early morning reports of a fire on #StatenIsland. pic.twitter.com/MlYgbCBKZu

THE FEED
12/7/2021
confederate statues
confederate statues
Say Good-bye to the Nation’s Ugliest Confederate Statue
By Matt Stieb
The monstrous figure of Nathan Bedford Forrest was removed on Tuesday from a hill off the interstate south of Nashville.
12/7/2021
jamal khashoggi
jamal khashoggi
A Khashoggi Murder Suspect Was Arrested in Paris. Do They Have the Right Man?
By Matt Stieb
“It’s still possible that this is the right person, just as it’s still possible that it’s the wrong person,” a police spokesman said of the suspect.
12/7/2021
comptroller of the currency
comptroller of the currency
Saule Omarova, Smeared As a Communist, Withdraws Nomination
By Matt Stieb
Biden’s pick as a key watchdog was personally attacked by Republicans but sunk by moderate Democrats who opposed her tough line on banks.

12/7/2021
the money game
the money game
Why Wall Street Thinks Omicron Might Be Good News
By Kevin T. Dugan
A JPMorgan report suggests the variant could “accelerate the end of the pandemic.” Stocks, of course, are soaring.
12/7/2021
debt limit
debt limit
McConnell Strikes Convoluted Deal to Let Democrats Avoid a Debt Default
By Ed Kilgore
Leave it to Mitch to devise a phony mechanism to get Republican votes for a measure that will saddle Democrats wrongly with blame for debt increase.
12/7/2021
politics
politics
Unlike the Congressman, the ‘Devin Nunes’ Cow’ Account Just Won’t Quit
By Margaret Hartmann
Devin Nunes is headed to the Trumpy safe space that is Truth Social, but the parody Twitter accounts he’s suing for defamation are still at it.
12/7/2021
covid-19
covid-19
CDC Recommends Taking an At-Home COVID Test Before Indoor Gatherings
By Chas Danner
The new guidance says self-tests can be used regardless of vaccination status, the presence of symptoms, or a prior exposure to COVID-19.
12/7/2021

City Council votes 4-0 to give the Charlottesville’s Lee Statue to the Jefferson School African American Heritage Center (@JSAAHC) to be melted down and transformed into a new work of art. Donate to Swords Into Plowshares now: https://t.co/vhkizxdbbK
—@MemProjectUVA
12/7/2021
tesla
tesla
Finally, a Car That Lets You Play Video Games While Driving
By Benjamin Hart
Tesla’s innovations just keep coming.
12/7/2021
that happened
that happened
The Time Trump Held a White House Cabinet Casting Call
By Margaret Hartmann
During Trump’s wild search for staff five years ago, the right look was key, loyalty was optional, and there were wild cards (Ari Emanuel?) galore.
12/7/2021
2022 elections
2022 elections
How Trump-y Can the 2022 Georgia Governor’s Race Get?
By Zak Cheney-Rice
Probably very.
12/6/2021
covid-19
covid-19
What We Do and Don’t Know About the Omicron Variant
By Intelligencer Staff
While scientists search for clues about how dangerous the new variant is, at least 19 states and well over 40 countries have now confirmed cases.
12/6/2021
trump media & technology group
trump media & technology group
Donald Trump’s SPAC Is Being Investigated by the SEC
By Matt Stieb
The firm made plans to go public just two months ago.
12/6/2021
crime
crime
Everything to Know About Jussie Smollett’s Trial
By Bindu Bansinath and Amanda Arnold
The actor was accused of staging his own hate-crime attack in 2019. Things only got more complicated from there.
12/6/2021
the national interest
the national interest
Unofficial Trump Propagandist Devin Nunes Makes It Official
By Jonathan Chait
Republican leaves Congress to lead Trump Media & Technology Group, where his job will barely change.
12/6/2021
politics
politics
Swing Voters Don’t Explain Why Youngkin Won
By Ed Kilgore
It looks like the Republican’s win in Virginia was the product of poor Democratic-base turnout, not angry ex–Biden voters in the suburbs.
12/6/2021
cnn
cnn
Chris Cuomo and Jeff Zucker Speak Out
By Matt Stieb
CNN’s president hired the star in one of his first big moves at the network, then was forced to fire him over help he gave his scandalous brother.
12/6/2021
covid-19
covid-19
What We Know About Omicron in New York
By Intelligencer Staff
A dozen cases of the variant have now been confirmed in the state, and more are likely.
12/6/2021
politics
politics
Party Like It’s January 6
By Shawn McCreesh
A night out with Rudy Giuliani, Paul Gosar, and New York’s Young Republicans.
12/6/2021
just asking questions
just asking questions
Drawing Ghislaine Maxwell
By Choire Sicha
Talking to courtroom sketch artist Jane Rosenberg about her 40-year-plus career and what it’s like when a defendant illustrates you.
12/6/2021
politics
politics
State Legislatures Are Still the Key to Trump’s Election-Coup Efforts
By Ed Kilgore
The radical theory that state legislatures have total power over federal elections is at the heart of Trump’s past, and perhaps future, coup attempts.
12/6/2021
foreign policy
foreign policy
U.S. Announces Diplomatic Boycott of Beijing Olympics
By Chas Danner
American athletes will still be able to compete, but no U.S. delegation will attend in an effort to call out China’s human rights abuses.
12/6/2021
politics
politics
De Blasio Blindsides Just About Everyone With New Vax Mandate
By Nia Prater
City Hall won’t release guidance for how businesses should enforce the new mandate until December 15, following talks with the business community.
12/6/2021
politics
politics
Someone Put France’s Trump-y Presidential Candidate in a Headlock
By Benjamin Hart
Éric Zemmour’s first rally was marked by tension and violence, an atmosphere that matches his rhetoric.
12/6/2021
title 42
title 42
Why Is Biden Still Relying on an Idea From Stephen Miller?
By Matt Stieb
At the border, the administration continues to lean on Title 42 to expel migrants based on a public-health pretext that ex-CDC officials say is bogus.
12/6/2021
just asking questions
just asking questions
She Was D.C.’s Top Crypto Cop. Now She’s Silicon Valley’s Top Crypto Investor.
By Jen Wieczner
Katie Haun is spreading the Web3 word to everyone from senators to Hollywood stars.