Here is your weather forecast for the next week. Photo: Spencer Platt/Getty Images

It felt like summer got a one-month extension in New York City this September; the temperature rarely dropped below 70 degrees, and the sky stubbornly refused to entertain any rain clouds.

However, that good-weather marathon also left the city dry and reservoirs very parched. It all had to end eventually — and by “eventually” I mean “just a few hours from now.” Rainstorms are scheduled to start Tuesday night and could keep reappearing every day for the next week.

Time to find your umbrella and shake off the dust. Try not to cry when you see the below forecast.

The seven-day forecast used by NBC New York grades days from “Not As Wet” to “Could Be Stormy” to “Rain,” which, despite their lingustic dexterity, is a small range of options.

If you think that sounds dreadful, however, summer decided to throw a going-away party that probably left many residents saying “good riddance” instead of tearfully telling it to stay — the city was coated in soupy humidity and heat Tuesday afternoon that offered a good reminder of why fall is one of nature’s most brilliant ideas. Dropping temperatures are riding shotgun with the rainstorms; later this week New York City could get down into the 50s, just in time for October.

Don’t go making any exciting weekend plans to show off your new sweaters, however. The National Weather Service is currently keeping tabs on Tropical Storm Joaquin, which could make landfall in the tristate area or New England this weekend, coating the city in even more rain. 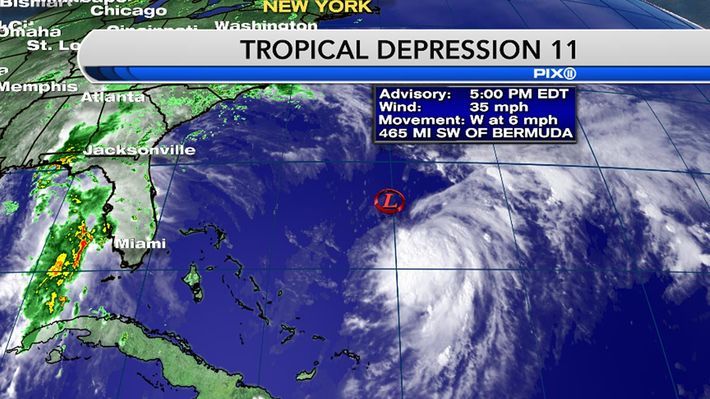 By this time next week, eight or nine inches of rain may have fallen on the region, an amount that is usually spread out across months.

Thanks to the thirsty dirt in Central Park and low rivers and lakes, this rain is a good thing — something to remember when you’re stranded with Seamless or sopping wet and cold over the next seven days — but at a certain point we may see enough water for flooding.

Meteorologists aren’t quite sure what Joaquin is up to yet, and they’ll be able to make a more definitive forecast by Thursday; right now predictions range from “not a big deal” to “maybe a category 1 hurricane?” As the National Weather Service notes in its forecast, “it should be repeated that the confidence in the track forecast is very low.”

+Comments Leave a Comment
The Never-ending Rain Is Almost Here