Jeb Bush has an idea that’s so crazy it just might work. Photo: Nicholas Kamm/AFP/Getty Images

Jeb Bush has raised fantastical sums from Republican donors, yet he finds himself trailing badly against a demagogue who has taken populist stances on taxing the rich, social insurance programs, immigration, and the donor class in general. Bush’s solution? Suck up more to the Republican donor class. Robert Costa and Ed O’Keefe report that Bush is meeting with the high priests of the Voodoo Economics cult: The Wall Street Journal editorial page, Steve Forbes, Larry Kudlow, Stephen Moore, and Arthur Laffer, along with various wealthy New York Republicans. Bush reportedly “hopes his tax offering will jumpstart his candidacy” and is sending “a signal to the party’s business wing that in spite of the rollicking race so far, Bush is mounting an aggressive fall campaign built around traditional GOP principles.”

The catch here is that cutting taxes for the rich is super unpopular. Americans as a whole want to raise taxes on the rich, not lower them. Even Republicans are split on this question: 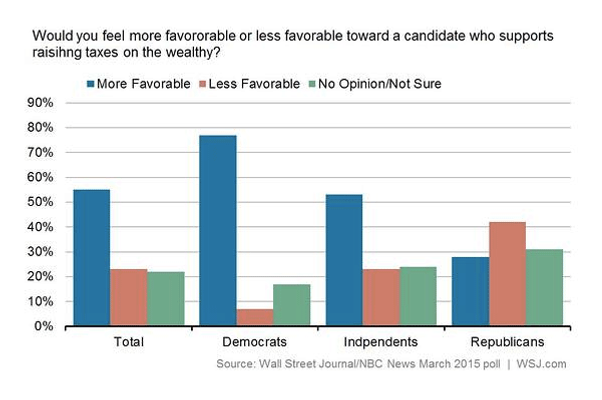 All of the non-Trump candidates are locked in a competition to outbid each other to propose the most lavish tax cuts for the rich. Trump is the one candidate appealing to the populist crowd within the party. Bush, Scott Walker, Marco Rubio, and others are all competing for orthodox Republicans who think the only problem with the Bush tax cuts is that they didn’t go far enough.

And, to be sure, there is always a careful sales job that must go along with this policy platform. The first rule of cutting taxes for the rich is “You don’t talk about cutting taxes for the rich.” You talk about tax reform, or whatever tiny tax credits you’re going to throw to the middle class. You save the frank discussion for the boardroom. Bush is following that strategy, too:

Here's a notable thing about Bush pitch: In NY mtgs., he's selling his slashing of corporate rate. Getting thumbs up from Wall St. types...

But in NC Wed, and so far on trail, Bush making an emphasis of cutting of corp deductions. More populist. Trying to straddle GOP spheres.

And perhaps Bush is worried that the Republican donor class will panic in the face of his struggles against Trump and throw its support to Rubio, Walker, or some other reliable water carrier. But if Bush needs to lock down the donors by giving them even more concessions, he’s also prying open even wider the ideological niche Trump has filled.