Toward the end of 1999, John McCain, who had previously been a Republican in good standing with the sole, idiosyncratic exception of his support for campaign-finance reform, wandered unexpectedly into truly heretical terrain. McCain opposed the tax cut proposed by George W. Bush, deeming it unaffordable and unfair. “Sixty percent of the benefits from Bush’s tax cuts go to the wealthiest ten percent of Americans,” McCain pointed out, promising, “I’m not giving tax cuts for the rich.” The conservative Establishment was apoplectic. McCain’s apostasy on taxes, which struck at the right’s entire conception of social justice, transformed his candidacy from an annoyance into a full-scale rebellion. Bush defeated McCain by rallying the party behind him and communicating to Republican voters that McCain was not one of them.

Since McCain, no Republican has challenged the party orthodoxy, which has made tax cuts for the highest earners sacrosanct. Even Jon Huntsman, the flamboyantly moderate liberals’-idea-of-a-good-Republican candidate from 2012, gamely raised his hand when asked if he would refuse to increase taxes even if he could get $10 of spending cuts for every dollar of revenue. Republican disagreements on domestic policy revolve around how to account for and sell tax cuts for the rich — whether and how much to cut spending to offset their cost, whether to throw in a little tax credit for the middle class on the side — not whether they should happen.

Donald Trump is the first candidate since McCain to essentially break the Republican candidate monopoly on taxes. To be sure, Trump’s position on taxes remains amorphous at best. But he has taken steps no other Republican presidential candidate since McCain has dared to take, opposing the carried interest loophole, and saying, “On some people, they’re not doing their fair share.” As they were with McCain, Republicans are apoplectic. The Club for Growth, one of the better-funded organs of supply-side economics within the GOP, is going to war with Trump. National Review’s Charles C.W. Cooke, exasperated that conservatives are supporting him, insists that Trump’s heterodox views on taxes put him at odds not only with the party elite but its base as well:

Contrary to the fevered imagination of the exasperated American Left, conservative candidates for public office do not tend to take a free-market approach to fiscal policy because it helps “the rich,” but because they believe in earnest that it helps the whole country. By and large, this same rule applies to conservative voters, many of whom may not always benefit directly from the lack of meddling and modest confiscation, but who conceive nevertheless that a capitalistic economy is likely to deliver better results in the long term than is a power-hungry Uncle Sam.

Cooke cites no evidence for his belief that Republican voters care about low taxes for the rich. Indeed, the data suggests otherwise. A study of public opinion by David Broockman and Douglas Ahler, via Byron York, breaks down overall public opinion on taxing the affluent into seven categories, from the most left-wing to the most right-wing. Broockman and Ahler found that arguments for increasing taxes on the rich collectively win support from about three times as many Americans as arguments for cutting taxes on the rich. Sixty-six-and-a-half percent of the public sides with one of the left-wing, raise-taxes-on-the-rich positions, against just 22.6 percent who support any of the three arguments for lowering taxes on the highest earners. (Slightly less than 11 percent favored a middle position, maintaining current tax levels, a position that is also to the left of Republican orthodoxy.)

The less than one quarter of the public that wants affluent people to pay less in taxes makes up a portion of the Republican base, but it is far from a consensus view, and probably not even a majority. Forty-five percent of Republicans are bothered “a lot” by the belief that some wealthy people don’t pay their fair share of taxes, and 52 percent are bothered a lot by corporations not paying their fair share. 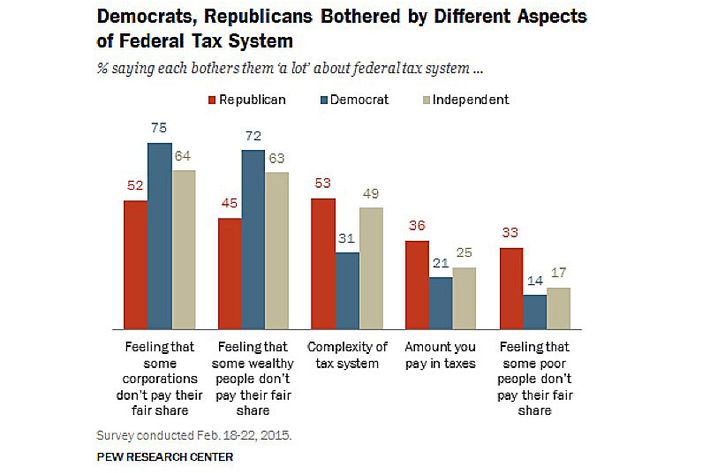 Trump’s obnoxious, bullying personality and restrictionist stance on immigration are surely the most important sources of his support among Republican voters. But his sole ownership of a centrist position on taxes, against 16 other candidates all competing for variants of an unpopular position, surely helps. Likewise, Trump’s defense of federal retirement programs aligns him with his voters and against the fervent desires of Republican insiders, whose preferences are reflected in the non-Trump field.

Trump has something going for him that McCain never had: a high-salience issue where he can stake out territory to the right of his opponents. On the other hand, he lacks McCain’s résumé as a war hero or his ability to draw huge numbers of independents and Democrats into open primaries. And Trump poses a mortal threat to the party’s standing among immigrant communities. All that makes it imperative for the Establishment to unify behind whichever regular Republican is the last one standing against Trump and extremely likely that candidate will win. Most voters make their choices on the basis of affinity, not an issue-by-issue rundown of the candidates’ policy platforms. In the meantime, Trump has revealed, again, the brittleness of the grip of anti-tax zealots upon the Republican Party.