The greatest way to reach out to millennials is to let them watch hours of you driving across Iowa. Photo: Brian Snyder/Reuters/Corbis

The Rand Paul campaign, which appears to still exist in a world where Meerkat is going to change the 2016 election and the Kentucky senator has a chance of becoming president, decided to live-stream an entire day of campaigning in Iowa on Tuesday. “It will be the Rand Paul campaign’s version of The Truman Show or EdTV,” Paul’s chief digital strategist told Rare.

So far, the stream has revealed that there is a reason that no presidential candidate has ever broadcast a day of campaigning live, as it mostly entails staring out at corn fields while driving for hours.

The more apt comparison for this day of broadcasting meet-and-greets and endless interviews live is Norwegian reality TV, which has birthed such scintillating programming as an 18-hour live broadcast of salmon swimming upstream.

Paul is not the only American trying to bottle up the magic of Norwegian slow TV and bring it stateside today: Novelist Joshua Cohen is in the middle of writing his modern adaptation of Charles Dickens’s Pickwick Papers, Google Docs style, with many people watching him type and delete words in real time — and offering much commentary. Neither Paul nor Cohen seem to have realized that the only surefire way to make very long live broadcasts work is to add a panda.

If this gimmick is actually Rand Paul’s version of The Truman Show, and not just a traveling filibuster designed to trick people into paying attention to the senator again, the hundreds of viewers who have tuned in thus far to hear what the libertarian candidate is listening to on the radio can look forward to Paul realizing that he hasn’t actually left seemingly idyllic Iowa in months, that he has been answering the same questions, shaking the same hands, and eating the same greasy foods for even longer … and that the people surrounding him might not care about him and are just spending time with him because they get paid to do so.

The live-stream has periodically paused, either because Paul is preparing for his next event, or because the stream’s producers are trying to hide from viewers the fact that Paul realized that even without the live broadcast he was trapped in a weird, months-long bit of performance art — something he should have realized long ago when an actual reality TV star entered the Republican presidential race — and is trying to get some much needed privacy by trying to escape on a tractor and find the secret exit to the real world. 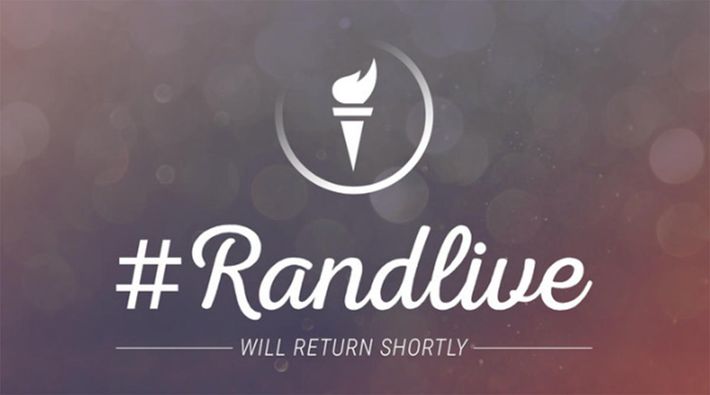