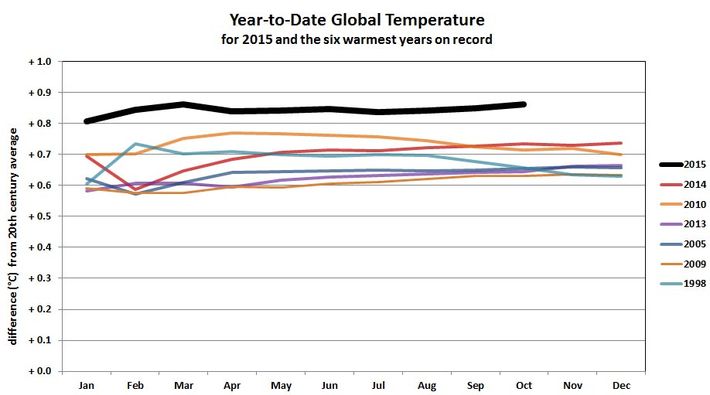 The data — when visualized like this chart, with splotches of red indicating record-breaking temperature percentiles and soaking wide swaths of nearly every continent and ocean — reveal that no portion of the globe has gone untouched by the temperature spikes. NOAA reports that “record warmth was observed across the entire southern half of Australia, part of southern and southeastern Asia, much of central and southern Africa, most of Central America and northern South America, and parts of western North America.” The only regions in the entire world to experience neutral heating gains or even cooling of some kind were the wilds of northeastern Canada and the tip of South Africa.

Oceans in both the Northern and Southern Hemispheres experienced record temperatures in 2015, including large portions of the Atlantic and Pacific Oceans, along with the entire Indian Ocean. Even Arctic waters around northern Europe exceeded historical averages. 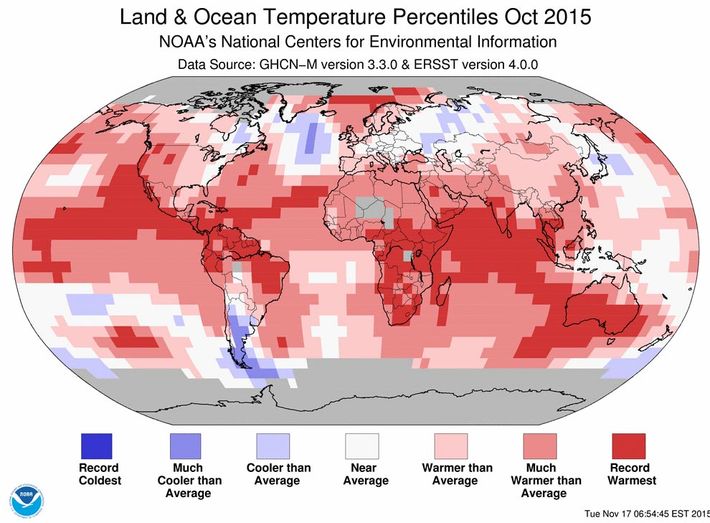 There is one familiar face responsible for this year’s global spike in temperature: the strongest El Niño in an 18-year-span. Thanks to the tropical phenomenon, ocean heat is being sucked into the atmosphere, raising temperatures in Pacific regions — particularly in the Northern Hemisphere — along with oceans globally. The tropical cycle is thought to be peaking right now, but its effects will last long into winter 2015–16, likely making it a damp, warmer-than-usual affair. This is good for those of us who get seasonally hopeless around March.

Even though El Niño cycles create anomalous peaks in yearly averages, this October spike is the real deal. As seen in the chart of El Niño cycles below (in red), the 2015 event is the highest in the 35-year span; even the accompanying La Niña cycles (in blue), when temperatures wane, are higher in the past ten years. 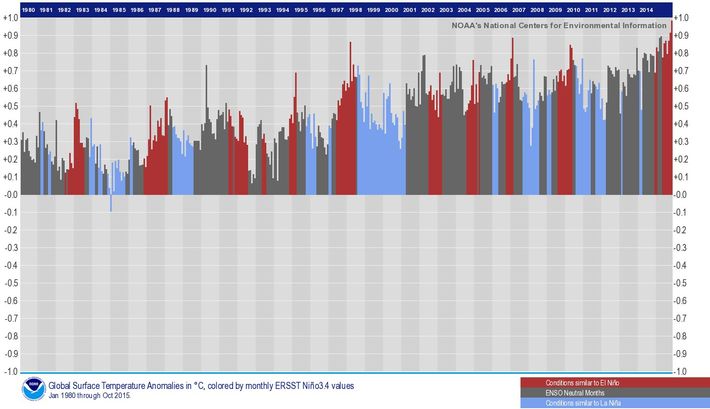 +Comments Leave a Comment
2015 Certainly to Be Warmest on Record