Bernie and Killer Mike at the Busy Bee in Atlanta. Photo: WPJohnWagner/Twitter

On Monday, a magical event happened, making this election cycle’s 47-month premature start completely worth it. Rapper-thinker-speaker Killer Mike stumped for rapper-thinker-presidential-hopeful Bernie Sanders in Mike’s hometown of Atlanta. The friendship — a modern-day Theo and Cockroach story — blossomed over the course of the day, with the peak being Mike’s characteristically verbose and impassioned speech about Sanders at his rally yesterday evening.

Before that, however, the two went to Busy Bee Cafe.

Brought this guy to Busy Bee on MLK in ATL. pic.twitter.com/K93EUniUZE

The restaurant is a staple in the Southwest Atlanta community, home of the seventeenth-best banana pudding in town (see: Browne, R. The Best 643 Banana Puddings in Atlanta, 2015 edition). Most of the chatter about the two at Busy Bee was simply about Bernie eating soul food with Mike. What’s not being discussed, however, is who else was at — okay, above — the table: Monica.

There were many pictures taken of the two, but there’s one image that made it explicitly clear what they were talking about over their meal. 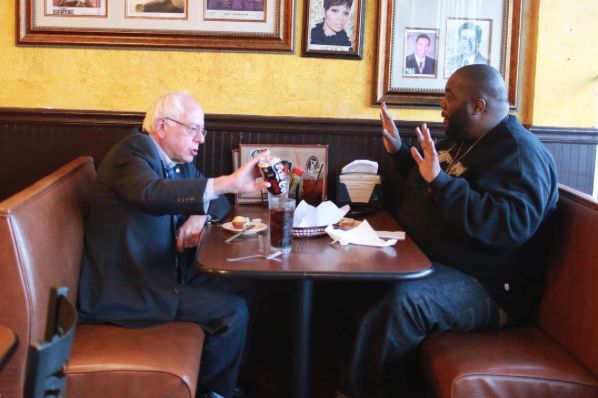 There’s tension and then there’s this — the moment a new friendship almost comes to a crashing, irreparable halt. According to my anonymous reliable imaginary source, this is probably what went down.

Sanders: This food is great, Mike. And on top of it all, I get to look at this picture of my favorite singer, Toni Braxton.

Mike: With all due respect Bern, that’s not Toni Braxton.

Sanders: You young boys, thinking you know everything. Do you even remember “Another Sad Love Song”?

Sanders: [Squinting] Oh, wow. It is, isn’t it? It’s even signed by Monica. WE’RE DOOMED. Just kidding — but my apologies. Shouldn’t have questioned the host.

Mike: No problem, Bern. I do love the fact you rock that old-school Toni.

Sanders: Of course. You have to forgive me about the Monica mix-up, though. I was always Team Brandy.

Mike: Wait, you said what?

Sanders: I said Team Brandy. You’re either for Monica or Brandy. And I picked Brandy, like everyone else.

Mike: Bern, do you want me to give this speech tonight?

Mike: Team Brandy is not a thing. If you have ears, and sense, you are Team Monica. I can’t believe I’m hearing what I’m hearing. I’m out here, about to stick my neck out for you in my hometown —

Sanders: Is this a joke?

Mike: Are you a joke? Do you want people to take you seriously? HOW DO YOU EXPECT TO WIN THE NOMINATION IF YOU ARE OPENLY TEAM BRANDY?

Sanders: I’m sure many presidents of the past were Team Brandy. You probably aren’t privy to this type of information, but I know for a fact that Reagan was Team Brandy. [Pours the rest of his Diet Coke into his cup.]

Mike: We’re going to have some problems, Bernie Sanders. [Throws hands in the air.]

How they patched it up by the evening, we’ll never know.