The Islamic State’s online magazine, Dabiq, released a photo labeled “EXCLUSIVE – Image of the IED used to bring down the Russian airliner” in its latest issue. A can of pineapple-flavored Schweppes Gold malt drink, plus a blasting cap and an electric switch, according to ABC News, are shown in the photo. 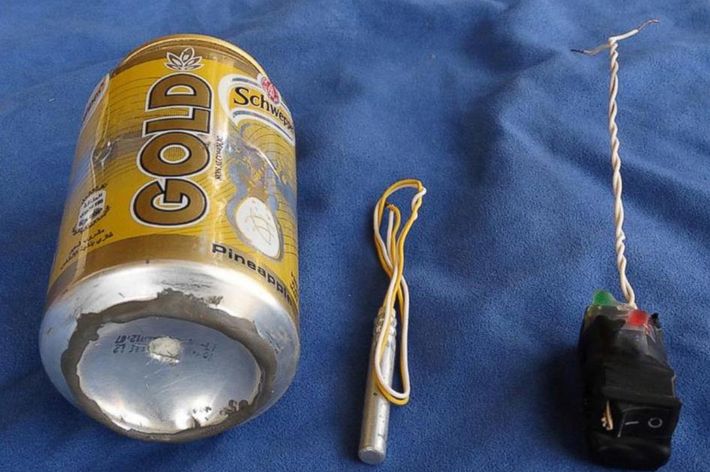 The photo has not been verified, but a former ATF agent told NBC News that it looked real, and that “if they used a reliable military-grade explosive … a very good quality military explosive with a fast detonating rate … then this would be enough to bring down a plane.”

The Dabiq article said the bombing was “revenge … exacted upon those who felt safe in the cockpits of their jets,” according to NBC News. The Islamic State says it targeted the plane because of Russia’s “arrogance” in beginning air strikes in Syria. The original target, the magazine alleges, was a Russian airliner. “A bomb was smuggled onto the airplane, leading to the deaths of 219 Russians and 5 other crusaders only a month after Russia’s thoughtless decision,” the article goes on to note, per the New York Times.

The Guardian reports that several Russian media outlets have said the bomb may have been brought on the plane by an airport employee and was perhaps set off by a timer.

Russian authorities said for the first time on Tuesday that a bomb “definitely” caused the plane crash, which took place on October 31 in the Sinai Peninsula. The country said it could not confirm that ISIS was responsible for the attack, but British foreign secretary Philip Hammond said there was a “high probability.”