Shaming people for their bad behavior on social media has become such a prevalent part of life online that Jon Ronson wrote an entire book about it, but less than a year after it was released, the scales by which we measure the costs and benefits of online callout culture continue to wobble. This week, an NGO in Brazil shamed racists by printing their objectionable tweets and Facebook posts as billboards and posting them in the writers’ neighborhoods. 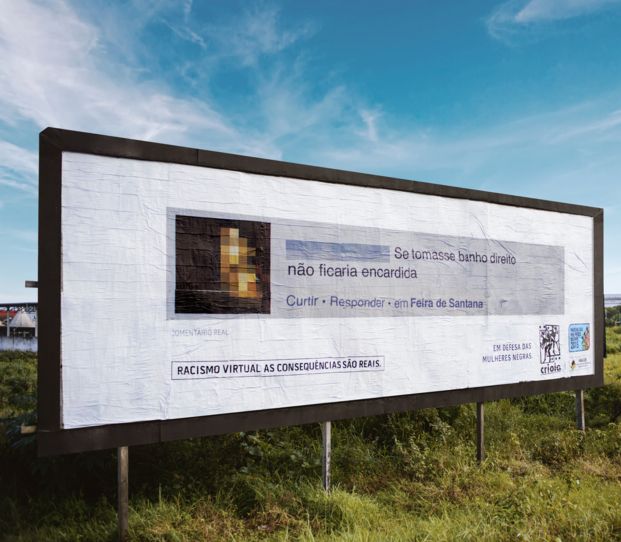 The internet typically calls out trolls by posting screenshots of their comments, or by amplifying those comments through Twitter and Facebook’s built-in share and retweet buttons. With a single click, the racist, harasser, or person you feel is Wrong on the Internet winds up with a larger audience than they ever expected. The public nature of social media goes both ways: It can be used to harass, but also to tie one’s own rope.

Criola’s Racismo Virtual is the real-world equivalent. They’ve tracked down racist comments in which the authors naively shared their location, and put up the message as billboards where the writers are likely to see them.

“Those people [who post abuse online] think they can sit in the comfort of their homes and do whatever they want on the internet. We don’t let that happen. They can’t hide from us, we will find them,” founder Jurema Werneck told the BBC.

But unlike Twitter, where a retweet bears the author’s username and photo, allowing others to find them and join in the ridicule, Criola’s billboards pixelate and redact the identifying information. If the writers come face-to-face with their own words, they might be the only ones who realize it.

Right now, there’s a line — a blurry line, but it’s there — between an acceptable callout on social media and the real-life analogue, but it’s not clear if it’s an ethical line or a programmatic one. The “retweet” button exists, and Twitter is public: Ergo, it must be okay to call attention to something objectionable by retweeting it.

But on the street, displaying that identifying information is still considered taboo — even though popular Twitter and Facebook users reach larger audiences than a single billboard. There’s no “retrieve the author’s location and post this message as a billboard in his neighborhood” button on Twitter (yet). If there were, would we use it?

Would we use it for good?

Racists’ Tweets Posted to Billboards Near Them