Donald Trump has been binging on inflammatory remarks in the past few days, jumping from suggesting that we track Muslim Americans, to condoning the assault of a black protester at one of his events, to insisting that thousands of Muslims in New Jersey celebrated on 9/11, despite evidence to the contrary. Then on Sunday afternoon, Trump retweeted a graphic from the Crime Statistics Bureau in San Francisco that shows black people are responsible for the vast majority of killings of both white people and other black people.

The problem: All of these numbers are made up, and the Crime Statistics Bureau of San Francisco doesn’t exist. Basically, people are far more likely to be killed by someone of the same race. The Washington Post reports that according to the FBI’s most recent data, 82.4 percent of murdered white people were killed by other white people in 2014, and 14.8 percent of white victims were killed by black people. The graphic’s number of blacks killed by blacks is off considerably, too — it’s 90 percent, not 97 percent — and 7.6 percent of black murder victims are killed by whites, not 2 percent. We don’t have reliable statistics on killings by police, but the Post’s data suggests those numbers are wrong as well.

So, who concocted this racist and thoroughly inaccurate graphic? The Post reported that it was first posted by @SexyPatriots early on Sunday afternoon. But with a bit of digging on Googles Images, Little Green Footballs found that @CheesedBrit posted the image late on Saturday night. Here’s all you need to know about that individual: 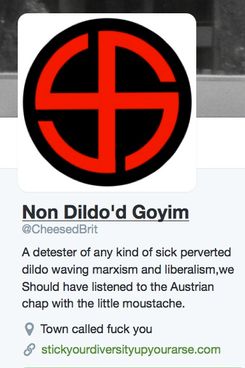 The funky swastika is the symbol of the German Faith Movement, a movement in Nazi Germany that wanted to move the nation away from Christianity in favor of Nazi and pagan-inspired religious practices.

It’s possible the graphic didn’t originate with @CheesedBrit, and there’s no evidence that Trump knew his source was a neo-Nazi Twitter account. Regardless, he needs to pace himself. At this point we have enough Trump controversies to fuel our family political arguments for the rest of the holiday season.