A weeklong series of ideas for improving urban life.

“Hands-free scooter,” “Swagway,” “clown conveyor” — whatever you call self-balancing personal transporters, you’ve also got to call them popular. Favored by the likes of Wiz Khalifa, Justin Bieber, and tweens the world over, these “hoverboards” that aren’t hoverboards are flying out of Chinese factories faster than toxic pollutants. BuzzFeed reports that there are at least 1,000 factories making them in Southern China alone.

But anyone who’s paid attention to the booming personal-transportation sector knows that these things are the least interesting devices in a category that promises to make your urban commute a lot more fun. Here are some favorites.

1. Ninebot One (pictured above)
What is it? Ninebot’s One is a small unicycle that balances and propels itself when a rider stands on the two foot shelves that fold out from the wheel. As with a more traditional unicycle, the learning curve is steep. Reports say three days are needed to master balance and controls. (Three weeks if you were born before Jaden Smith.) The customizable LED lights, on the other hand, are easy to figure out and make this device among the better-looking personal transporters.

User review: “I love it, feels like the future, but I am dreading the day when (if?) it malfunctions and sends me sliding face first across the floor.”  —Amazon

2. RocketSkates
What is it? A simpler, more classic alternative to the “hoverboard” craze, Acton’s Kickstarter-funded RocketSkates are electric Heelys for adults who still wear Heelys. Like most of its contemporaries, the RocketSkate is controlled with foot movements. Angle the front of your foot downward and the skates send you hurtling forward. Lift your toes and the brakes engage. Unlike most other personal transporters, though, the RocketSkate keeps your feet separated, leaving at least a remote possibility that if things go wrong you’ll be forced to do the splits.

User review: “In the process of learning to ride I did a lot of panic running: I went too fast, lost my balance and control over the skates, and inadvertently used my toes as a brake. That led to a few falls and some sore toes.” —the Verge

3. WalkCar
What is it? One of the more novel personal transporters, the WalkCar looks more like a laptop than anything you’re used to putting on your feet. It’s as easy to carry around as a MacBook, too. That’s kind of the idea, inventor Kuniako Saito told Reuters. “I thought, ‘What if we could just carry our transportation in our bags, wouldn’t that mean we’d always have our transportation with us to ride on?’” In practice, it’s an aluminum body atop a quartet of wheels that can reportedly hold 265 pounds and travel a tick over six miles per hour. Start it up by stepping on, and stop by jumping off. The WalkCar was supposed to hit Kickstarter last month, but according to a statement on its website, the initial attention the product got has its inventor doing work to “improve our product.”

User Review: None available yet.

4. Boosted Dual+ electric skateboard
What is it? It might look like a simple longboard, but there’s a major difference between the longboards of yore and Boosted’s Dual+. Namely, that this one doesn’t ask you to push. Just stand atop the fiberglass deck and a 2,000-watt motor carries you along as fast as 22 mph. If that’s too fast, the handheld control makes it easy to slow down and then get moving again once you change into a pair of dry pants.

User Review: “The wireless controller make this thing function like a remote control and you can actually drive it around while not onboard. If you were moving a box of junk down the street for example, you could set it on the board and walk alongside while remotely powering it all forward. Awesome.” —Electric Ride Review 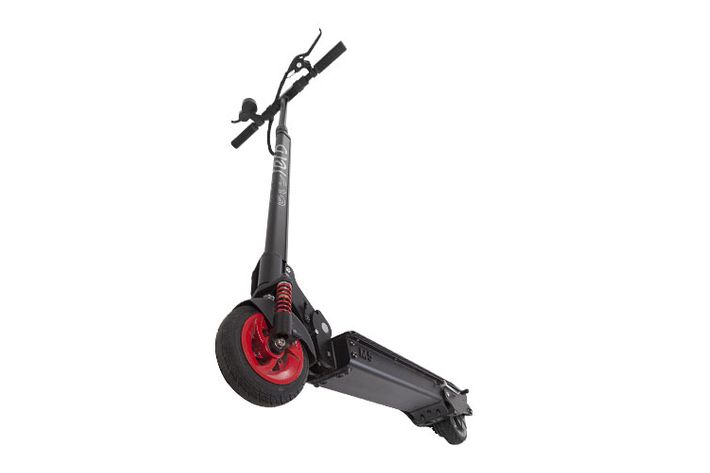 5. EcoReco
What is it? A self-propelled scooter for those who don’t quite trust self-balancing transporters to balance themselves. EcoReco’s M5 is a motorized Razor scooter that can reach 20 mph and scoot along for 20 miles on a single charge.

User review: “I easily pass those ‘tour-de-france’ cyclists, whizz by the delivery guys; and in traffic, it’s a dream. If you slow down, you can even get away with riding on the sidewalk for a short period of time if there are no people around.” —Amazon

6. Revelo Flex electric bike
What is it? Revelo’s Flex is a lightweight electric bike that can be folded into a compact package and pushed along the ground when you’re not atop the seat. And even when you are up there, there’s no need to exert yourself. The Flex might be called an electronic bicycle, but it will easily scoot along without any pedal power at all.

User review: “With a peak output of ~350 watts, this thing really zips! I was able to climb the driveway of my house easily and let a couple of my larger ~200 lb friends test it out.” —Electric Bike Review

7. RYNO Microcycle
What is it? Part unicycle, part motorcycle, all microcycle? The RYNO is a single-wheeled organism with a ton of power packed into its one fat tire. With a top speed of 10 mph, the RYNO is meant more for the sidewalk than the open road. All that’s required to operate it is the ability to lean forward and somewhere to go.

User review: “It’s hard to describe what it feels like to ride the Ryno, but the main takeaway is it’s much easier and safer than it seems. The vehicle really does balance itself without a hitch, and getting the hang of leaning forward and backward to accelerate and decelerate takes only a few seconds.” —Wired

THE FEED
22 mins ago
what we know
what we know
Highland Park Gunman’s Motive Remains Unclear: Updates
By Intelligencer Staff
Police say the 21-year-old shooter appears to have picked his targets at random. Two of the six people killed in the attack have been identified.
12:00 p.m.
sticker shock
sticker shock
Why Don’t Democrats Care About the Housing Emergency?
By Ross Barkan
Once the domain of big cities, the surging cost of rent across the country is driving record inflation.
9:00 a.m.
the group portrait
the group portrait
Abortion Is Still Legal in Trigger-Law States, Thanks to These Lawyers
By Sarah Jones
The post-Dobbs fight has just begun.

8:00 a.m.
the inside game
the inside game
The 3 Most Important Races in the Post-Roe Midterms
By Gabriel Debenedetti
“The stakes have gone up because these races are fundamental to protecting democracy and abortion rights.”
7/4/2022
plagued
plagued
The BA.5 COVID Surge Is Here
By Chas Danner
The worrisome Omicron subvariant, which is better at reinfecting people than any other, is rapidly gaining ground in the U.S.
7/3/2022
early and often
early and often
Read the Nastiest Lines From Trump’s $75 Burn Book
By Margaret Hartmann
The cash-grab coffee-table book Our Journey Together is filled with mean captions written by Trump himself. Here are his most unpresidential musings.
7/3/2022
life after roe
life after roe
Will Dobbs Change the Way We Feel About ‘Good’ Republicans?
By Ed Kilgore
It’s time to reconsider whether to keep lionizing people like Mike Pence and Liz Cheney.
7/3/2022
the city politic
the city politic
New York’s Primaries Were Decided by Politics As Usual
By Errol Louis
Despite national upheaval, the turnout and results remained distinctly normal.
7/2/2022
headaches
headaches
Yep, July 4 Weekend Air Travel Is a Complete Mess
By Chas Danner
More Americans are hitting the skies than did in 2019 before the pandemic, and the increased delays and cancellations will likely continue all summer.
7/2/2022
life after roe
life after roe
Could Dobbs Be Reversed Like Roe Was?
By Ed Kilgore
As the fight for abortion rights shifts to the states, advocates shouldn’t give up on eventually prevailing in the Supreme Court.
7/2/2022
games
games
It’s Not Too Early to Get Excited About a Subway Series
By Will Leitch
The Mets and Yankees are simultaneously great for the first time in ages.
7/1/2022
sports
sports
Brittney Griner’s All-But-Predetermined Trial Begins
By Benjamin Hart
The WNBA star is likely to be convicted and faces up to ten years in Russian prison.
7/1/2022
just checking in
just checking in
So What Is Rudy Giuliani Up to These Days?
By Margaret Hartmann
Trump’s former attorney has been keeping busy by dealing with January 6–related legal woes, making weird videos, and arguing with parade hecklers.
7/1/2022
the national interest
the national interest
The Democratic Party Needs Better Moderates
By Jonathan Chait
The centrists have lots of complaints but no solutions.
7/1/2022
the city politic
the city politic
Waiting (and Waiting) for an Adams Doctrine
By David Freedlander
Six months into a highly energetic mayoralty, how has Eric Adams changed the city — if at all?
6/30/2022
u.s. supreme court
u.s. supreme court
Supreme Court Agrees to Hear Case That Could Gut Voting Rights
By Ed Kilgore
Odds are good the conservative majority will confirm total legislative control of redistricting and (more alarmingly) of all election rules.
6/30/2022
off-season drama
off-season drama
The Nets May Be Truly Screwed Now
By Matt Stieb
Kevin Durant reportedly wants out, leaving Kyrie Irving as possibly the only superstar standing next year.
6/30/2022
the body politic
the body politic
The Abortion Stories We Didn’t Tell
By Rebecca Traister
How decades of silence left us unprepared for the post-Roe fight.
6/30/2022
early and often
early and often
Supreme Court Ends Term by Sabotaging Fight Against Climate Change
By Ed Kilgore
The finale to this devastating term was a landmark decision by conservative justices limiting the EPA’s ability to regulate greenhouse-gas emissions.
6/30/2022
crypto
crypto
Oh Look, RadioShack Is Edgy on Twitter Now
By Kevin T. Dugan
A marketing YouTuber is behind the zombie brand’s online resurgence, which is really a crypto gambit.
6/30/2022
explainer
explainer
Trump’s Long Campaign to Steal the Presidency: A Timeline
By Ed Kilgore
The insurrection wasn’t a one-day event. It was the culmination of a multifaceted, yearslong plot — and it isn’t over.
6/30/2022
life after roe.
life after roe.
Women Aren’t Saviors
By Sarah Jones
Liberation requires collective struggle.
6/30/2022
life after roe
life after roe
Biden: Scrap the Filibuster (Once) to Codify Abortion
By Benjamin Hart
The ultimate Senate traditionalist backs a more drastic approach for the second time in a year.
6/30/2022
the national interest
the national interest
Democrats Must Reform the Supreme Court to Save It
By Jonathan Chait
Republicans won control of the Court playing by the rules. The rules are bad.
6/30/2022
life after roe
life after roe
State Constitutions Are Now an Urgent Abortion Battleground
By Ed Kilgore
Now that Roe v. Wade is gone, state courts, and in some cases voters, will decide whether to give abortion rights constitutional protection.