A retired academic refused to help a 13-year-old girl with a school project last week because she is boycotting Israel.

Dr. Marsha Levine, a former senior research associate at the University of Cambridge McDonald Institute for Archaeological Research, is an expert in the origins of horse husbandry, the Telegraph reports, and Shachar Rabinovitch emailed her to ask a few questions, like where ancient horses lived and how humans bred them.

But Levine wasn’t interested in helping; she said she’d answer Rabinovitch’s questions “when there is peace and justice for Palestinians in Palestine.” 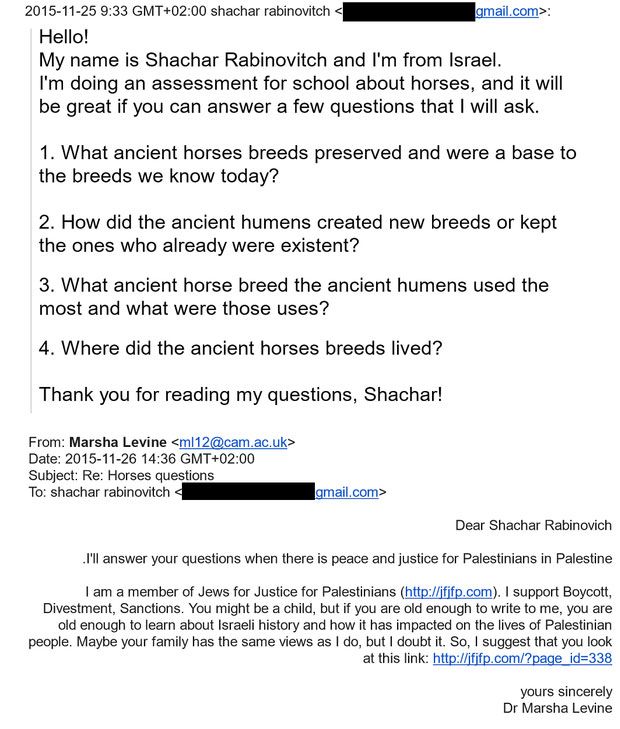 “In Israel the majority of Israelis support the policies of the government which abuses the rights of Palestinians, so the fact is I don’t want to help Israelis, and if you don’t start with children where do you start?” Levine told the Telegraph. “And she is not that young anyway, her English is pretty good. If people don’t stand up for justice, the world is going to come to an end.”

She added to the Jewish Chronicle, “I didn’t ask her to email me. I don’t know how she got my email address. I can do whatever I want … I said that when there is justice for Palestine I will answer her – that’s a fair answer.”

A spokesman from Cambridge University clarified that Levine is no longer a part of the faculty — she hasn’t been there since 2010 — and that her views are her own.

The Telegraph The Jewish Chronicle